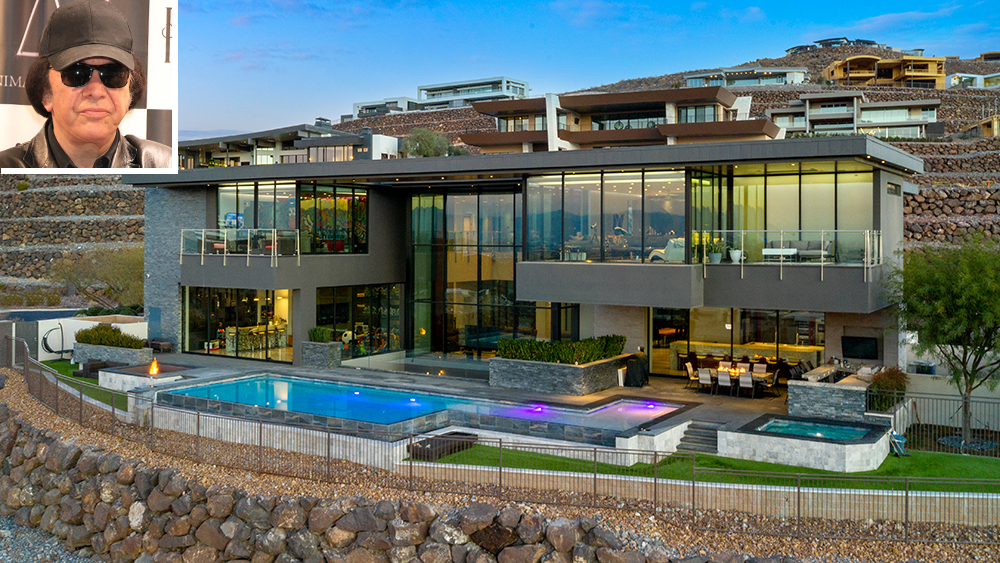 Earlier this year, KISS rocker Gene Simmons bet big on Las Vegas and dropped $10.8 million on a home there. Now he’s cashing out.

The musician and his family spent very little time at the luxe digs, according to The Wall Street Journal, because the weather in Sin City was too warm for their liking. So the 11,000-square-foot home is up for grabs once again—yours if you’ve got a spare $15 million.

It’s a sprawling mansion located in Ascaya, a tony community close to the buzzy Vegas Strip. Visitors enter via the private courtyard and walk through the “floating” pathway, which sits atop a koi pond. Spending time inside isn’t too different from lounging out-of-doors, as many of the living areas have massive glass walls that merge interior and exterior lifestyles.

The living room  Photo: Courtesy of The Ivan Sher Group

The home has six bedrooms and eight bathrooms, so there’s certainly room for another family to move in here. Naturally, since it’s in such a big party town, there’s entertaining space aplenty too. Downstairs there’s an 11-seat theater, a bar area and a 1,200-gallon saltwater aquarium. The infinity pool outside is another great perk for those who want to bring guests around.

The kitchen  Photo: Courtesy of The Ivan Sher Group

One of the listing’s most unexpected aspects is its garden. Simmons bought another, smaller piece of land to add on to the nearly-one-acre parcel and quickly had 130 trees added to the area. This all happened over the course of two days, so the next owner won’t have to fuss over landscaping.

The upper level  Photo: Courtesy of The Ivan Sher Group

Simmons has made quite a few real-estate moves this year. He sold his family home in Benedict Canyon in Los Angeles for $16 million after first asking for $22 million in October and then relisting it at $25 million in April. The rocker also just closed on a different residence in the City of Angels: a contemporary build in Beverly Hills that was last listed with Compass agent Tomer Fridman for $11.5 million.

The tree garden  Photo: Courtesy of The Ivan Sher Group

Simmons isn’t leaving Vegas forever: KISS is returning for a 12-show residency this December, which will run through February. Ironically, it’s touring that prevented the singer from putting down roots in his Sin City digs in the first place.

The home is co-listed with Evangelina Duke-Petroni and Ivan Sher of Berkshire Hathaway HomeServices Nevada Properties. Check out more photos below:

The pool  Photo: Courtesy of The Ivan Sher Group

A lounge area  Photo: Courtesy of The Ivan Sher Group

The deck  Photo: Courtesy of The Ivan Sher Group