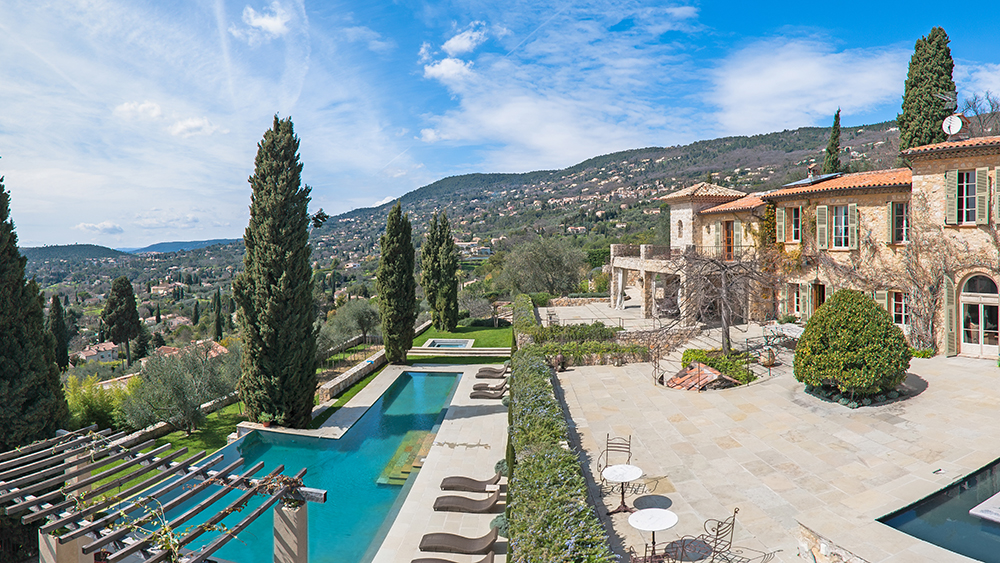 When sultry French actor and model Brigitte Bardot split from her film director husband Roger Vadim in 1957, she needed a sanctuary to escape the paparazzi.

The then 24-year-old found it at Le Castelet, a villa on the Côte d’Azur, up in the hills behind Cannes, with views of the earthy-red Esterél Mountains and the blue, blue Mediterranean.

Legend has it that she planned to buy the estate and call it home. That was until Bardot’s mother persuaded her to buy a less expensive villa “with a foot in the sea” in a sleepy fishing village called St. Tropez. The rest, as they say, is history.

Now the owner of Le Castelet, Swedish economist Bi Puranen, is selling the estate for $6.48 million after running it as a boutique hotel—weekly high-season rates start at $15,000—after acquiring it 22 years ago.

“Brigitte Bardot came to stay at Le Castelet in the spring of 1958, to the enjoyment of many young boys in the village,” explains Puranen in the hotel’s brochure. “One neighbor told us they climbed trees and walls along the alley to get a glimpse of the film star by the pool.” Maybe that’s another reason she sought out a different villa in once-sleepy St. Tropez.

Perched on a 1.46-acre hillside bluff a short croissant run from the quaint Provençal village of Peymeinade, the estate features a 6,458-square-foot, eight-bedroom main house and a separate five-bedroom guest house.

Within its tall stone perimeter walls, the estate has two swimming pools, three vineyards, an olive grove, artist’s studio, boules court and a traditional bastide stone tower. Plus a massive poolside terrace with a table big enough to host 60 guests for dinner.

While the main buildings date back to the 1800s, parts of the stone walls are from the 1200s. After “rescuing” the estate in 1998, Puranen spent more than 13 years restoring and modernizing the rambling, now air-conditioned, property while preserving its historic character.

Views stretch to the sea from the master suite.  Photo: Courtesy of Christie’s International Real Estate

A staircase inside that circular tower leads up to the second floor with its charming master suite. It comes with an adjoining library, a bathroom with ancient handmade tiles from Avignon and glass doors leading out on to a private terrace.

But it’s the grounds of Le Castelet that set the property apart. Two tiers of enormous stone decks are perfect for al fresco entertaining.

The upper deck, where Bardot basked in the sun, now features a serene Japanese reflection pool. Elegant stone steps lead down to a recently-added 75-foot-long infinity pool with underwater speakers.

Another of the villa’s 13 bedrooms.  Photo: Courtesy of Christie’s International Real Estate

On this deck are two huge covered loggias with an outdoor kitchen and pizza oven, along with a 150-inch drop-down screen—perfect for showing Bardot’s And God Created Woman, a 1956 classic.

The separate five-bedroom guest house has its own 60-foot heated pool. Tucked out of sight is a stone cabanon, or cabin. With its fireplace, Bang & Olufsen sound system and comfy sofa, it makes the perfect hideaway for that sunset glass of wine.

From here you can gaze out over the three vineyards growing Shiraz, Merlot, Cabernet Sauvignon and the local Mourvedre grapes.  Or across to the ancient olive grove with more than 100 trees.

As for the location, Le Castelet is a 35-minute drive from Cannes.