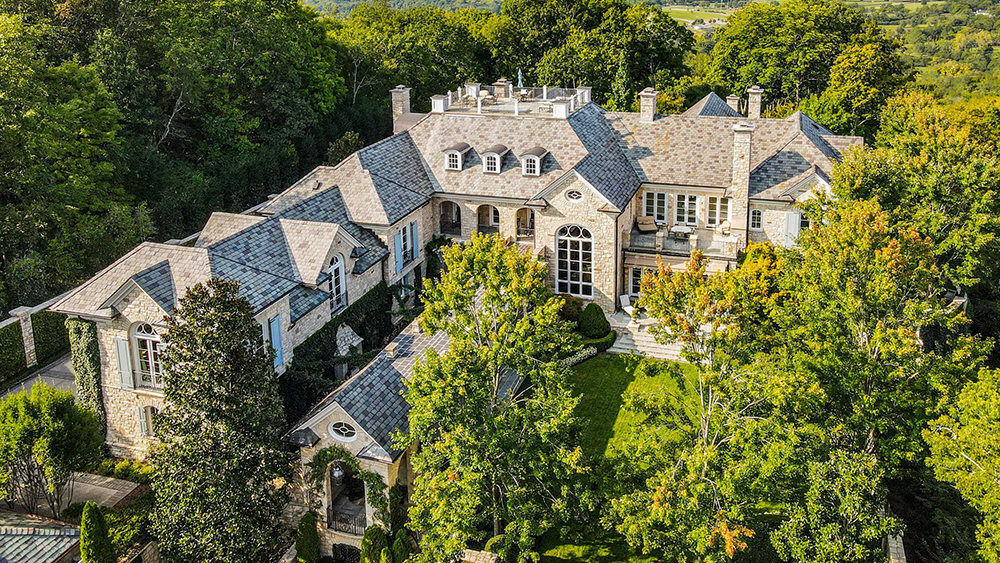 With its $23 million asking price, you can’t say that country singer Alan Jackson is letting his sprawling Tennessee mansion go for a song.

If it sells for anywhere close to asking, it’ll be one of the most expensive pads ever sold in both the state and in the celebrity-rich enclave of Franklin, just a line dance away from Nashville, aka Music City USA.

But the massive hilltop estate is certainly not short of curb appeal. Set on 4.3 private acres and surrounded by 120 more of dense woodland, Sweetbriar sprawls over 22,000 square feet, features five bedrooms, seven-and-a-half bathrooms and can garage up to 15 cars.

Country Music Hall of Famer Jackson—he’s sold more than 75 million records worldwide—and his author wife Denise, originally bought the spread in 2009 for $795,000. They commissioned architect-to-the-country-stars Ron Farris to design the imposing stone residence in a style that Farris describes on his website as “New England Country.”

Part of the home’s considerable attraction is its security and privacy. It’s part of the upscale Laurelbrooke community with a 24/7 guarded gate, while the heavily-wooded Jackson estate has its own set of imposing barriers.

A winding driveway climbs up to a large motorcourt in front of the main house. Inside the foyer, with its rich inlaid wood flooring, is a sweeping wood-and-wrought-iron staircase in front of a towering two-story window.

Decorated in a very traditional and elegant style, the interior is heavy on beautiful wood floors, paneling and arched windows.

Less stuffy is the wood-walled TV room with its belly-up bar and the 10-seat movie room.

Upstairs, the expansive primary suite features a cloister-ceilinged bedroom with doors leading out to a terrace. There are also dual bathrooms, one with a huge, marble-edged soaking tub with tall French doors that open on to a balcony.

Outside there’s a pool and pool house, a large expanse of manicured lawn, a paved area around a firepit and a vast, covered, poolside loggia with stone arches and stone fireplace.

Jackson is said to own another 84 in the area—the main house also includes a sizable roof-top deck with multiple tables and sun loungers.

For car lovers, the home’s twin, stone-faced garage buildings will no doubt be a considerable draw. Inside there’s room for around 15 cars in heated and air-conditioned luxury.

Jackson is well-known for his motoring passion. No one knows for sure how many cars he owns, but his eclectic collection is said to include everything from a 1929 Bentley Le Mans and a 1928 Stutz Black Hawk Boattail Speedster to an array of 1970s American muscle cars, an Amphicar and a 1977 Ford Bronco.

Pride of place in the collection however, goes to a refrigerator-white 1955 Ford Thunderbird convertible—the car Jackson bought when he was 15 and took his wife out in on their first date. Seems he later sold the car for a down payment their first home. Denise Jackson surprised him by buying the car back for his birthday.

Before building the Laurelbrooke estate, the Jacksons lived in an 18,600-square-foot, custom-built antebellum mansion on 135 acres in Franklin, also called Sweetbriar, which was supposedly modeled after Tara in Gone With the Wind.

After first listing that home for $38 million, they sold it to Copart salvage car auction founder, Willis Johnson, for $28 million in 2010.

There’s no word on where the Jacksons and their three daughters plan to move to when they sell. Just don’t expect it to be too far away from the Grand Old Opry.

The patio at night.  Photo: Courtesy of French/King Fine Properties