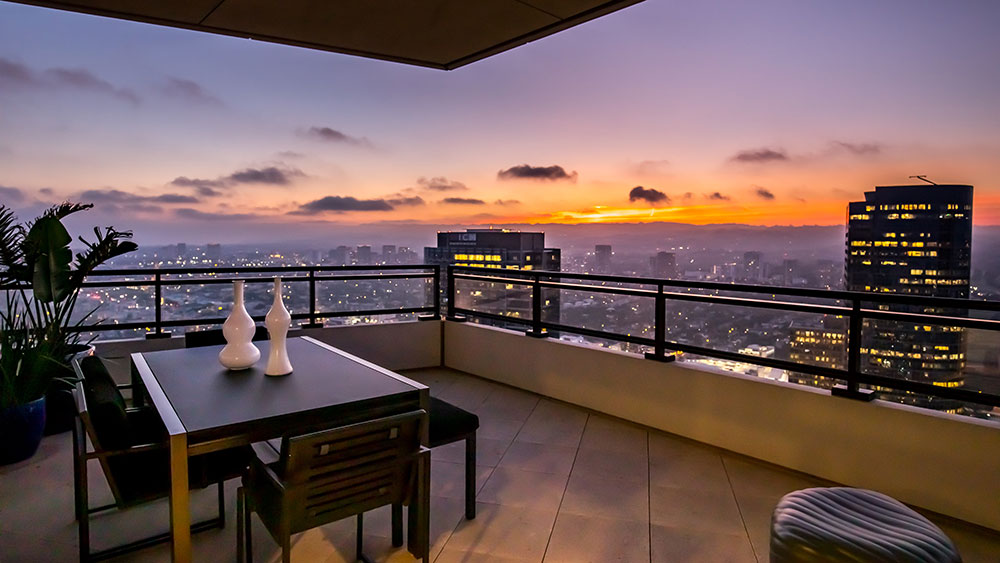 There’s a reason they call it the “Mansion in the Sky.”

Occupying the entire 40th floor of the super-luxury Century high-rise in LA’s Century City, this sprawling condo covers a massive 9,300 square feet and delivers vertigo-inducing views in every direction from its four terraces.

The space now has four huge bedrooms, a living room that could double as a convention center lobby and a Hollywood-style screening room to watch those endless Friends reruns.

One of the condo’s multitude of highlights is the vast master suite with its endless walls of curvy glass, cozy fireside area, his-and-hers sprawling bathrooms, giant walk-in closets and, if those weren’t big enough, a separate dressing room.

Add to these the grandest of living rooms, with its floor-to-ceiling windows giving breathless views of Los Angeles to the ocean and the Santa Monica Mountains. If you can take your eyes away from the vistas, there’s a pool table and fireplace.

We don’t quite know what to make of Perry’s love of fuzzy crushed velour for the soft furnishings and carpets. Or his passion for Batman memorabilia, which fills the hallway display cabinets.

Same goes for the condo’s spacious screening room: It’s green velour here for the big, cushy sofas, and brown for the carpets, walls and ceiling.

As for those nose-bleed balconies, the biggest is off the living room with space for a large table, while the other three open-up from the kitchen, den and master bedroom.

Arguably the real appeal of the home is that it’s in the coveted and paparazzi-proof Century tower at 1 West Century Drive. Designed by skyscraper specialist Robert A.M. Stern and completed in 2009, the 140-unit building soars 42 floors high.

While Perry’s place is billed as a penthouse, the building’s true penthouse is owned by Candy Spelling, widow of the late TV mogul Aaron Spelling. Her two-floor residence takes up the entire 41st and 42nd floors above Perry, and covers a whopping 18,000-square-feet. Back in 2010, she paid $34.8 million for the place.

As for Perry, listing agents Greg Holcomb and Cassandra Petersen, of Compass, says the actor and playwright is selling because he’s spending more time in New York. When he heads back to LA, he typically hangs out at his Malibu beach house.

Check out a few more photos of the Mansion in the Sky below: