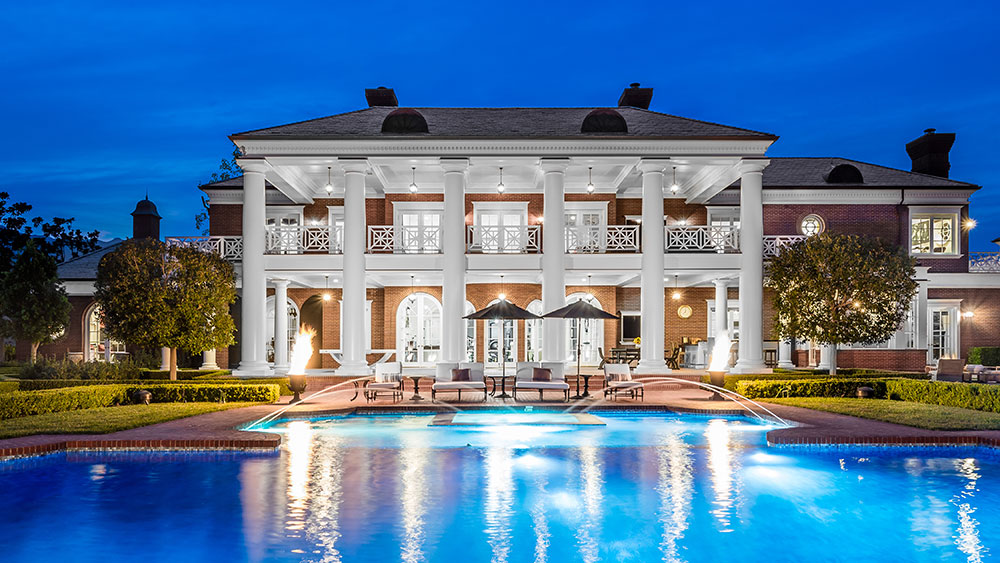 The hockey legend they call “The Great One” is finally letting go of the sprawling Colonial-style mansion in Thousand Oaks, north of Los Angeles, that he built in 2002, sold in 2007 and bought back in 2018.

Gretzky, 59, called on fellow Canadian, mega-mansion architect to the stars, Richard Landry—he’s done homes for everyone from Tom Brady and Mark Wahlberg to Rod Stewart and Michael Bolton—to design this Gone With The Wind-style, columned Colonial on the elevated lot.

After the estate’s completion in 2002, Gretzky, his wife Janet and their five children lived in it for five years. But during that time, the hockey star was working as head coach for the Phoenix Coyotes. Tired of the commute, he bought a mansion in Arizona.

Gretzky ended up selling the California property in a lucrative off-market deal to former baseball star Lenny Dykstra for $18.5 million.

According to reports at the time, Dykstra planned on flipping the home, but the 2008 financial collapse saw no takers. He dropped the price to $14.9 million and then $9.9 million, before heading into foreclosure.

Hard to believe, but two years later in 2010, the mansion, now slightly run-down, was sold at auction to investors for an unthinkable $760,000. They reportedly held on to it until 2013, flipping it for $9.5 million.

When the Gretzkys decided to return to Southern California in 2018, they remembered their old house and successfully bought it back for $13.5 million.

The view from the back balcony.  Photo: Carsten Schertzer/The Luxury Level

“In the two years they’ve lived here, they have spent literally millions of dollars on renovations and landscaping,” listing agent Arvin Haddad, of The Agency tells Robb Report. “The interior wasn’t in the best condition, so they had to do a lot of expensive work to bring it back. The detailing is now beyond remarkable.”

The motor court at the front of the home.  Photo: Carsten Schertzer/The Luxury Level

From nearby Westlake Village, you pass through the Sherwood Country Club guard gate, and meander past the Jack Nicklaus-designed course to the entrance of the Gretzky estate.

A gravel driveway leads to a circular motor court with its central fountain, large porte cochere and steps up to an imposing front door flanked by white columns.

The double-height foyer features lovely archways and a grand curved staircase up to the second level.

Unfortunately, from an interested viewer’s point of view, that’s about as far as the images will take us. Even in the listing there are only interior images of the entryway and the high-ceiling kitchen with its marble countertops and island and professional-grade appliances.

“The Gretzkys really prefer their privacy, even when selling their home. That’s why we haven’t released any interior shots. But trust me, inside, the home is magnificent,” says The Agency’s Haddad. But maybe the Gretzky’s don’t really want to part with their personal palace. Again.

One real highlight, Haddad says, is the home’s 2,000-square-foot master suite. It features dual bathrooms and closets, a sitting room with cozy fireplace—one of six in the home—and access to that truly expansive terrace at the rear of the main house, with views over the pool and west to the mountains.

Exterior highlights include a championship-size tennis court hidden on two sides by towering hedges; a stand-alone one-bedroom carriage house connected to the main house by an open bridge; and a pool, pool house and entertaining area with barbecue and wood-burning pizza oven.

According to reports, the Gretzkys are selling to move closer to their 31-year-old daughter Paulina and her PGA-star fiance Dustin Johnson, 36, in West Palm Beach, Fla.

Maybe in a couple of years their old California estate will be back on the market and ready for the Gretzkys to snap it up again.