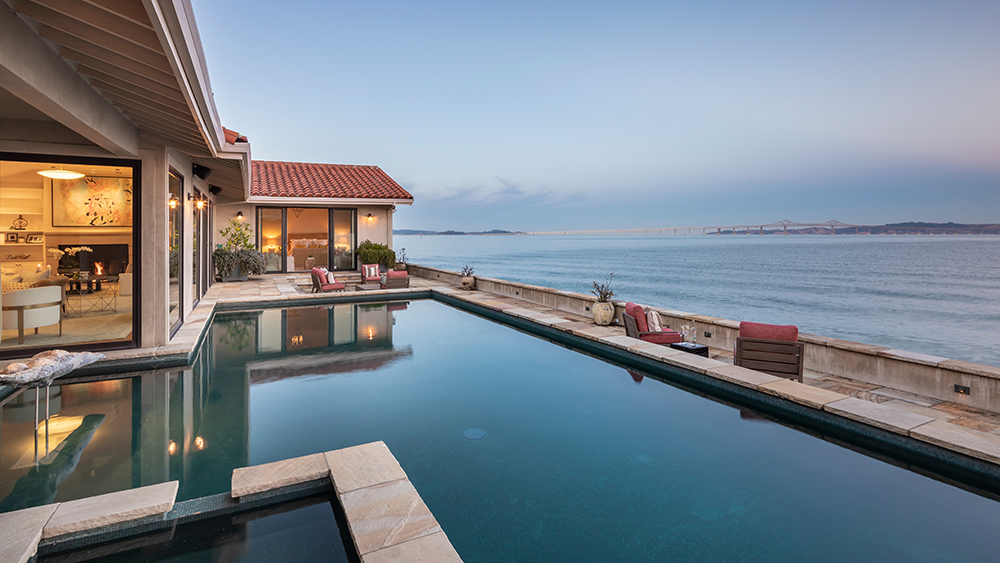 Five years after superstar actor and comedian Robin Williams took his own life, his Northern California home overlooking San Francisco Bay has gone on the market for $7.25 million.

The understated, unpretentious single-story house in the low-key enclave of Tiberon, 10 miles north-east of the Golden Gate Bridge, occupies a double lot in the close-knit boating community of Paradise Cay.

The overwhelming appeal of the home is its wide-open views across San Francisco Bay, east towards Richmond and the Richmond-San Raphael Bridge. Making the most of its water views, the house features floor-to-ceiling windows and a sprawling waterfront deck, pool and hot tub.

The star of iconic movies Mrs. Doubtfire, Good Morning Vietnam and Good Will Hunting, Williams bought the house in 2008 for a reported $4.05 million. A local boy, he went to school at the nearby Redwood High in Marin County and always called the San Francisco Bay Area home.

Following his death in 2014, at 63, the home was transferred to a trust tied to his widow, Susan Schneider, who is now selling the property.

The Mediterranean-style house, built in 1987, sits on a small peninsula that’s part of Paradise Cay. Constructed in the ’60s, the community was one of the last landfill developments allowed in San Francisco Bay. Today, around 225 homes—mostly valued at a fraction of the Williams’ residence—make up the community that includes the family-centric Tiberon Yacht Club.

Surprisingly for such a high-profile former owner, the front of the home is wide-open to the street with no imposing gates or high fences to shield from prying eyes.

Covering just more than 6,500 square feet, the property has six bedrooms and 6.5 bathrooms. The cozy cathedral-ceiling living room with its fireplace offers truly spectacular views across the bay through a wall of floor-to-ceiling sliding glass doors.

The tile-floored, eat-in kitchen has doors that open out onto the waterfront patio, as does the formal dining room. An adjoining media room features a large flatscreen and a state-of-the-art custom video gaming system.

The master suite with direct access to the deck.  Jacob Elliott

The lovely master suite offers south and east-facing bay views, access to the pool deck, along with huge his-and-hers closets. The master bath features a steam shower for two and a free-standing soaking tub with more bay views.

Along the wide hallways are four more ensuite bedrooms and a study that could double as a sixth bedroom. The cozy, wood-paneled library features a fireplace and gorgeous wide-planked, hand-scraped walnut floors.

Of course, no one knows how Williams’ suicide inside the home five years ago, might affect the sale. Real estate appraiser, Randall Bell, director of Landmark Research in Dana Point, Calif. is a specialist in assessing properties where tragedies have occurred and recently told Realtor.com that the effect would likely be minimal.

“The fond memories of Robin Williams will probably offset the negative aspects of the suicide,” said Bell. “I think it will ultimately sell at full value. But it may take longer because it’s a tricky situation.”

It took almost four years for the late actor’s sprawling 640-acre Napa Valley estate and vineyard to find a buyer. After being listed in the summer of 2012 for $35 million, Villa Sorriso—the Villa of Smiles—sold in 2016, two years after the actor’s death, for a $18.1 million.

The listing for the Paradise Cay home is held by Penny Wright-Mulligan and Haley Wright of Compass.