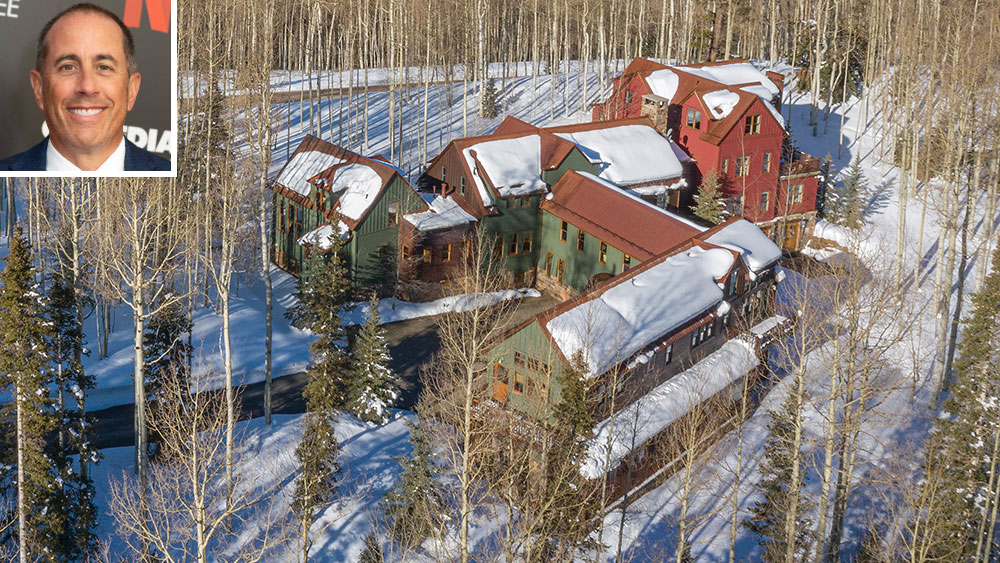 Now that ski season is coming to a close, comedian Jerry Seinfeld and his wife, Jessica, have not one, but two Telluride, Colo., estates on the market. For the larger property—about 27 acres—and its house, they’re asking $14.95 million. For the smaller one—on a mere 17 acres with just a four-bedroom home—the price tag is $2.78 million, according to The Wall Street Journal. The second parcel will first be offered to the buyer of the main house. “It’s another spectacular home, says Compass listing agent Bill Fandel, surrounded by aspens and with dramatic views.

This isn’t the first time the bigger residence has been on the market. In 2011, after a massive renovation, the 12,500-square-foot home was listed for $18.25 million but then was taken off the market. Now, with the price drop and buyers looking for secluded, resort-style retreats, the timing might be better. The home is being sold furnished, so you could enjoy the same view Seinfeld that did from the same leather recliner.

The double-height windows let in the light.  Photo: Joshua Johnson

The larger home has 11 bedrooms, 14 bathrooms and a spacious kitchen suitable for feeding a full house with its commercial appliances, acres of countertop space and several dining areas. Done in a modern farmhouse style, warm wood paneling and reclaimed plank flooring pervades both the entertainment and private spaces, with beams crisscrossing the ceilings. The double-height living room has a massive stone fireplace, plenty of sunshine and views of Wilson Peak.

A gym, yoga studio, lower level rec room with ping-pong and other games, a wine room, gear room for skis and other toys round out some of the amenities (alas, there’s no baseball diamond like the one at his Hamptons pad). The heated garage surprises by holding only four cars—Seinfeld is a known Porsche collector. But he does have other several other places to park that collection. But the garage also has a few bells and whistles for auto enthusiasts, including the ability to wash cars inside it, even in winter. Outside there’s a 5,500-square-foot deck and miles of manicured trails for cross-country skiing and snowshoeing in winter and hiking, running and mountain biking in summer. The trails cross over Turkey Creek and lead into the abutting National Forest.

A stone fireplace is the focal point (besides the view) for the living room.  Photo: Joshua Johnson

Built in 1991, the home was purchased by the couple for $7.55 million in 2007, according to Fandel. It was originally built for a Hollywood director and was featured in Architectural Digest in 1994. When the Seinfelds bought it, Fandel says, “They completely reimagined and expanded the house.” The outdoor terraces are heated so they can be used year round. The cobblestone driveway is also heated to melt snow and ice. But unlike many other homes in ski towns, “it’s as good a summer house as it is a ski house,” Fandel says. “In some places the outdoor spaces and yards are overlooked, but not here.”  It’s located just 10 minutes from Telluride’s ski resort.

In addition to the Colorado and Hamptons estates, the Seinfelds have bought and sold many properties in Manhattan, their home base, as well as in Los Angeles.

A look at the whole shebang  Photo: Joshua Johnson