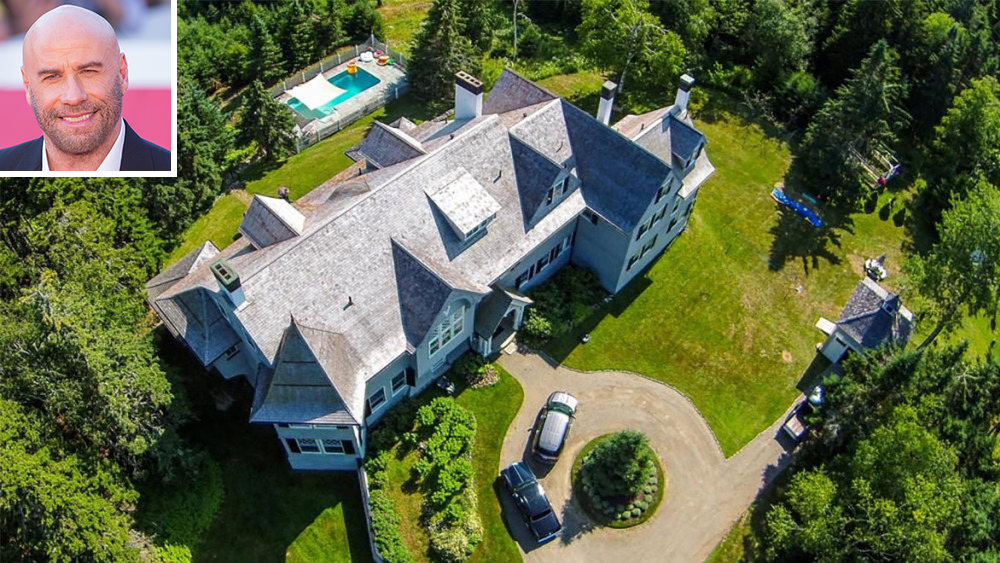 Even before Kelly Preston passed away last summer, two years after she was diagnosed with breast cancer, she and John Travolta began to change up their sprawling cross-country real estate portfolio. In 2017, the longtime Scientologists added a $3 million waterfront spread in Clearwater, Fla., the headquarters of Scientology, and in the fall of 2019 they plunked down another $2.65 million for a 7,500-square-foot Mediterranean residence in the celeb-favored and ever-more expensive LA suburb of Calabasas. And then, in early 2020, they sold the family’s long-time estate in a particularly prestigious pocket of the L.A.’s tony Brentwood neighborhood in an $18 million off-market deal to music manager (and next-door neighbor) Scooter Braun.

The Gotti star, who co-starred last year in Kevin Hart’s series Die Hart, on the spectacularly flamed out mobile platform Quibi, also maintains a sprawling, airport-like residence at the Jumbolair fly-in community near Ocala, Fla., where the licensed pilot parks his fleet of planes, including a Boeing 707, in the backyard. However, the twice Oscar-nominated movie star has now decided to part with the family’s beloved getaway on the exclusive, ferry-accessed island enclave of Islesboro, Maine, putting the secluded waterfront hideaway on the market at $5 million.

The hip-swiveling Saturday Night Fever icon first visited the semi-remote island more than 30 years ago with his longtime showbiz pal (and fellow Scientologist) Kirstie Alley, who has long owned a waterfront property at the south end of the island. Looking for a place they could put up their extended families over holidays, the then newly wedded Travoltas jumped at the opportunity to scoop up their idyllic 48-acre estate and its hotel-sized mansion in 1991.

At the end of a gravel driveway that passes under a canopy of trees and through stone pillars before it circles up around a perfectly conical pine tree, the shingled “cottage” was designed by the architecture firm Peabody and Stearns and built in 1904 for “the scion of a prominent banking family,” according to Architectural Digest, who featured the somewhat quixotic 42-room mansion in 1999 after it was done up for the Travoltas by classically trained decorator Christopher Boshears in a festively colorful, pattern-mixing manner than befits an elegant English country house.

The foyer operates a little like a hotel lobby with intimate conversation areas and a fanciful bar, while a double-sided bubblegum pink damask sofa whimsically anchors the center of the vast living room in front of a rustic fieldstone fireplace.
The margarine-hued dining room will comfortably seat more than a dozen around a polished wood pedestal table long enough to play shuffleboard.

The estate spans some 48 acres.  Realtor.com

A second-floor sun porch, one of two in the house, has serene views into the surrounding woods and features an explosion of pastel colors with tons of mismatched floral throw pillows and cozy lap blankets that allow for the comfortable enjoyment of sunny but crisply cold autumn afternoons and dewy spring mornings.
Glass-fronted cabinets in the huge pantry are stocked with dozens of delicate teacups and vintage cake stands, while the sun-filled country kitchen is simply outfitted with butcherblock counters and expensively equipped with chef-grade equipment.
The mansion’s 20+ bedrooms share just 7.5 bathrooms spread out over three floors. Large enough to accommodate a sitting and a private dining table, the main bedroom has a vintage-style bath of its own, along with a fireplace and private sun porch.

Fourteen guest bedrooms share just four bathrooms on the second floor, while the third floor was converted to Fantasyland children’s wing complete with a schoolroom and library, a diner, a theater space with a built-in stage, and four themed bedrooms: a Princess Room and Peter Pan Room among them, according to A.D.

The rambling residence sits a good distance from the shore, but the property includes a stunning stretch of thickly wooded water frontage with a deep water dock on humorously alliterative Sabbathday Bay. The secluded estate also includes a carriage house, where the automobile (and airplane) collecting actor once kept a vintage 1977 Rolls Royce for joyriding around the island, and a swimming pool set in a sunny clearing below the back of the house.

Some of the estate’s most unspoiled acreage is conserved as part of the Islesboro Island Trust, according to listings held by Brian Wickenden at Legacy Properties Sotheby’s International Realty.
Check out more photos below: