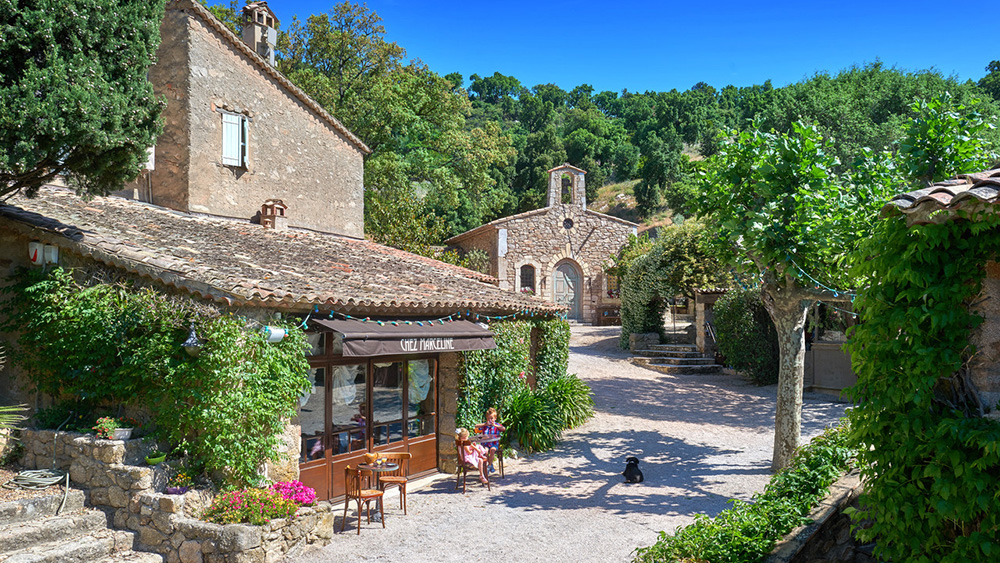 It’s possible the quirky actor, known for his role as Jack Sparrow in the Pirates of the Caribbean movie franchise, is reading the times right. After months of being cooped up in private residences, who wouldn’t want to own an estate like this: It’s actually an entire village, complete with a bistro, a wine cave, a skate park and several houses. Once abandoned, the village sits in Provence’s Le Plan De La Tour, a small region about a dozen miles outside of the Côte d’Azur hot spot of Saint-Tropez. It’s loaded with charm, as well as bathrooms—count them, 14—and bedrooms (15), dispersed over six guest cottages and one main residence.

The village church was converted into a guest cottage.  Photo: Courtesy of Gibson Sotheby’s

Depp purchased the compound in 2001 for an undisclosed amount and went on to spend millions renovating the 19th-century buildings, according to Toptenrealestatedeals.com. All this was during the 14 years he spent in a relationship with French actor and singer Vanessa Paradis. The couple spent time there with their two children, Lily-Rose and Jack, enjoying the village’s two swimming pools, dining at the onsite bistro Depp named Chez Marceline and exploring the lush surroundings, featuring 300-year-old oaks, olive trees and vineyards, until their split in 2012. Depp is reported to have decorated the structures himself.

The 4,500-square-foot main residence includes five bedrooms and three-and-a-half baths, while one of the six guest homes was originally the town’s church. The village also includes a covered wagon with a bath and kitchen, a full gym, a pirate-like lair and an art studio, along with outdoor dining in the town square. Square footage for the living spaces has been reported to be between 12,900 and 14,500 square feet.

Depp is reported to have decorated the restored spaces himself.  Photo: Courtesy of Gibson Sotheby’s

A cave suited to a pirate  Photo: Courtesy of Gibson Sotheby’s

One of two pools on the property  Photo: Courtesy of Gibson Sotheby’s

The once-abandoned village is just miles from the port of Saint-Tropez.  Photo: Courtesy of Gibson Sotheby’s