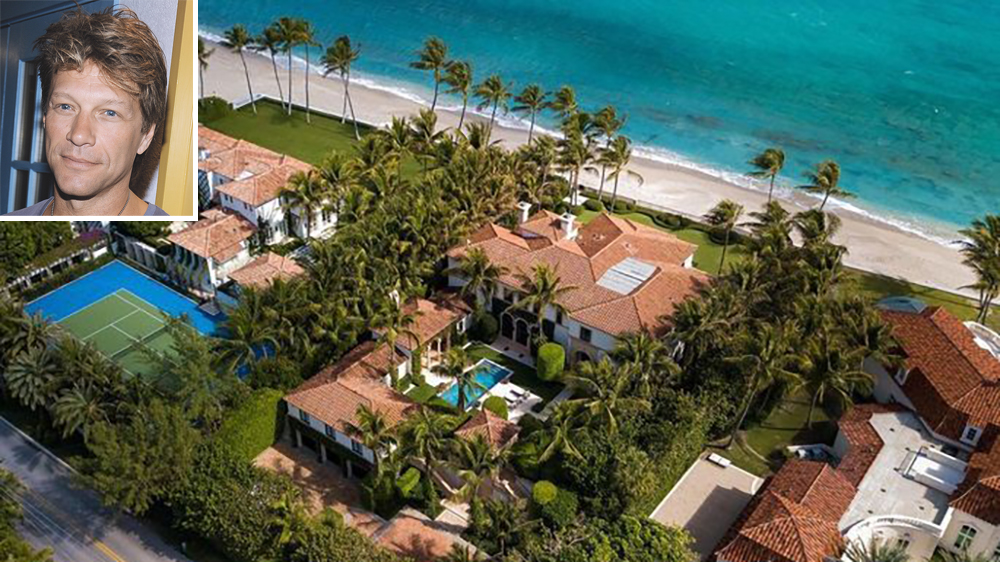 Despite the fact that Covid-19 has put a major damper on in-person concerts, veteran rocker Jon Bon Jovi is still keeping the money rolling in through his house flipping side hustle. In 2018, the silver-maned singer dropped $10 million on an ocean-view home in mega-posh Palm Beach, Fla., that he promptly razed and replaced with a brand-new villa. Now, he’s sold the property for a little less than $20 million. But that sale was just a warm-up. On the very same day that the villa sold, Bon Jovi also sealed the deal for a $43 million ocean-front mansion a couple of miles away, as was first reported by The Real Deal.

The newly built, recently sold villa sits on a lot that measures in at about one-third of an acre and has five bedrooms, five full and three half-bathrooms in about 5,000 square feet. Originally listed in May for $22.9 million, the home was built by the Shapiro Pertnoy Company with interior design by Caroline Rafferty. The casually elegant villa has a relaxed coastal feel about it with a light color scheme and a buttery, stone-accented exterior. Wire brushed oak and creamy limestone flooring can be found throughout the house, while herringbone-patterned cypress planks cover the ceiling of the cavernous living and dining room. And, for the book lover, the spacious library features custom, built-in shelving.

The eat-in gourmet kitchen is stylishly outfitted with bespoke light gray custom cabinetry, top-end appliances and an iridescent, mosaic-tiled backsplash. Other notable features of the home include an elevator and a handy backup generator for when hurricanes blow through. The back of the house wraps partially around a wind-protected central courtyard that gives way to an outdoor kitchen. Checkerboard terracing and a verdant wall of tropical plants accent the area around the swimming pool and spa, and a simple wrought iron gate provides access to the beach, which is actually located across a public street.

Bon Jovi’s newest acquisition is a substantially larger mansion located just a couple of miles away, which first popped up for sale in January with a hefty $44.9 million price tag. Spanning 10,232 square feet, the seaside manse has seven bedrooms and seven full bathrooms (plus five powder rooms), including a one-bedroom guest or staff suite with a convenient outside entrance. There’s also a vast owner’s retreat, which is comprised of a private study with a morning bar, plus an oceanfront terrace, two bathrooms and two huge walk-in closets.

Designed by Thomas Kirchhoff with interiors by David Kleinberg, the sumptuous mansion offers a double-height foyer with inlaid marble floor, spacious living and dining rooms embellished with coffered ceilings, and an ocean-facing library wrapped in lustrous paneling. More casual, but equally ample family quarters include a chef’s kitchen with white marble counters, a cozy breakfast room and a sea-view double-height family room with a trio of floor-to-ceiling arched French doors. Outside, an arched dining loggia overlooks a courtyard swimming pool, while two oceanfront loggias look across manicured lawns dotted with swaying palm trees. Other luxuries include an exercise room, temperature-controlled wine cellar, an elevator, a back-up generator and an air-conditioned three-car garage.

With the right updates, and given its impressive dimensions and supreme location, it’s not inconceivable the estate could follow the pattern of sky-high priced sales in the blazing hot Palm Beach market over the past year. These include the Kennedy family’s former compound, which sold for a staggering $70 million, and two estates on the famed Billionaire’s Row, located near Donald Trump’s Mar-a-Lago, that each sold for over $100 million.

Bon Jovi has been a prolific collector of expensive homes for years, but his foray into house-flipping is a fairly recent development. He still owns a four-bedroom and 4.5 bathroom condo in New York City’s West Village that he paid almost $19 million for in 2017, as well as an East Hampton mansion he picked up back in 2004 for $7.6 million. His lavish French chateau-style manse located in Middletown, N.J., known as Hight Point Estate and designed by world-renowned architect Robert A.M. Stern, was put up for sale in 2017 and remains for sale at an undisclosed price that has been speculated to be around $20 million.