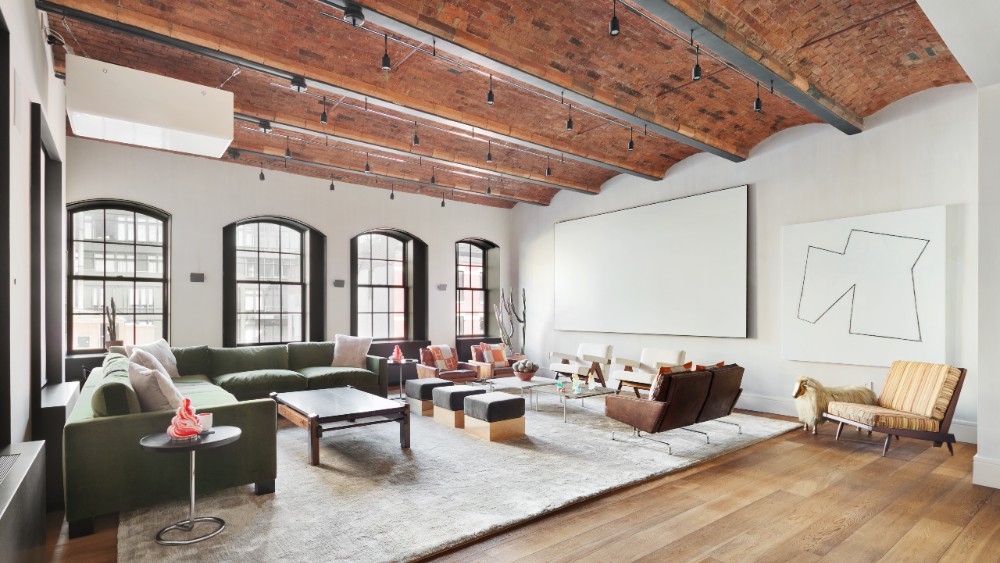 There’s nothing funny about this sale.

Actor Jonah Hill is officially parting with his New York City condo, which recently hit the market for $11 million. Hill scooped up the apartment in 2015 for $9.16, so if sold for the asking price, he’ll make $1.83 million from the sale.

Located in the NoHo neighborhood in the prestigious Schumacher building at 36 Bleecker, Unit 5A boasts soaring, 12-foot barrel-vaulted ceilings with exposed brick. The unit has some of the highest ceilings in the buildings, and the barrel-vaulted style gives it plenty of character.

Dining area and living room  Will Ellis from DDReps

The prewar building was constructed in 1920, and while many design elements are retained (like the ceilings), the unit has been redesigned to include contemporary features like 7.5-inch wide-plank, white-oak floors, blackened steel accents and custom lime washed walls perfected by an artisan.

The condo was initially built as a four-bedroom loft, but has since been converted to three bedrooms, resulting in extra spacious rooms. The primary bedroom feels like its own separate wing and has four large windows allowing in plenty of natural light. The en suite bathroom is also awash in natural light, as it has two large windows, and there are two Calacatta marble baths.

The primary bedroom  Will Ellis from DDReps

The bedroom’s seating area can also be converted into another room or lounge space if desired. It looks over the building’s private courtyard garden, which features beautiful landscaping and perfect city views. The courtyard was designed by Ken Smith, known for creating the 17,000-square-foot private rooftop garden at MoMA that is off-limits to the general public.

The expansive 22-foot-by-34-foot great room is a rarity in New York, and it’s perfect for entertaining. The living area has four large windows and ample seating, and also featrues a custom-made projector and screen for theater-like entertainment. Just off the living room is a dining area and the chef’s kitchen with Calacatta marble countertops and a slab stone island with marble waterfall. The custom cabinetry, outfitted in a sleek dove gray hue, is stunning.

The kitchen features a slab stone island with marble.  Will Ellis from DDReps

There is also plenty of wall space for an avid art collector in the living areas, foyer and gallery. Keeping in mind today’s discerning buyer, a Crestron smart technology system has been installed within the home, making it easy to control lighting, shades and invisible speakers from a tablet or phone.

The Schumacher has just 20 units and was once a print atelier. The facade still reflects the Romanesque Revival architectural style in which it was originally built.

The bright bathroom featuring a Calacatta marble tub.  Will Ellis from DDReps

Secondary bedroom  Will Ellis from DDReps

There is plenty of space to hang art on the walls.  Will Ellis from DDReps

There is a custom projector for at-home movie nights.  Will Ellis from DDReps