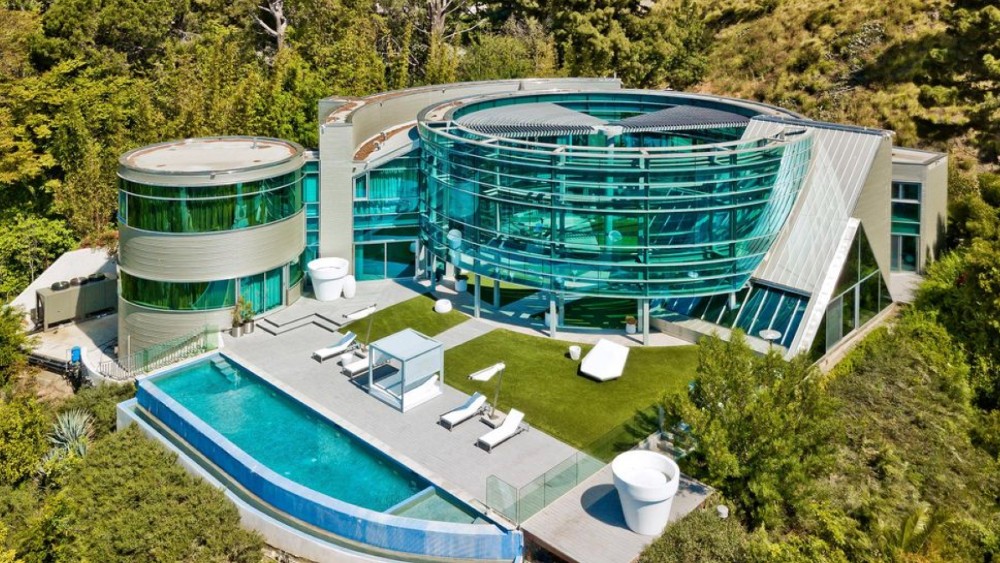 Salad spinner. A stack of CDs. The BBC Television Centre. These are all phrases that have been used to describe 1169 Loma Linda Drive in Los Angeles on Twitter. Its distinct architecture might have gone unnoticed by the general public…had it not happened to be the former residence of one Justin Bieber.

Yes, the “Yummy” singer once called this Beverly Hills pad home—once. Contrary to what many tweeters seem to believe, Bieber never owned the house, he only rented it—and paid close to $60,000 per month for it, five years ago, in 2015.

The mansion was designed by Ed Niles and completed in 2009. Its large, modernist aesthetic is one of many in the renowned architect’s oeuvre—from an industrial California beach house, which asked $53 million but is now no longer on the market, to another oversized glass house in Malibu that sold for $4.2 million in January.

This isn’t the only LA home that’s been ridiculed for its architecture: Pharrell Williams just listed his large, glassy Beverly Hills home for $17 million, which also got plenty of social media hate. Keyboard-courageous critics likened it an office building or college campus.

For its part, the Loma Linda Drive address features six beds and six-and-a-half baths, 7,500 square feet of living space and an elevator, infinity pool and six-car garage. Funnily enough, though, commenters issues with the design turned out to be the same as Bieber’s—the pop star decamped after a short two months there because of the unwanted transparency the glass façade provided for paparazzi, according to Highsnobiety. It was last available for sale for just shy of $15 million, but is currently not listed on the MLS. We can’t help but think that some unknowing assistant must have rented it sight-unseen for Bieber for its square footage, Beverly Hills location and great views.

A look inside one of the living room spaces.  Zillow

This isn’t the home’s first encounter with Internet fame. It was also the main site of popular YouTuber Jake Paul’s “It’s Everyday Bro” music video, which has netted over 250 million views since it was uploaded in 2017.

But where oh where, then, is Bieber living now? The singer has two new, markedly less flashy properties to his name: a $5 million estate in Ontario, Canada, and an $8.5 million Beverly Hills pad. A move might happen soon, though—while Bieber purchased the latter in March of last year, he’s already thinking of offloading it, as he posted on Instagram in October that, “I wanna sell it I think anyone interested?” No word yet if anyone’s taken him up on the offer.

Check out more photos of the “salad spinner” home, below:

One of the bedrooms.  Zillow