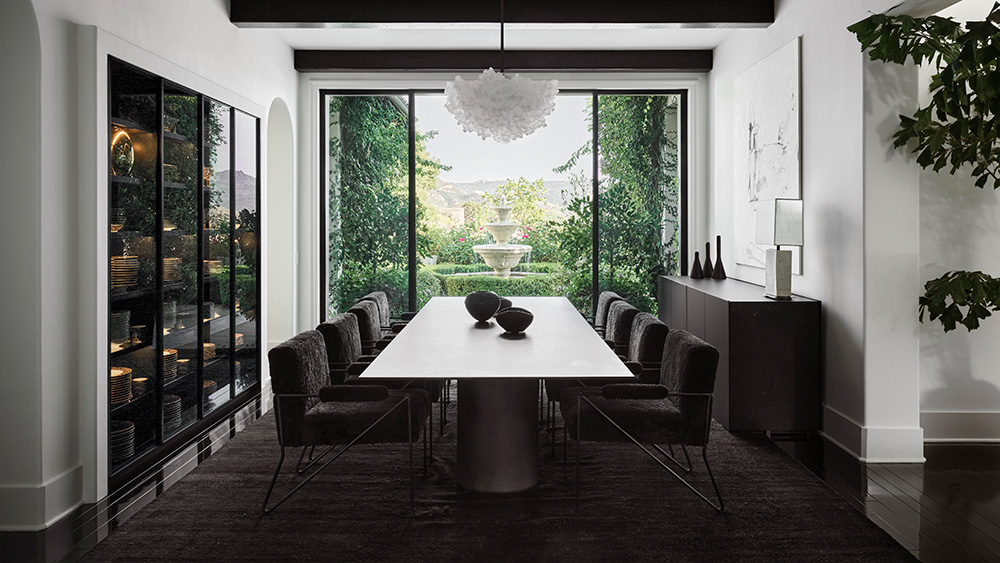 Her fans might not realize it, but not only does Khloe Kardashian have an eye for fine design, but she also has a bit of a green thumb. Located inside the exclusive gated community of the Estates at the Oaks, her former 10,000-square-foot mansion has its own guest house and more than an acre of land with postcard-perfect, protected views of the nearby canyon. In her backyard gardens she cultivated orange, kumquat, lemon, lime and pomegranate trees. “So many people used to tease me, ‘You’re like an old lady with your garden!’” she says. “I’m really proud of what I’ve created because it means so much to me.”

The home’s new owners must have appreciated her hard work as well: Kardashian sold the property in an off-market deal in November for $15.5 million to Dhar Mann, a YouTube star and cosmetics entrepreneur. That’s more than double what she paid six years ago when she purchased the estate from Justin Bieber. The house also now holds the impressive distinction of having the highest price per square foot of any home ever sold in Calabasas, a posh suburb, just outside of Los Angeles.

“This is a trophy property through and through, being one of 16 properties that sit on the mountain range,” says agent Tomer Fridman, the Kardashian family’s go-to realtor. “And given the estate’s proximity to central LA, the double-gated privacy and security and the years of remodeling and meticulous care, the value is unmatched in like homes nearby.”

The sweeping staircase in the entryway.  Photo: Douglas Friedman

Kardashian’s most recent remodel was done by celebrated designers Tommy Clements, Kathleen Clements and Waldo Fernandez. Although she had only been in her Spanish Mediterranean-style home for a few years when she connected with them, Kardashian realized the home’s original design was no longer in line with her current aesthetic. “My house was definitely beautiful to start with, but it was pretty busy. It wasn’t as clean and simple as I wanted.” she says. The Clements and Fernandez team had previously worked on the homes of several of family members, so she felt confident they would be able to create a pared-down design that would still be unmistakably her. “They still let me have a little bit of my glam pop,” she says.

Equally important, the designers were willing to let her have as much input into their vision as she wanted, which, as Kardashian will admit, is a lot. “I am so annoying to probably most people,” she says. “I’m very controlling and micromanaging. That’s just my personality. Not that I ever thought they weren’t going to do a good job; I just have to know things and touch things: ‘And where exactly is this going? And what are the dimensions of this?’” she says she would ask them.

That being said, Kardashian trusted their judgement and didn’t tag along for every scouting trip. Rather, the designers would present her with their carefully sourced selections, and she would choose from there. “She really reminds us so much of [her mother] Kris, because Kris is the same way. Kris is very detail-oriented and OCD-clean. Everything is so dialed-in and so put together all the time, and Khloe’s the exact same way,” says Tommy Clements.

The directive from Kardashian was not only to streamline the home’s design, but to create a seamless transition from her exterior to interior spaces. With many of her siblings and mother living nearby, she loved to entertain there, especially hosting gatherings that could move fluidly from the living room to her outdoor kitchen space and back again.

The bar has a touch of her “glam pop.”  Photo: Douglas Friedman

The six-month-long renovation began with opening up the windows and doors on the first floor, so that virtually every room had access to the many spaces outside, as well as better views of the mountains in the distance. “Originally, there were a lot more walls up, and it made the rooms a little bit dark,” says Tommy Clements. “We also replaced the smaller French doors with larger, single panes.”

The result is a stunning home that is airy, light-filled and the ideal blend of the designers’ and Kardashian’s tastes. “They were so good at marrying their aesthetic and the needs of their client,” she says.