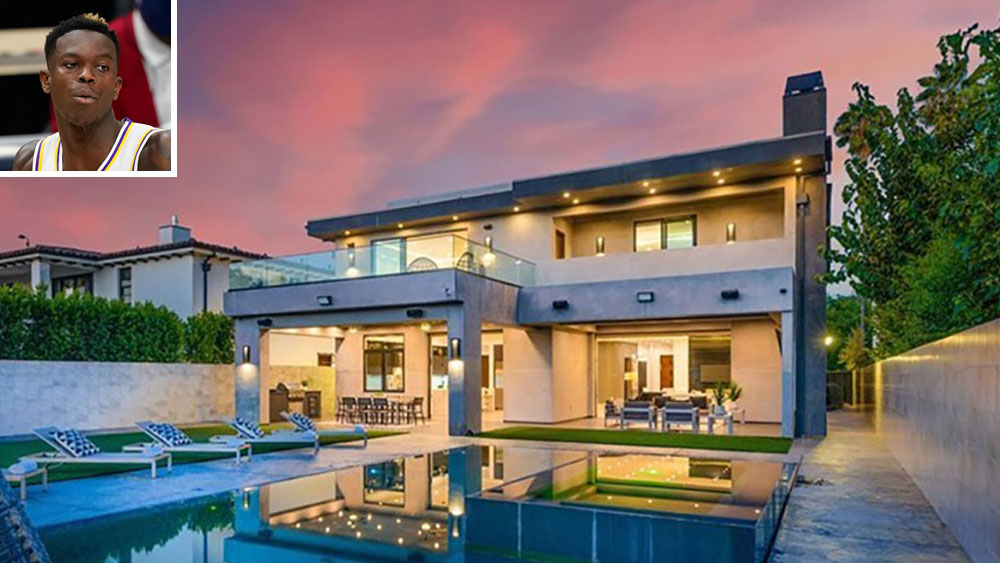 Last November, German basketball superstar Dennis Schröder was traded to the Lakers following stints with the Atlanta Hawks and Oklahoma Thunder. Records reveal the 27-year-old Braunschweig native — who is currently eyeing a potential contract extension worth tens of millions — and his wife Ellen Ziolo have now put down some SoCal real estate roots in the form of a $4.3 million San Fernando Valley mansion purchase.

The sexed-up contemporary estate lies in Tarzana, set on a long and narrow lot behind forbidding black walls and gates. Built in 2017, the house offers a mostly wall-free floorplan with the dining, living, and family rooms merged into one open space. There’s a double-sided black marble fireplace, while the chef’s kitchen is “spectacular,” proclaims the listing, with an enormous SubZero fridge, custom cabinetry, and imported stonework. Two sets of Fleetwood doors open to a outdoor loggia with its own fireplace and full kitchen/BBQ.

Six ensuite bedrooms are arranged throughout the main house, including an upstairs master retreat with dual private balconies, dual dressing rooms, and a resort-style bathroom decked out in exotic wood and stone. Other impressive home amenities include a home theater that seats 10 moviegoers, an office space, and a glass-walled wine cellar tucked underneath the curvaceous main staircase. Perhaps the most unusual features is a vast rooftop deck with its own BBQ, spotlights, and over-the-treetops views of the pancake-flat San Fernando Valley.

But the main house is only the very first act of this real estate show; the .35-acre property is fully improved with a giant L-shaped lawn that passes by a large swimming pool/spa combo. Beyond that lies a two-story guesthouse with another ensuite bedroom and a second kitchen, plus room for a gym. Best of all, however — at least from Shröder’s perspective — is the concrete basketball court that lies at the far rear of the property, offering a secluded space to hone his professional game.

Check out more photos of Schröder’s new home below: