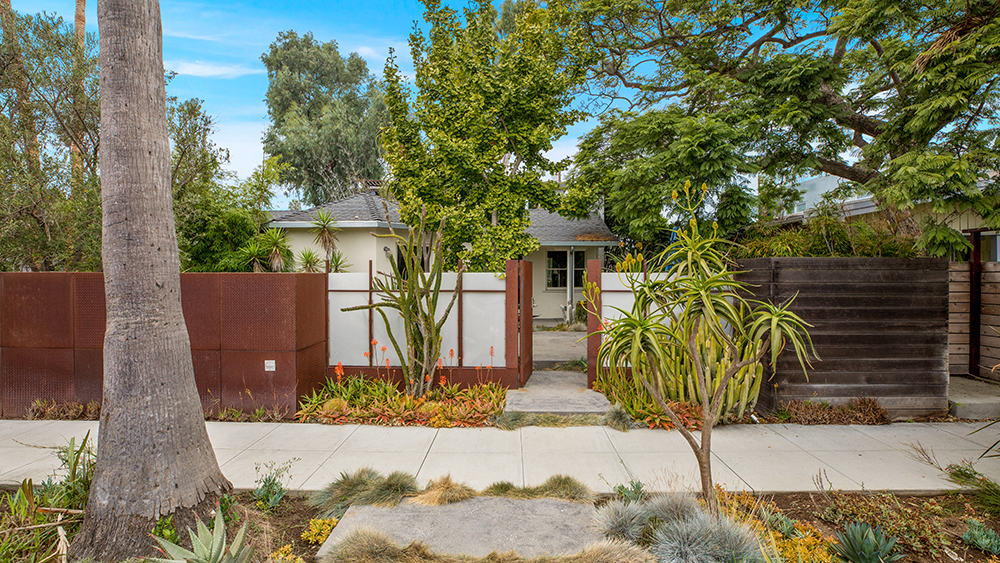 Lenny Kravitz and Lisa Bonet met at a New Edition concert in the 1980s and married in November of 1987. Then, just before Christmas of that year, they purchased a two-lot artist’s compound in LA’s Venice Beach. Zoë Kravitz spent her earliest years in the house. While the marriage lasted only six years, they hung on to the property until 2000. The current owners are another artistically minded couple who have been using the on-site artist’s space as a painting atelier. Now the 5,424-square-foot home and studio are up for grabs again for $7,795,000.

The creative vibe that infuses the four-bedroom, three-bath residence has been there since the early ’80s. Before Bonet and Kravitz lived there, it was owned by sculptor Guy Dill, renown for his massive and monolithic sculptures that can be found in museums such as the Guggenheim, the Museum of Modern Art and the Smithsonian, among scores of others around the world. The main home, a midcentury bungalow style, was built in 1949. Dill commissioned LA architect Steven Ehrlich to design an adjacent modern artist’s studio in 1980, which remains mostly in its original design, with a handful of renovations in the last few years. Ehrlich went on to become an architectural star and a founding partner of Ehrlich Yanai Chaney Rhee, a preeminent firm known internationally for its contemporary vision.

In 2019, the interior of the house was redone with a focus on new flooring, bathrooms and kitchen, featuring new high-end touches such as Grohe fixtures, a Sub-Zero fridge and a Wolf range and double oven. The two-level studio, with its soaring 30-foot ceilings, was renovated in 2014. At that time, an apartment dubbed the Treehouse was built, along with an additional bathroom and a second home office added to the original office in the loft, and more square footage was added to both the house and the studio. There’s also a large deck off of the office loft and apartment on the studio’s second floor, with a view to the Pacific.

The home leans green, as it’s powered by solar panels and has a whole-house water-purification system. Outside, the landscaping is lush, incorporating plants and trees from around the world that thrive in the LA sun and coastal breezes. Accessible through a private gate, the property is extremely secluded; you’d never know that a distinguished bungalow and huge artist’s studio reside behind that wall. It’s also just a short walk to Venice’s famous shopping and dining district on Abbot Kinney.

The renovated kitchen in the main house  Photo: Anthony Barcelo

While Kravitz and Bonet no longer share real estate, they remain friends. Kravitz has reportedly bonded with Bonet’s current husband, Aquaman actor Jason Momoa, and their two children, making one big, happy, blended family. As Kravitz has become embedded in the design world, he’s gone on to invest in real estate around the world, from a Beverly Hills mansion to a residence in Brazil and another in Paris, where Zoë Kravitz was married in 2019.

One of four bedrooms in the home.  Photo: Anthony Barcelo

All new flooring was added in 2019.  Photo: Anthony Barcelo

The office loft above the studio  Photo: Anthony Barcelo

The apartment above the art studio  Photo: Anthony Barcelo

The roof-deck has a view of the ocean.  Photo: Anthony Barcelo

The patio looking out to the studio, with its spiral staircase  Photo: Anthony Barcelo

Lush plantings from around the world grace the gardens.  Photo: Anthony Barcelo