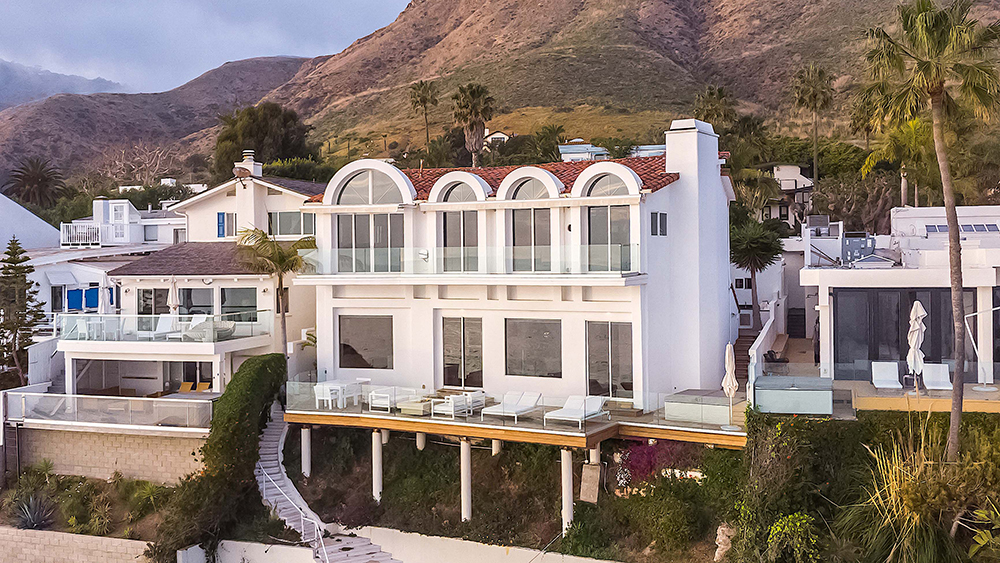 If you really do want to keep up with the Kardashians—Khloe and Caitlyn Jenner in this case—buy the chic Malibu beach house they used to rent.

It might look a little familiar. The home has made cameos in episodes of the family’s hit reality show Keeping Up With the Kardashians.

It’s a gorgeous, newly-renovated 4,456-square-foot spread with a gated driveway, direct access to Malibu’s Broad Beach, and spectacular views of the sunset and rolling Pacific.

That year, they reportedly rented it to Bruce Jenner (now Caitlyn) during the time he and wife Kris were calling it quits. Also on the renters’ list was Kris’ daughter, reality star and socialite Khloe.

The Roses first listed the home for $7.995 million in 2018, as well as offering it as a $25,000-a-month rental, which is when the Kardashian crew rented it. With no buyers stepping forward, it came off the market. It was re-listed in February this year for the same $7.995 mill.

Now the Roses are trying their hand with global online auction house, Concierge Auctions, with a virtual auction scheduled for May 27 through 29. And yes, there is a reserve, though it’s not being disclosed.

The deck looks out on the Pacific.  Photo: Courtesy of Concierge Auctions

“This property is the epitome of the California lifestyle,” says Rose, who in a former life was the actress and model Tiffany Mulheron; she’s graced the cover of Maxim magazine and starred in films like Guy Ritchie’s 2008 action romp RocknRolla.

“The beauty here is that it’s not just a beach house; it’s a full home on the beach that is extremely well-planned, traditional and spacious,” she adds.

Metal gates with leaping dolphins lead off Malibu’s Broad Beach Road into this two-story home distinguished by its quartet of domed windows set into the roof.

In its almost 4,500 square feet of hardwood-floored living space, there are four bedrooms and three-and-a-half bathrooms. The spacious master suite features a wood-beamed vaulted ceiling and large glass doors opening out onto a full-width oceanfront terrace.

Glass sky-lighted stairs lead down to the expansive, open-plan living room that flows into the sleek, stark-white kitchen. A wall of glass doors opens out on to a large deck offering those jaw-dropping, uninterrupted Pacific Ocean views. A free-standing hot tub adds to the viewing enjoyment.

The home itself is positioned on an elevated knoll that’s set back from the beach, with another row of properties in front. A private wooden staircase leads down to the sand of secluded Lechuza Beach.

The kitchen has views of the ocean.  Photo: Courtesy of Concierge Auctions

“You can go to the beach, but beach-goers can’t come to you, unless they’re invited,” says listing agent Rodrigo Iglesias, of Hilton & Hyland who is co-operating with the sale.

Bidding is set to open at 4 pm Pacific time May 27 at ConciergeAuctions.com. Serious bidders will first need to put down a $100,000 deposit.

Don’t be surprised if a Kardashian or two raises an online paddle to add the home to their burgeoning real estate portfolio.

The sun deck is just steps from a secluded beach.  Photo: Courtesy of Concierge Auctions

The home is in Malibu’s Broad Beach neighborhood.  Photo: Courtesy of Concierge Auctions