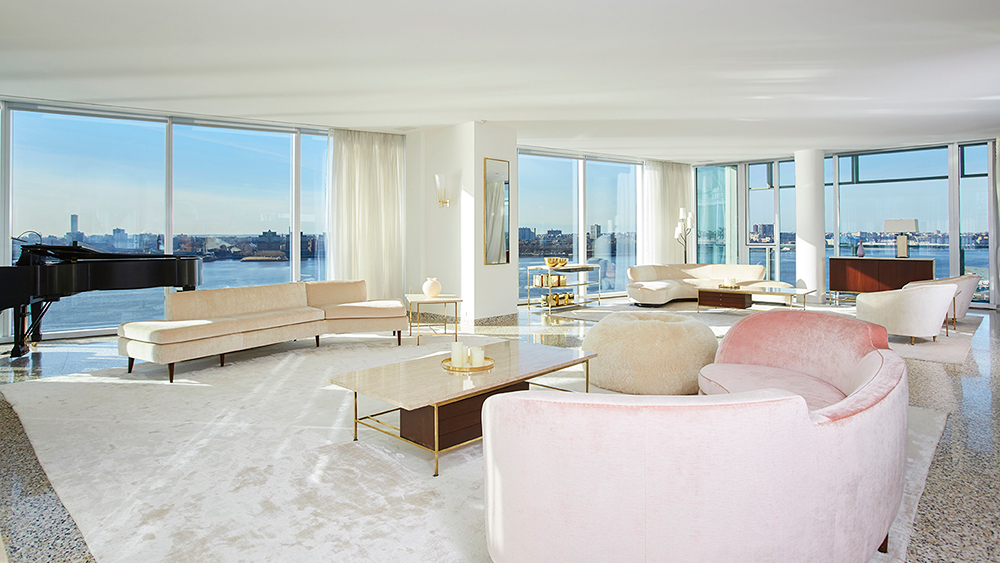 Set on three floors of the award-winning Richard Meier + Partners–designed 165 Charles Street building in the West Village, the condo is made up of four units that Ms. Stewart, 53, acquired between 2006 and 2007.

Joining them together created a truly spectacular space, like other inspired spaces we’ve written about. The main living/entertaining area takes up an entire floor, covering more than 1,800 square feet. It opens on to two spacious terraces with uninterrupted, floor-to-ceiling glass views of the Hudson River, One World Trade Center, the Statue of Liberty and Greenwich Village.

As you might expect of Martha Stewart’s daughter, the kitchen could be from the set of a Martha Stewart Living TV show. It features a huge walk-in refrigerator, two butler’s pantries, a wine cooler, state-of-the-art stainless appliances and acres of work surfaces to make those turkey meatloaf muffins.

Like the living room, the master bedroom takes up an entire floor and offers panoramic views of Midtown with the Empire State and Chrysler Buildings in the distance. The unit also includes an oversize, west-facing office with its own terrace, a dressing room lined with anigre wood, and a fully equipped gym.

The home’s lower level comes with a recreation/media room with river views and a terrace, plus three additional bedrooms with en-suite baths. All three floors are connected by a spectacular, free-floating bronze-and-terrazzo staircase.

Built in 2005, 165 Charles Street won the American Institute of Architects Housing Design Award that same year. Former occupants have included A-listers Natalie Portman and Nicole Kidman. Among the building’s many amenities are a 50-foot pool, fitness center and screening room.

Stewart is a former SiriusXM and Hallmark Channel host, appearing on the Whatever with Alexis and Jennifer show in the early 2000s. According to listing agent Richard Ziegelasch at Brown Harris Stevens in New York, she’s looking for a new home with more outdoor space for her two children and Staffordshire terrier.