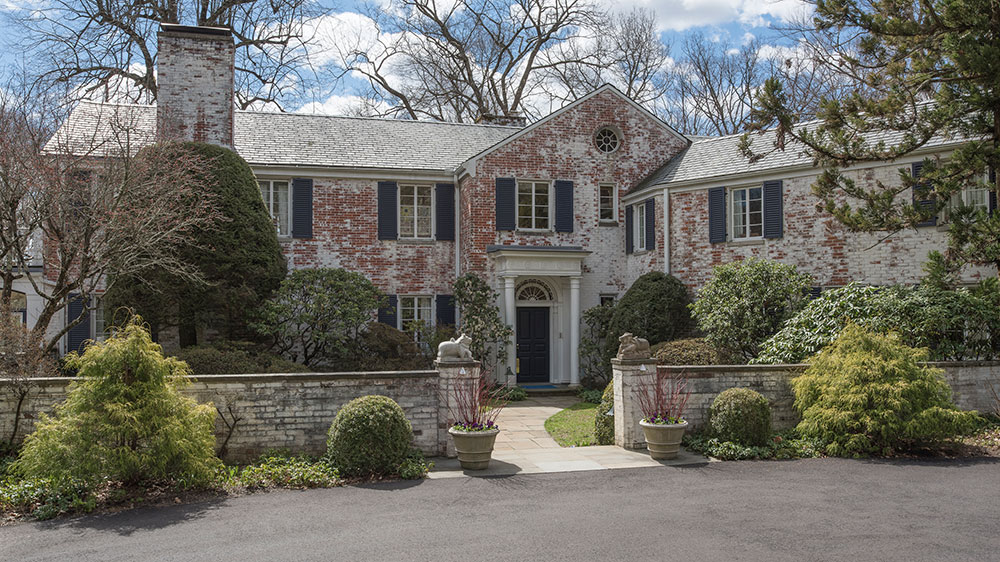 Music icon Paul Simon is slip, slidin’ away from his 32-acre rural Connecticut estate. The two-time Rock & Roll Hall of Famer and his singer-songwriter wife Edie Brickell, have just listed their home in New Canaan, an hour’s drive from Manhattan, for $13.9 million.

Tucked away at the end of New Canaan’s Brookwood Lane, the 8,500-square-foot, brick Georgian-style main house was built back in 1938.  Simon bought the estate in 2002, for a reported $16.1 million, from the family of Charles Dana, former CEO of global automotive component powerhouse Dana Corporation.

According to listing agent Leslie Razook, of William Pitt Sotheby’s International Realty, Simon’s favorite place in the home was the estate’s stand-alone 2,400-square-foot cottage, which housed the singer’s recording studio.

“Mr. Simon called it his ‘peaceful space,’ and it was here where he told us he put together his last four albums. The views from every window to the surrounding woodlands are just spectacular,” she says.

The property, a short walk to the Country Club of New Canaan, is set in 32 secluded acres surrounded by wooded hills, a stream with waterfalls, expansive meadows, and a great lawn leading down to a pond.

“The first thing we thought when we moved from Manhattan was ‘Wow! We have our own park,’” Mr. Simon said in a statement to the Wall Street Journal. “It took half an hour to walk a loop of the property with the dogs.”

It also proved to be a great family home. Simon and Brickell—she’s best-known for her 1988 hit “What I Am” with her band Edie Brickell and the New Bohemians—raised their three children here.

An imposing circular driveway leads to the elegant, slate-roofed main house, designed by acclaimed architect Harold Reeve Sleeper. Inside, there are six bedrooms, a large living and dining area, a big-windowed kitchen and a library. Outside there’s a terraced heated pool, courtyard, greenhouse and three-car garage.

Selling the property won’t bring in a big payday for the Simons.  At the $13.9 million asking price, it will mean a 16 percent loss over what the couple paid in 2002. According to Razook, it reflects a general softening of property prices in the surrounding Fairfield County.

The Simons have given no reason for selling their home of 17 years, though Razook says their kids are now grown-up and have moved out.

Chances are the couple maybe “homeward bound” back to New York City where they still own an apartment at 88 Central Park West, the landmark 1928 co-op building where neighbors include Robert De Niro and photographer Annie Lieibovitz.