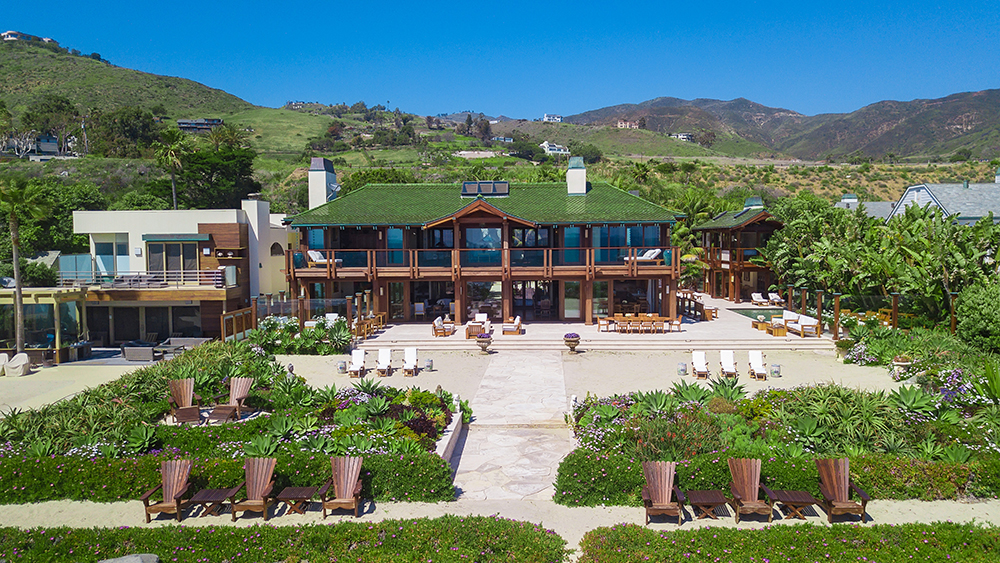 A former 007 is taking on what could be one of his trickiest assignments yet—selling his Malibu beach house.

Pierce Brosnan, perhaps best known for playing the titular role in four James Bond movies, is unloading his Broad Beach mansion for no less than $100 million. The Irish actor and his wife, filmmaker Keely Brosnan, commissioned the home after the success of his fourth Bond film, Die Another Day. The mansion’s Southeast Asian aesthetic is in fact inspired by Brosnan’s time shooting the movie in Thailand, according to The Wall Street Journal.

Of course, bringing the nearly 12,500-square-foot home to life was no small feat. Prior to building the house, the Brosnans lived in a ranch-style residence on the same plot of land, but it proved to be too small for them. The current residence took about a decade to complete.

They had some help, though—architects Ralph and Ross Anderson designed the resort-like property, and it was subsequently built by Albino Construction. The finished product sits on more than an acre of land with access to 117 feet of beachfront. The Brosnans dubbed it “Orchid House,” because, well, the landscaping includes plenty of orchids. (Plus palm trees and gardenias.)

Between the main house and the guest house, the home has five beds and 14 baths. The primary motif here is teak, which is ideal in oceanfront communities as the wood weathers the moisture well: The floors are wide-plank teak and the entry gates and cabinetry are made of the same material. Another architectural standout is the green clay tile roof, which was directly inspired by the temples in Thailand.

There’s a separate guest house on the property, plus a two-car garage.  Compass

Ocean views are also a priority—it’s so close, after all—so many of the interior spaces have large glass windows and doors that look out onto the crashing Pacific. The great room opens up to the beachside deck, and the adjacent kitchen, which has two islands and two stoves, also has a view of the water.

There’s a fire pit on the property for entertaining.  Compass

Two bedroom suites also occupy this main level, but it’s the primary bedroom upstairs that’s the real showstopper. The space takes up 4,000 square feet all on its own, and includes two bathrooms, a private deck and a large sitting area. Also upstairs is a private office and an additional guest room.

The amenities fit out the lower level, including a soundproof movie theater with tiered seating and a bar—great for mixing a martini and putting on your favorite Bond flick, naturally—and a gym, music room and spa with two soaking tubs.

One of hte outdoor dining areas.  Photo: Courtesy of Compass

Outside there’s the beach, obviously, but the Brosnans also installed a saltwater pool with a waterfall, plus two glass-enclosed areas for outdoor dining. The nearby guest house has two levels, so guests can enjoy a gorgeous view from their upstairs perch—or the whole building can be repurposed into a pool house. Also on the grounds is a two-car garage, which may be worth expanding for larger gatherings in the future.

The view from one of the decks.  Photo: Courtesy of Compass

That $100 million asking price is right in line for Malibu. Last year Whatsapp founder Jan Koum shelled out nine figures on a 14,000-square-foot home in the area. And Orchid House isn’t even the most expensive Malibu home on the market—that distinction belongs to a seven-bed, 10-bath property off Pacific Coast Highway that’s hoping for $125 million.

As for the Brosnans? They’ve decamped to Hawaii, according to The Wall Street Journal. So they’re still not too far from the beach.