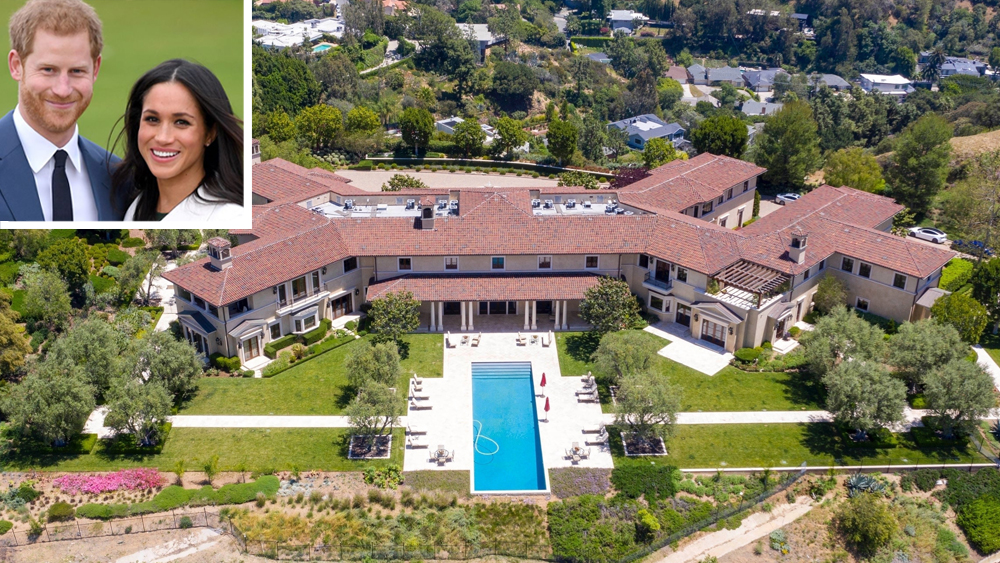 Although they’ve been living in Los Angeles for well over a month, it’s only now that Meghan Markle and Prince Harry’s choice of residential circumstances has been publicly unveiled. According to the Daily Mail, the high-profile couple has been social distancing in a titanic, double-gated 90210 compound long owned by Tyler Perry, whom they met through mutual friend Oprah Winfrey.

Though far less famous than its gated community cousins to the north—specifically, the celebrity-swarmed enclaves of Beverly Park and Mulholland Estates—Beverly Ridge is indisputably swank and arguably even more exclusive, with only 14 lavish homes hidden beyond its secured entrance.

Spanning nearly 25,000 square feet of living space, Meghan and Harry’s multi-winged temporary home easily qualifies as a bonafide megamansion. Records reveal Perry acquired the 22-acre Coldwater Canyon property in 2004 and subsequently spent untold millions—likely well into the eight figures—custom building the Tuscan-style behemoth, which offers 8 bedrooms and 12 bathrooms. At one point prior to the current structure’s completion, Kanye West toured the property and expressed keen interest in purchasing the hillside complex, though that deal was not to be.

Not only does the high-security fortress sit within a guard-gated enclave, it also features its own driveway gate, a slew of security cameras and a state-of-the-art alarm system. And Perry reportedly has his own private security team who monitor the premises at all times, making the estate an ideal residential choice for a world-famous young family.

While most of the Duchess and Duke’s new Beverly Ridge neighbors are not famous—several of them are wealthy, low-profile businesspeople from China and Indonesia—current homeowners do include Johnny Carson’s widow Alexis Maas, producer Eric Weider and developer Robert Rivani.

Perry has long been noted for his unrestrained appetite for palatial properties. At one point he owned a ludicrously huge, 35,000 square-foot beast of a home in the far suburban reaches of Atlanta, though that place was sold for $17.5 million back in 2016. Besides the 90210 digs, his current holdings include an enormous Georgia complex with its own private airstrip, a 17,000 square-foot house in Fairburn, Ga., and a 8,500 square-foot abode elsewhere in Fairburn.

And back in 2017, Perry paid $14.5 million for a glassy house overlooking L.A.’s world-famous Mulholland Drive. Less than a year later, he flipped that spread for $15.6 million to Pharrell Williams, who himself is now attempting to sell the unwanted house.

For their part, Meghan and Harry are currently shopping for a permanent L.A. estate, one that carries an eight-figure pricetag commensurate with their royal standing, naturally. The pair are widely believed to be hunting through all of L.A.’s priciest zip codes for the perfect spot—and from West Hollywood to the mountainous far reaches of Pacific Palisades.