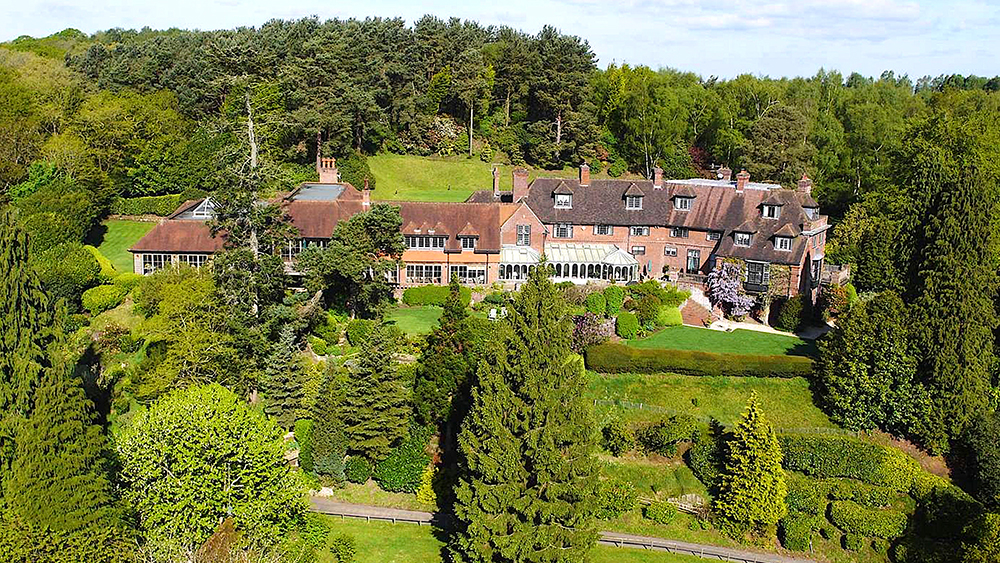 It’s not hard to tell rock and roll royalty once lived here. From the building in the grounds known as The Party Barn, to the bedroom with the sign on the door reading the Bob Geldoff Suite, to the recording studio in the home’s 450-year-old converted water mill.

Taylor, 70, the legendary drummer and songwriter with the Freddie Mercury-fronted band Queen, called Milhanger home for more than 24 years, living here from 1979 to 2003.

Built in 1907, the estate is a mile from the leafy Surrey village of Thursley and around 40 miles from central London. Sprawling across 70 wooded acres, it comes with all those rockstar country mansion must-haves like a tennis court, stables, six-car garage, a heated swimming pool and, naturally, a hot tub.

Taylor moved into Milhanger at the height of Queen’s popularity; the band had just released its News of the World album with such hits as “We Will Rock You” and “We Are the Champions.”

With cash in the bank, the drummer is said to have bought the estate from the Rutter family, whose daughter Lindy went on to marry Pink Floyd drummer Nick Mason.

Today, the estate is in some need of upgrading, which is reflected in the £5 million ($6.15 million) asking price. Back in 2014 it was listed for £7.95 million ($9.85 million), eventually selling in early 2018 to a Qatari business exec for around  6 million pounds sterling.

A crunchy gravel driveway leads to the brick Arts and Crafts-design main house, which includes seven bedrooms in its 17,755 square feet, including a vast third-floor master and the Asian-inspired Bob Geldoff Suite.

Seems the Boomtown Rats singer and Live Aid organizer was a close buddy of Taylor’s and a regular visitor to Milhanger. The sign is still on the door.

During Taylor’s tenure, he expanded the house considerably, adding a huge library/entertainment/billiard room that measures 72 feet by 32, and a 44-foot-long TV and games room on the second floor. On the first floor there’s a wellness complex with a 54-foot-long swimming pool, a gym, Jacuzzi, steam room and changing rooms.

The dated but vast, industrial-grade kitchen.  Courtesy of Savills

The pool pavilion is part of the wellness spaces.  Courtesy of Savills

Also on the grounds is a 10-stall stable block for the horse-lover in the family, a hay barn, a multitude of storage buildings, plus a six-car open bay garage.

The estate’s true surprise and delight feature however, is the former water mill known as Cosford Mill.

Rooms in the main house are spacious.  Courtesy of Savills

During his time at the house, Taylor reportedly used the mill as his recording studio when he was producing songs for his solo albums, like Fun in Space, where he performed all the vocals and played every instruments.

The formal living space on the first level.  Courtesy of Savills

The listing for the estate is held by Savills. Its property agent Ed Tighe explains: “Milhanger is ideal for entertaining on a grand scale, but equally suited to more relaxed family living.”

No doubt he’s hoping to drum-up plenty of interest in this stately estate and snare a buyer.

The guest cottage.  Courtesy of Savills

The stables.  Courtesy of Savills

The six-bay garage.  Courtesy of Savills

The charming pond and mill house that Taylor used as a recording studio.  Courtesy of Savills