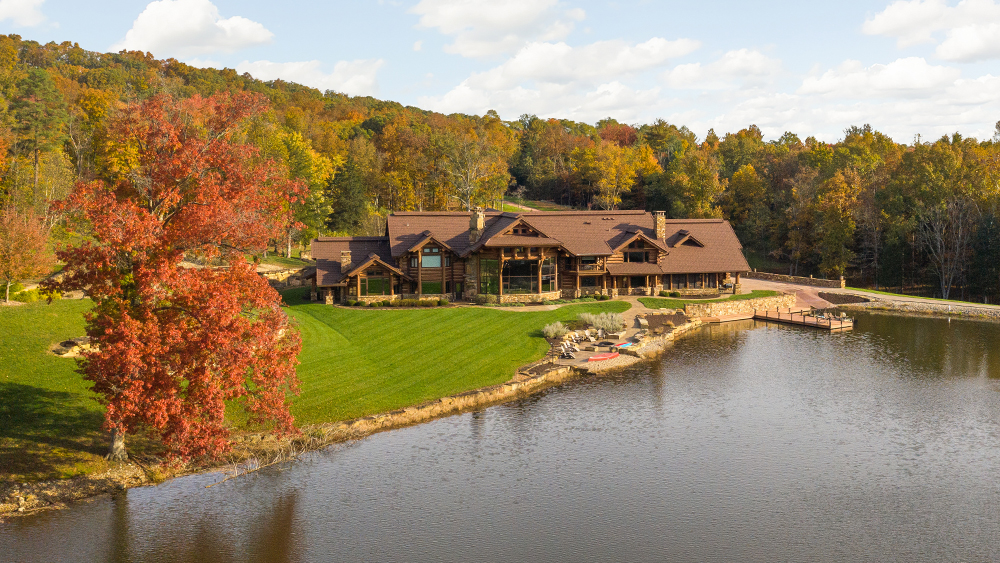 It’s been described as a cross between a Bass Pro Shops and a Cabela’s. But the massive log cabin-style Indiana ranch, owned by racing legend Tony Stewart, is arguably way more authentic.

Take the roughly 415 acres of land it sits on. It’s stocked to the brim with elk, deer and wild turkey. In front of the ranch is a nine-acre lake teeming with trophy bass just waiting to be hooked.

The ranch itself, known as Hidden Hollow, was built with lodge pole pine trucked in from the northern Rockies. The floors are made of white oak, red hardwood and stone imported from Texas. Indiana bedrock was used to build the two-level fireplace. “It is truly a unique, one-of-a-kind property that you simply don’t find here in Indiana. Its sheer size is remarkable,” Carrie Holle, listing agent with Compass Realty tells Robb Report.

The entry takes you over a stream fed by two waterfalls.  Courtesy Brock Childs/The Home Aesthetic

For the uninitiated, Tony Stewart is a NASCAR Hall of Famer, winner of three NASCAR Cup series championships and the only driver in history to have won championships in both IndyCar and NASCAR. He’s a legend. And while the 50-year-old, nicknamed “Smoke”, officially hung up his helmet in 2016, he’s co-owner of the Stewart Haas Racing NASCAR team, and still races stock cars in his Superstar Racing Experience series.

Stewart, who grew up in nearby Columbia, Indiana, bought his sprawling property back in 2009, demolished the house sitting on it and spent three years building his dream ranch. “This is truly my dream home,” he says in a statement. “This became my place to get away and relax with my family and friends. We’ve enjoyed every square inch of the land. The best part is that there is always something to do here. The land is great for hunting and fishing, off-roading or just sitting on the porch and enjoying the stars at night. It is the perfect blend of entertainment and relaxation.”

And he certainly has the “entertainment” part covered. The home comes with a massive 8,500-square-foot lower level that you could only describe as a “man cavern”. It comes with a full-service bar, gaming tables, a two-lane bowling alley, a gym, virtual golf room and stunning carved-wood pool table.

Taking pride of place at one end of the basement is Stewart’s collection of 200-plus racing helmets, plus a genuine IndyCar single-seat racer bolted to the wall. Nearby is the driver’s collection of vintage gas pumps and pinball machines. (And no, they don’t come with the home.)

Arguably even more jaw-dropping than the man-cavern is the rightly named Great Room. From the front entry, you walk over an actual wooden bridge spanning a koi-filled stream fed by a two-story waterfall. The rocks at its base are as big as most Buicks.

Taking pride of place in the living room is an 8,700-gallon freshwater aquarium filled with largemouth bass, carp, gar, perch and crappie. The tank is so big the maintenance guy has to don scuba gear to clean the bottom.

In total there are six ensuite bedrooms, eight full baths and a master suite as expansive as you’d expect. Don’t worry about window treatments—it’s all lake and woodlands as far as you can see. Need more space for guests? Close by is a separate, nearly 3,500-square-foot guest house that’s currently home to the ranch’s full-time games-keeper.

As for garaging, the listing talks about a six-car garage, which sounds a little on the small side for a confirmed car guy. Compass’ Holle explains that one of those huge, nondescript standalone buildings on the property is home to the Tony Stewart Collection. “We don’t publicize it because right now it’s his private space with lots of his prized cars and memorabilia. But it is huge.”

Who’s going to buy this, the most expensive listing in Indiana history? Holle points to the fact that the ranch is a licensed hunting preserve and is even zoned for use as a bed and breakfast, so has multiple-use possibilities.

“Much of the appeal has to be its location. The ranch is only an hour’s drive from Indianapolis International Airport and the Indianapolis Motor Speedway. And while it looks from the photographs to be in the middle of nowhere, there’s a Starbucks five minutes away.”

According to Holle, Stewart is selling because non-stop travel commitments keep him and his new wife, top drag racer, Leah Pruett, from spending enough time there.

Check out more photos of the estate below: