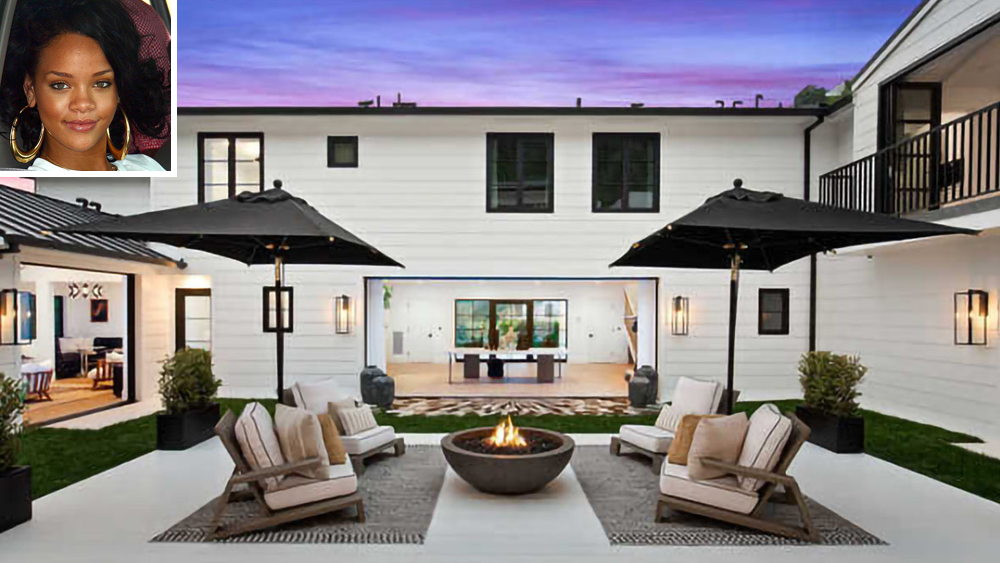 Rihanna apparently caused a big stir by skipping the 2021 Grammy awards, leaving the spotlight to other music superstars like Beyoncé, Billie Eilish and Taylor Swift. Reports said the Barbadian singer’s absence was due to not being nominated—and then there’s the pesky fact that her much-anticipated upcoming album “R9” still has yet to surface, despite being years in the works. Of course, Rihanna’s also been busy with other things, too, like becoming a retail mogul. Sales of the burgeoning cosmetics tycoon’s Fenty Beauty makeup line have gone bonkers, and her Savage x Fenty lingerie brand is now reportedly valued at a whopping $1 billion.

The Grammys skip might also have something to do with the fact that Rihanna recently found residential love in a not-so-hopeless place. The singer has just acquired a new house—a $13.8 million mansion, to be exact—and the property is located on a highly coveted cul-de-sac in the mountains above Beverly Hills. Neighbors include Sir Paul McCartney, and a few doors away lies a sumptuous estate that was leased for several years to Mariah Carey, and was more recently rented by Madonna during the Covid-19 pandemic.

Originally built in the 1930s, the Rihanna estate was formerly owned by Mary Sheldon, the daughter of I Dream of Jeanie creator Sidney Sheldon. In 2016, Sheldon sold the dated house for $4.3 million to entrepreneur and investor Daniel Starr, whose acquisition of the property was chronicled on Bravo’s Million Dollar Listing.

The mansion blends both contemporary and traditional elements.  Alexis Adam

Starr subsequently spent millions to demolish and rebuild nearly every inch of the house (and he would later sue his contractors for those millions, alleging fraud and shoddy workmanship.) Last year, the property was put up for sale, asking $15 million. The transfer to Rihanna appears to have gone down off-market, but the Umbrella empress forked over $13.8 million for the premises, according to tax records.

Invisible from the street behind tall hedges and big gates, the 7,600-square-foot mansion is approached a driveway that slopes up to meet the two-car attached garage. A curved flight of stairs ascends to the house, which sports a crisply contemporary look with white paint paired against a black metal roof and black trim. The mansion features a “sophisticated design” that “blends both contemporary and traditional elements,” per the listing, and the place pays clear homage to the trendy modern farmhouse look, with its French white oak hardwood floors and open floorplan.

A glass front door pivots into the foyer, which is dominated by a giant black bull sculpture—grab life by the horns, if you will—and overlooks the proverbial heart of the property: an open-air central courtyard with an al fresco terrace, pool, spa, and firepit.

Public spaces of note include a fireplace-equipped living room with walls of Fleetwood glass sliders opening to the outdoors, while the luxe wet bar area goes for a more masculine look with its moody splash of dark gray hues. The bar services an intimate family room/lounge/library with another fireplace, plus floor-to-ceiling built-in bookshelves.

The listing describes the kitchen as “stunningly executed.” Indeed, nearly every surface is slathered in marble, and there are not one but two islands, both with brass fixtures. Top-of-the-line stainless appliances service a breakfast banquette that goes way glam with tufted black leather seating.

Upstairs, the master suite looks as though it just stepped out of a Bali resort travel guide, with a five-star bedroom that overlooks Coldwater Canyon, and a custom closet with black lacquer cabinetry. Decked out in a unique, thickly-veined marble, the spa-esque master bath opens to an al fresco lounge area.

The estate offers plenty of privacy for the star.  Alexis Adam

The half-acre property is steeply sloped, so tall retaining walls encircle the house and yard, providing security plus privacy—ideal for a big celebrity.

In case anyone didn’t know, Rihanna is a real estate mogul in the making who owns at least four other multimillion-dollar homes, including a $6.8 million Hollywood Hills estate, a vacation retreat in her native Barbados, and a high-floor condo along LA’s Wilshire Corridor. The 33-year-old’s current main residence, however, is a $5.5 million penthouse in Century City’s coveted The Century skyscraper, where residents have 24/7 concierge and doorman services, plus gym, spa, and in-house restaurant facilities. Some of the high-profile neighbors in that building include Candy Spelling, Matthew Perry, and celeb chef Nobu Matsuhisa.