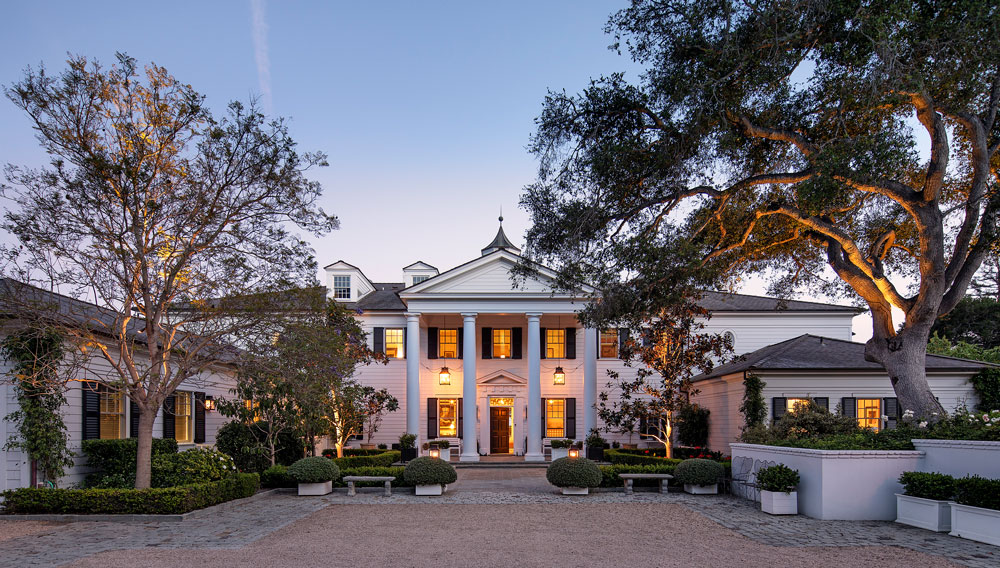 Actor and producer Rob Lowe and his wife, jewelry designer Sheryl Berkoff, are selling their little slice of heaven in Southern California. Their sprawling 3.4-acre colonial-style estate, which overlooks the Pacific Ocean in laid-back Montecito, Calif., is being offered for $47 million.

The Lowes purchased the property in 2005 and teamed up with Santa Barbara architect Don Nulty to create an unpretentious 10,000-square-foot main house. The two-story white abode was inspired by the architecture of rural Virginia where Lowe, known for his roles in hit television series like The West Wing and Parks and Recreation, grew up.

The 20-room main residence shows off a grand columned entrance and a clapboard exterior. In total, there are six bedrooms (each with a fireplace), eight full baths, and three half baths. Interior designer Kyle Irwin and feng shui master David Cho created a free-flowing, open-concept layout characterized by glass windows that showcase the ocean and Santa Ynez Mountains with spacious verandas that overlook the rolling green hills beyond.

Amenities include formal living and dining spaces, a piano bar, a screening room, an expansive wine cellar, and a gym. And, yes, there’s a home office in the property’s west wing that is slightly reminiscent of the one Lowe’s fictional character had as Deputy White House Communications Director in The West Wing.

The manicured grounds boast a cozy two-bedroom guesthouse and an 800-square-foot pool house with a bedroom and full kitchen. Outdoor amenities include a high-hedged tennis court with two observation areas, a swimming pool, a reflecting pond, a koi pond, and an outdoor custom kitchen with a wood-burning pizza oven.

And if by chance you have the misfortune of running out of pizza-making ingredients, the community has the likes of Oprah Winfrey, Jeff Bridges, and Ellen DeGeneres (who is also selling a Montecito estate) as neighbors to come to the rescue.