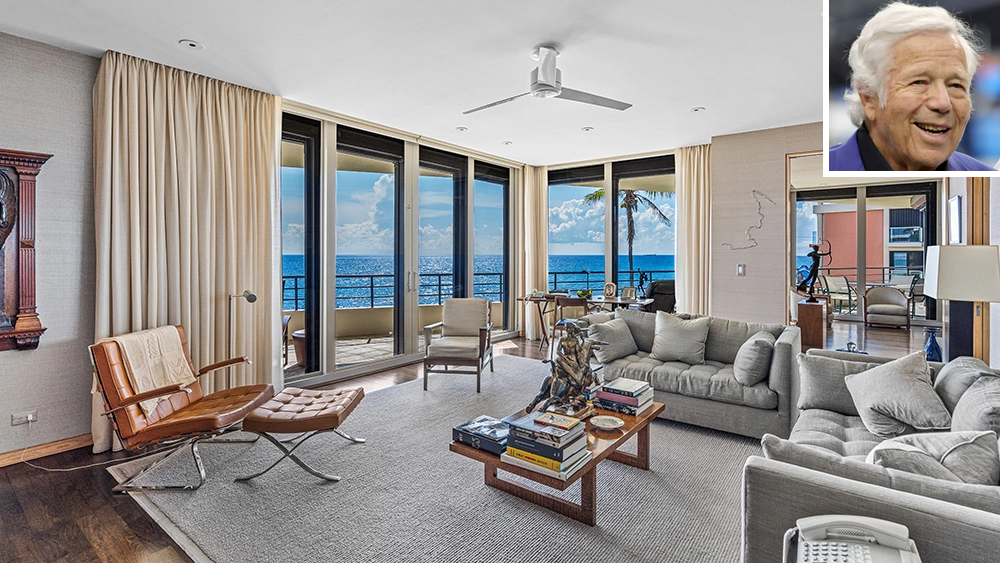 When Robert Kraft bought the New England Patriots for $172 million nearly three decades ago, he set a league record. Now, the billionaire owner has made history yet again—this time in the real estate realm—with the purchase of a new penthouse in Palm Beach.

Kraft recently dropped a whopping $23.7 million on an oceanfront condo in South Florida, making it the priciest pad to ever sell in the ritzy island enclave, according to the Wall Street Journal. For context, that’s about $3 million less than the original asking price when it was first listed in September. The swanky seaside digs span roughly 5,000 square feet and comprise four bedrooms, five-and-a-half baths, plus a 1,300-square-foot wraparound terrace.

Prior to Kraft acquiring the abode, the apartment belonged to oil tycoon Erving Wolf and his wife, Joyce. The couple bought the condo back in 2000 for a modest $6 million, one of only a few penthouses sited directly on the beach. Before Erving passed away in 2018, and Joyce in 2022, they tapped their daughter-in-law, renowned American architect and sculptor Maya Lin, to renovate the home. Lin, whose best known for designing Washington’s Vietnam Veterans Memorial, gave the residence a modern and contemporary refresh. Most notably, she added natural wood, stone and limestone to mirror the color of the ocean.

“The apartment when we first saw it had potentially wonderful views to the water but was partitioned off by a more traditional separation of formal rooms,” Lin told the WSJ in September. Inside, you’ll find soaring floor-to-ceiling windows, walnut floors and large glass doors that lend a bright and airy feel to the open layout. Elsewhere, there’s a library, dining room, kitchen and a large living area. Considering the couple were avid art collectors, the foyer, which serves as a mini gallery, is where Kraft can now freely hang his own blue-chip works—or, of course, showcase his six Super Bowl trophies.

Click here to see all the photos of Robert Kraft’s Palm Beach penthouse.