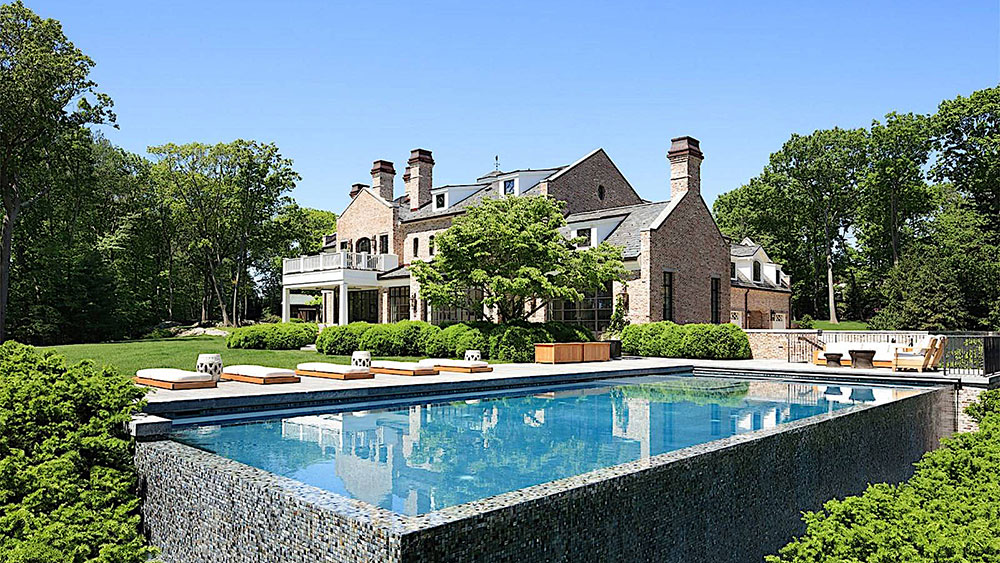 Though he just signed a two-year contract extension with the New England Patriots, 42-year-old star quarterback Tom Brady is on the move. He and his supermodel wife, Gisele Bündchen, have just put their Massachusetts estate on the market for $39.5 million.

The custom-built, five-bedroom, 9,716-square-foot home sits on five lush acres next to the ninth tee and fairway of Brookline’s The Country Club. Opened back in 1882, it’s North America’s oldest, continually-operating golf club.

The estate, five miles from the center of Boston, is also right next door to Patriots team owner and fellow golfer, Robert Kraft, and across the fairway from the 26,000-square-foot mansion owned by Reebok founder, Paul Fireman.

The Bradys purchased the home site back in 2013 and commissioned acclaimed architect Richard Landry to design the brick and slate-roofed manse. Using designer Joan Behnke & Associates for the interior, the home was completed in 2015.

An impressive brick-paver circular driveway—big enough to park at least 20 of his teammates’ cars—leads to the home’s low-key entry foyer. On the first floor, there’s a formal living room and dining room, a cozy family room with soaring ceilings and exposed wood beams, and an elegant office with fireplace.

As you’d expect from a family well-known for eating healthy with a strict plant-based diet, the home features an expansive, eat-in kitchen with professional-grade appliances.

On the second floor are five bedrooms, including a huge master suite, while on the lower level there’s a recreation room, play room for the couple’s two kids, a wine cellar, large gym and spa.

The grounds also feature a large infinity-edged swimming pool, a stone carport and an expansive organic herb and vegetable garden.

Fans of the Bradys might be familiar with the home as it appeared regularly on Tom Brady’s Facebook Watch docuseries Tom vs. Time, as well as Bündchen’s “73 Questions” video for Vogue magazine.

Where will the Brady bunch move to next? Sleuths at the New York Post recently reported the couple have been spotted house-hunting in both Greenwich, Conn. and Alpine, N.J., but so far, not anywhere near Boston or the Patriots’ stadium in Foxboro, Mass.

Of course, they can always stay at their $25.5 million, 12th-floor condo at the imposing, Robert A.M.Stern–designed 70 Vestry Street building alongside the Hudson River in New York’s Tribeca neighborhood.

If they get anywhere close to their asking price, it would deliver a double-windfall for the power couple; the home went on the market just days after Brady signed his extension with the Patriots, which could be worth up to $70 million.

Getting full asking, however, could well be a challenge. That 25,000-square-feet neighboring mansion owned by Reebok founder, Paul Fireman? First listed back in 2016 for a staggering $90 million, the 14-acre estate, known as Woodland Manor, then saw a price cut to $69 million earlier this year.

Now it’s on the market for just $38 million, albeit with seven rather than its entire 14 acres. A relative bargain compared to the much smaller Chateau Brady.