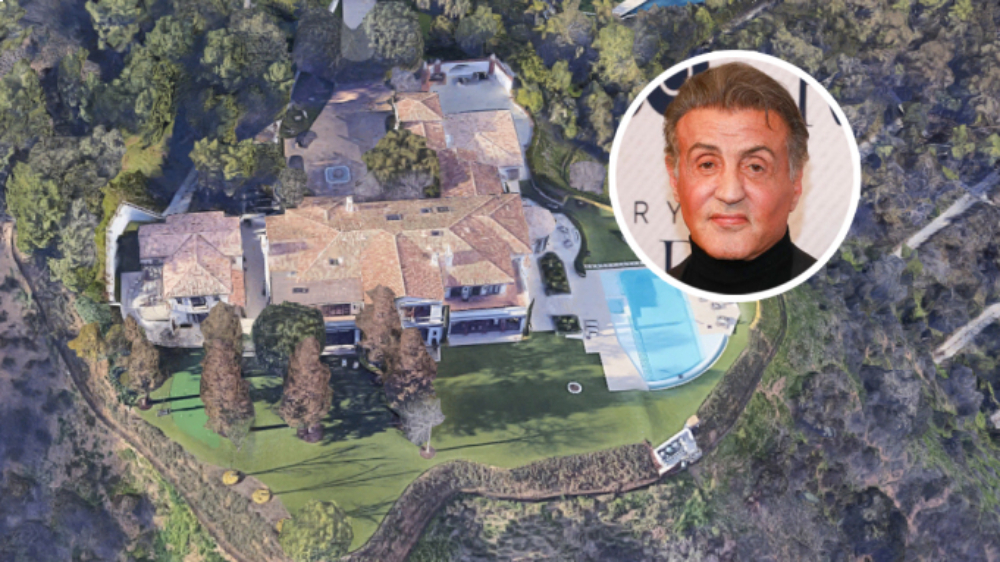 Platinum Triangle mega-agent Ben Bacal, founder of Revel Real Estate and creator of the Rila real estate app, has not-so-quietly announced, and in the most modern of ways, via Instagram, that Sylvester Stallone seeks a staggering $130 million for his longtime mansion in the famously steroidal Beverly Park enclave in the mansion strewn mountains above Beverly Hills.

The thrice Oscar nominated and still remarkably pumped “Rocky” and “Creed” star, now in his mid-70s, purchased the slightly shy of 3.50-acre spread in the late 1990s for an unrecorded amount and soon custom built a stately pan-Mediterranean mansion that measures in around 21,000 square feet and carries a horse-choking annual tax bill in excess of $125,000.

The 8-bedroom and 12-bath manse includes a voluminous library/office under a barrel-vaulted ceiling where miles of lighted shelves showcase an almost strangely vast trove of “Rocky” memorabilia. There’s even a life-size statue of Stallone as Rocky with his be-gloved hands raised in victory standing in front of an arched window that looks out on the estate’s vast motor court. The kitchen appears newly updated with not just one but two islands, the dining room’s walls are hand-painted in a manner that evokes an Old World castle, and a roomy den with wet bar let’s the outdoors in thanks to a full wall of floor-to-ceiling windows.

Set down a long gated drive on a private promontory next door to the longtime mansion of late media tycoon Sumner Redstone, the plush estate’s main residence is complemented by a detached two-story guesthouse and an extensive service wing. Deep loggias and second floor terraces offer spectacular canyon and city lights views, the tree-dotted expanse of flat lawn incorporates a putting green and pale stone terraces provide ample room for alfresco entertaining and sunbathing around the crystalline swimming pool and spa.

A view of the home’s expansive kitchen.  Rila

Given that the highest price ever paid for a home in Beverly Park is $40 million, Stallone’s asking price seems exceedingly aggressive. Still, as gutsy as the by-any-standard astronomical $130 million asking price may be, it is not, by far, the most expensive property currently available in Beverly Park. That dizzying crown goes to Villa Firenze, aviation leasing billionaire Steven Udvar-Hazy’s palatial estate of nearly 30,000 square feet that is saddled with a $160 million price tag after it was first set out for sale in 2018 at $165 million.

Along with an assortment of international business tycoons, fortunately born heirs to vast family fortunes and even a Saudi royal or two, some of the many high-profile residents of Beverly Park include Denzel Washington, Justin Bieber and Hailey Baldwin, Paul Reiser, Eddie Murphy, Rod Stewart, Magic Johnson and Mark Wahlberg. Former residents include Reba McEntire, a couple of Real Housewives and fashion model turned fashion mogul Kimora Lee Simmons who quietly sold her big spread late last year for $15.7 million, a big number by most standards but more than $9 million less than the $25 million she and her legally and financially beleaguered former Goldman Sachs banker husband Tim Leissner paid for the place about 3.5 years earlier.

It’s not too much of a surprise that Stallone and wife Jennifer Flavin are looking to cash in on the sale of their West Coast residence as late last year they plunked down $35.4 million for a Bermuda-style waterfront estate in Palm Beach, Florida. With about 1.5 acres of lushly landscaped grounds, the estate offers seven bedrooms and a dozen bathrooms across its main house and two guesthouses. See more photos of the home below: