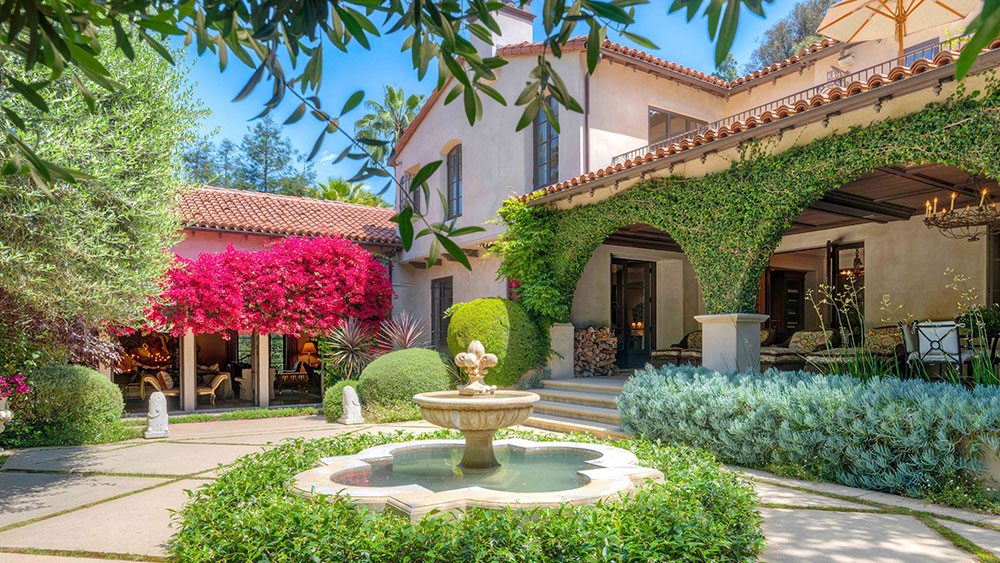 The former Hollywood haunt of horror-movie legend Vincent Price—his credits include such fright-fests as Theatre of Blood, The Pit and the Pendulum and The Fly—has just arisen on the market for a blood-curdling $21 million.

The actor owned the home in the 1960s during the height of his career when he delivered some of his most memorably menacing performances. If you don’t remember him from his

role as The Abominable Dr. Phibes, you’ll know him for his deep voice and raucous laugh in Michael Jackson’s Thriller video.

The current owner is billionaire Peter Sperling, son of the founder of the University of Phoenix. Sperling purchased the estate for $14.95 million in 2004 and, over the years, has carefully and sympathetically restored the property.

One of its standout features is the elegant, big-screen home movie theater. Yet it’s what’s hidden away that will have movie buffs salivating; behind a secret door is the original “Bel-Air Circuit” projection room.

Back in the glory days of Hollywood, movie moguls and A-list actors like Price were allowed to receive new films on the weekend they opened. They were delivered to the home, typically with a security guard and studio projectionist, for a showing.

As, at the time, most of the Hollywood movie elite lived in the Bel-Air neighborhood, the recipients were known to be on the “Bel-Air Circuit.”

As for the home itself, you enter through stately wooden gates and up a long drive to a motor court and covered, two-car porte-cochere.

The stunning entrance is pure Hollywood. You step through towering sculpted metal doors set in intricate, carved stonework and into a two-story timbered cathedral lobby. Look up and you’ll see an imposing metal chandelier that could have been a prop from one of Price’s horror blockbusters.

The vast, grand ballroom-style main room boasts wooden beamed ceilings, an imposing fireplace, a Juliet balcony and doors leading out on to an elegant covered terrace.

To entertain guests, the main house features a billiards room, an artist’s studio, bar and library, while outside there’s a pool with cabana, a full basketball court, and tennis court with viewing pavilion. On the grounds there’s also a one-bedroom guesthouse with kitchen.

“This is one of the Westside’s most distinguished and timeless estates; a residence of exceptional privacy and incomparable restored integrity,” says Timothy Di Prizito, listing agent with Coldwell Banker Global Luxury Property Specialists.

Di Prizito shares the listing with colleague Joyce Rey at Coldwell Banker’s Beverly Hills South office. Naturally the estate is available for viewings only after dark.

The grounds out back.  Photo: Courtesy of Nate Cook/Coldwell Banker