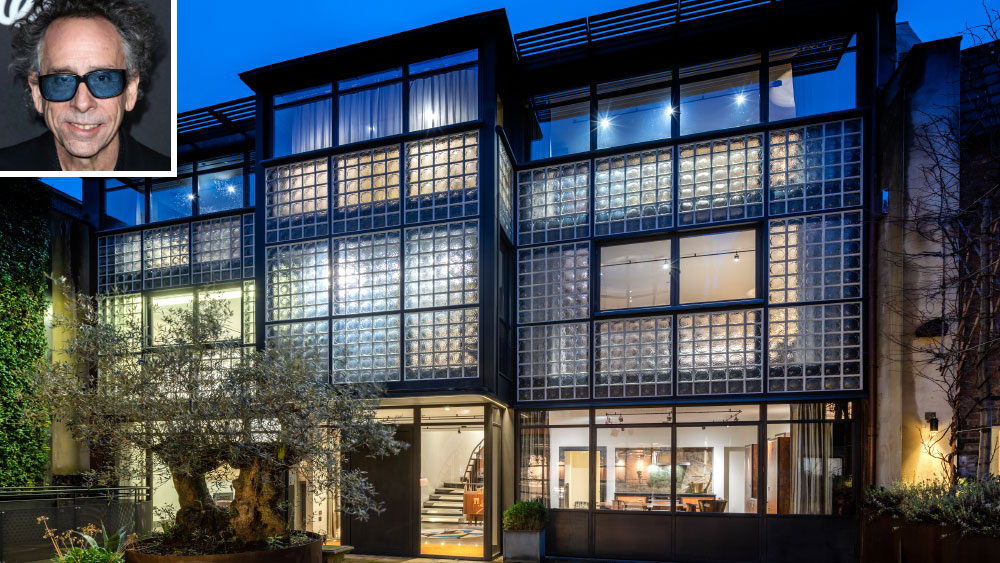 Sitting on the former site of a landmark recording studio, where the likes of David Bowie, Tina Turner and Pink Floyd made hits, this cavernous 13,154-square-foot live/work space is like a shimmering Art Deco glass jewelry box that’s been dropped into a sleepy, slightly gritty London back alley.

Made up of two separate buildings linked by a subterranean level that has its own swimming pool and cinema, this cavernous, four-story, five-bedroom is nothing less than a modern masterpiece.

The home’s architectural significance comes from its glass-block facades, inspired by the iconic “Maison de Verre” (house of glass) in Paris. Built in 1932 by the architect Pierre Chareau, the maison is still considered a blueprint for today’s work-at-home thinking.

Which is reportedly what attracted Burton to Eglon House in 2016, just months after the home’s completion. The director had been commissioned by Disney to create a live-action remake of the animated classic Dumbo, starring Danny DeVito, Colin Farrell and Eva Green.

Seems he used the home’s west wing as his film studio and personal living space, and the east wing to provide accommodations for his creative team. If there looks to be an over-abundance of closet space and dressing areas, this is why.

Burton rented the residence until the film’s completion in 2019, which is when he transferred to a rambling north London mansion he bought, for $14 million, from Shirley Valentine actor Tom Conti.

Anyone looking for a glamorous, elegant location for a London town home likely won’t find it with Eglon House. Rustic, nondescript metal gates off Primrose Hill’s Berkley Road open on to the slightly unkempt, cobbled cul-de-sac that’s Eglon Mews, and that sounds like just the sort of thing Burton might seek out.

Originally used to provide horse stables for the once grander homes on surrounding streets, the Mews is currently a mishmash of 10 or so, now-pricey, two-story Victorian row homes.

The subterranean space connects both wings of the house.  Photo: Tony Murray Photography

Over the years, the buildings on the current site of Eglon House housed a shell-casing factory during the First World War, then a milk dairy, and more recently, the world-renowned Mayfair Recording Studios.

Development of the site began in the late 1990s with leading London architects Chassay Last and design house Russell Sage Studios called in to create the property.

A stone-tiled courtyard separates the two buildings and provides coveted off-street parking for a couple of cars—alas, even $27 million won’t buy you a garage to keep your Range Rover dry.

A stairway off the courtyard leads down into that vast, subterranean space with its 40-by-23-foot family room, a bar, sauna and steam room.

Arguably the area’s piece de resistance is its swimming pool; at the touch of a button, the entire pool floor raises up to create a multi-use space. With a 10-foot wide LED screen nearby—naturally it’s waterproof—bring in a few sofas and it makes a perfect movie screening room.

Take the winding staircase, or elevator, up to the first floor and in the west building lies the kitchen/breakfast space and dining room. Over on the east wing, you’ll fined a living room and garden room.

The second floor comprises the huge, 2,000-square-foot primary suite on the west side, a bedroom and study to the east. The top floor on the west side is home to yet another expansive live/work area with its own outdoor terrace, and two more bedrooms eastside.

Before Burton, 62, started his three-year rental, seems the developer/owner—he’s remaining anonymous—listed the property in late 2015 for £24m, or almost $30 million. With no takers, it was offered for rent at $161,000 a month.

“Eglon House is a unique home without parallel in London,” says Mark Pollack, cofounding director with Aston Chase. “It is one of a kind, and represents a perfect opportunity for a discerning purchaser who values privacy and the ability to have flexible living/work accommodation.”

The home makes the most of its terraces.  Photo: Tony Murray Photography

The residence was once a shell-casing armory.  Photo: Tony Murray Photography