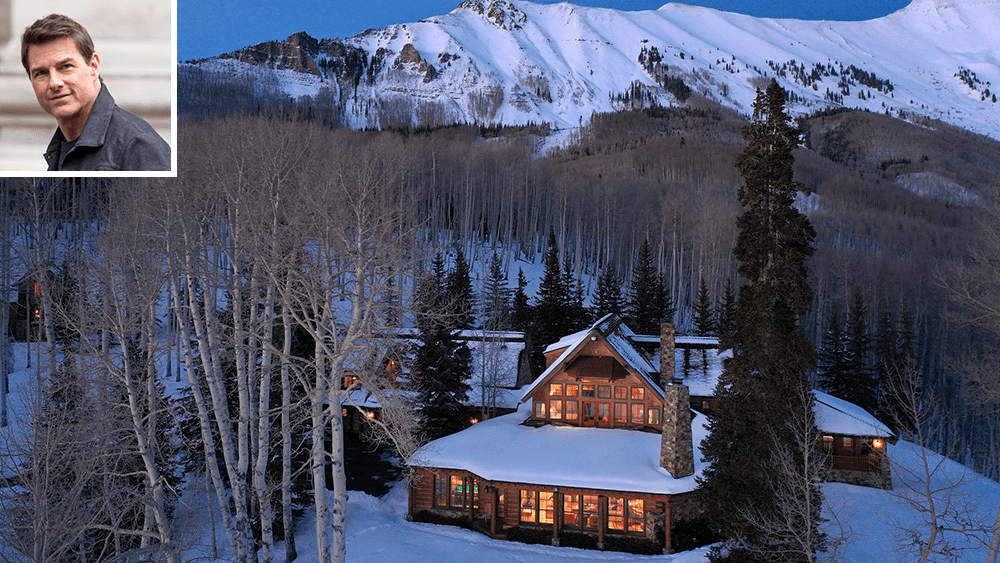 Tom Cruise would like you to show him the money—$39.5 million, to be precise—before taking a tour of his spectacular 320-acre mountain-top Telluride lodge that the Jerry Maguire star has just listed.

Finding a buyer for the sprawling compound has proved to be something of a mission impossible for Cruise, 58. He reportedly first privately listed the home back in 2014 for an eye-watering $59 million. With no takers, it quietly came off the market two years later.

Now with the property market in this chic Colorado ski resort on fire, and the actor reportedly rarely visiting, he’s shaved the price by $20 million and listed it with LIV Sotheby’s International Realty in Telluride. Agents Eric Lavey  and Dan Dockray hold the listing.

“It’s hard to express just how spectacular this property is,” Dockray tells Robb Report. “It offers the most breathtaking, awe-inspiring views you’ll ever see. It is so private and secluded, yet just minutes from the town of Telluride.”

If the cedar-clad, 10,000-square-foot main lodge looks vaguely familiar, it’s where Cruise famously sat down for a tell-all interview with Oprah Winfrey in 2008. You can still find it on YouTube.

As Oprah says as she walks up to the house, gazing at the jagged peaks in the background: “I have never seen anything like this in my life. I swear I want to weep, it’s so beautiful.”

No doubt inspired by the visit, seven years later Oprah paid $14 million for a five-bedroom Telluride cabin just down the mountain from the property, plus $10 million for a prime piece of land nearby that she’s currently developing.

The kitchen has a wall of fridges.  Courtesy Joshua Johnson for LIV Sotheby’s International Realty

Surrounded on three sides by national forest land, the Cruise home was, according to the listing, custom-built with privacy in mind. The secluded estate is accessed by a secure, gated entry and a snaking, mile-long driveway through groves of towering aspens.

Despite its seclusion—the main house sits on an escarpment with panoramic views of the 13,000-foot-high, snow-capped Campbell Peak behind it—it’s only a 10-minute drive from downtown Telluride with its funky shops, restaurants and ski runs.

Cruise reportedly bought the first parcel of land in 1992 and spent the next two years working on the home’s design and overseeing the construction. It was completed in 1994. Yet, according to Dockray, it wasn’t until 2002 that the actor acquired all the land now included in the estate—five parcels in total—that make up the 320 acres.

Clad in bleached cedar timber and native stone, the two-story main house has as its centerpiece a magical living room with a huge stone fireplace, exposed rough-hewn beams and wrap-around windows showcasing those million-dollar views.

Close by is the family kitchen with industrial-grade appliances, a trio of fridges and a vast central island with twin sinks. Wooden steps lead up to a rustic dining room with stunning oversized, dove-tailed, timber-planked walls.

A cozy den for movie watching—the new owner will definitely need a bigger TV —features overstuffed sofas and is lined with rustic bookshelves. Other spaces include a billiards room, library and gym. Upstairs are four ensuite bedrooms, and when guests stop by, the home has a stand-alone,1,700-square-foot, three-bedroom guest house.

Befitting an action-hero owner, the estate has been designed for outdoor fun. There are dirt bike and all-terrain vehicle trails and snowmobile tracks, along with a labyrinth of hiking and snow-shoeing paths.

For aircraft-loving Cruise—his upcoming Top Gun: Maverick is set for a July 2 release—the home has added appeal in that its decks are high enough to be able to look down on the private jets flying in and out of Telluride airport. Naturally the estate has its own helipad.

In recent years, Cruise is believed to have off-loaded many of his trophy properties in Beverly Hills, New York and England to focus on a penthouse in Clearwater, Fla. Close to the headquarters of Scientology, where the actor is a devout follower, the condo is part of a building designed by Mexican property developer and major Scientology donor Moises Agami.

The penthouse takes up the ninth and tenth floors of The SkyView tower and is said to feature a 39-foot rooftop infinity pool, a private car elevator and a passageway leading to a smaller condo with a flight simulator, office and gym.