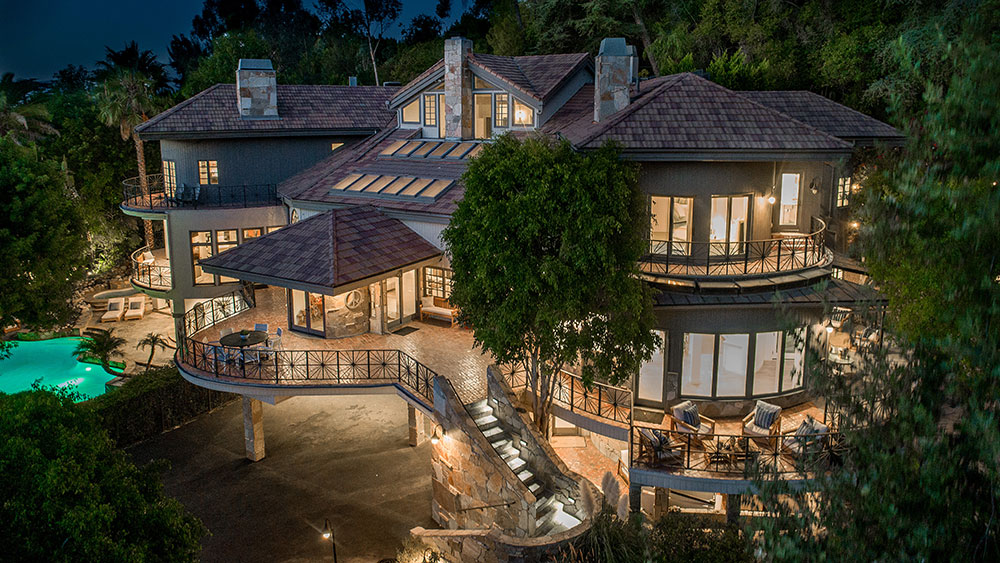 Just like its rockstar owner, Tom Petty’s former home in Encino, Calif. lived a rockstar life. Over the years it got burned, went through bankruptcy, a divorce, foreclosure and got raided by a SWAT team.

Today, however, this sprawling estate, an hour’s drive from downtown LA, with its three-story, 11,500-square-foot main house, is all newly-restored and on the market for a surprisingly reasonable $4.995 million.

Petty, who died in October 2017 at age 66, built the original home back in the mid-1980s at the height of his success as a solo artist and with his band, The Heartbreakers.

That first house was almost completely destroyed in 1987 when an unknown arsonist set fire to an outside wooden staircase. The fire destroyed everything apart from the basement that Petty used as a recording studio.

The musician rebuilt the home in the style of a mountain lodge and moved back in two years later with his family.

When Petty and his first wife Jane Benyo divorced in 1996 after 22 years of marriage, Benyo got the house in the settlement. In 2013 she listed it for $3.58 million, but after it failed to sell she declared bankruptcy and the bank foreclosed on the home.

During this time, it seems the empty house was rented out to a party planner who held a number of raucous parties, which didn’t go down well with the neighbors. When the party-hard tenant refused to move out, a SWAT team was called in to repossess the home.

Property records show that in 2017 the estate was eventually sold by the bank for $2.575 million to movie-director-cum-house flipper Jenna Mattison and her partner Donald Woolhouse. They spent 11 months completely transforming the estate, changing the color schemes, replacing the leopard skin carpets, and ditching the neon-blue tiling.

The final stage in the home’s rich history came toward the end of last year when the newly-renovated home was listed for $4.995 million, and snapped-up by Grammy-winning record producer Randy Spendlove for $4.485 million.

Sadly Spendlove, who is president of Motion Picture Music at Paramount Pictures, has now had a change of plans and decided to sell. He’s jointly re-listed the iconic estate for $4.995 million with Craig Knizek of the Agency, and Jade and Tiffany Wade, of Coldwell Banker Residential.

As to the estate itself, it sits on nearly an acre in Encino’s exclusive Rancho enclave and is reached via a long, tree-lined driveway.

The house has six bedrooms and 10 bathrooms over three levels. Standout features include a huge great room with a soaring stone fireplace and a spectacular winding staircase. The room is flooded with light from the 12 skylights set into the driftwood-beamed ceiling.

One of the master suites.  Photo: Adam Latham

One of the coolest rooms in the home is the new movie screening room with its sunken section that was originally a “theater in the round” where Petty and his pals would jam. In keeping with the theme, the home is staged with a wall of guitars and a gold-colored Gretsch drum kit in a brick-walled recess.

Of the six bedrooms, two are master suites with the main-level master featuring two huge walk-in closets and dual spa-like bathrooms. Two of the guest bedrooms come with kids’ sleeping lofts set into the vaulted ceilings.

To keep the Tom Petty heritage alive in the house, there’s a lower-level room dedicated to a music studio, with a recording booth, racks for guitars and an electric piano.

Outside, the tree-lined gardens include a cascading waterfall that flows into the stone-edged pool and spa. There’s also a new outdoor cabana bar, fire pit and shaded areas for al fresco dining.

During his remarkable career, which included a stint with the supergroup, Traveling Wilburys, Tom Petty sold over 80 million records worldwide, including such hits as I Won’t Back Down, Free Fallin,’ American Girl and Into the Great Wide Open. He was inducted into the Rock and Roll Hall of Fame in 2002.