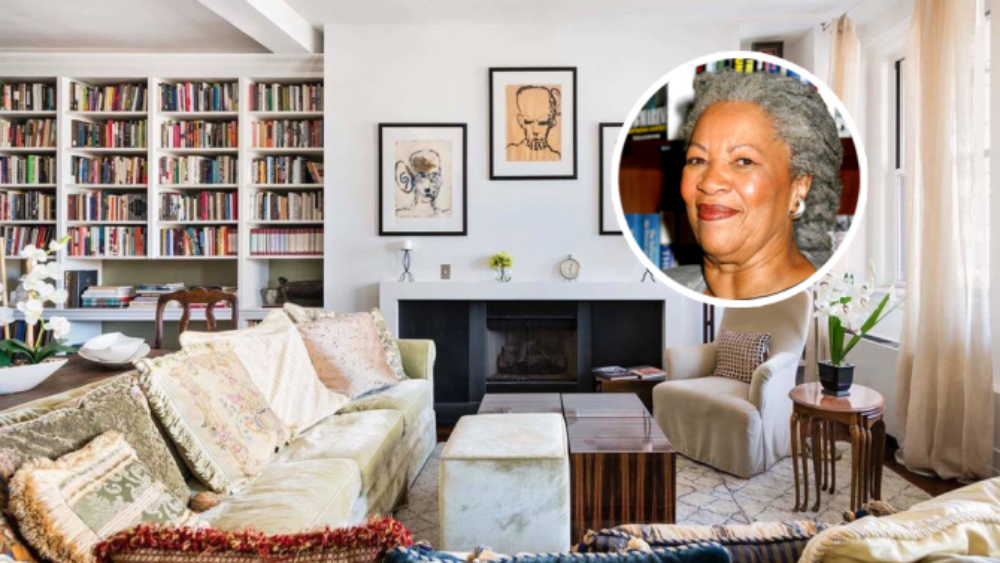 Not all artists and/or intellectuals are starving. Case in point is the lower Manhattan loft of late literary lion Toni Morrison that’s come for sale just over a year after her passing, in August 2019 at 88, with an asking price of $4.75 million. The Nobel Prize winning writer and university professor, whose Pulitzer Prize winning 1987 novel “Beloved” was adapted into a 1998 film of the same name starring Oprah Winfrey, purchased the slightly more than 2,300-square-foot tenth-floor spread, according to tax records, in the early days of 2014 for $3.8 million.

The loft’s clean-lined and carefully unadorned architecture is softened with gently worn antiques, plush upholstered sofas, an eclectic smattering of artworks and, of course, books, lots and lots of books. The comfortably commodious main living space stretches forty feet from end to end. Just off the main entrance, the kitchen anchors one end of the space, while the other end has a simply designed fireplace as its focal point. The convivial center of the room holds a trestle-style dining table and book-filled bookshelves extend from floor to ceiling. One of the two guest bedrooms was opened up to the living room, and served as Morrison’s library and writing room, while the primary bedroom offers open city views to the north and east, plus a spacious walk-in closet/dressing area and a bathroom with both a deep soaking tub and a glass enclosed shower.

A glimpse into the home’s airy bedroom.  Brown Harris Stevens

Built at the turn of the 20th century and known as the Textile Building, the grandiosely embellished Neo-classical building was originally designed as a commercial structure by architect Henry Janeway Hardenbergh, whose other more legendary handiwork includes the Plaza Hotel and the The Dakota apartment house. Restored and refurbished by architects Karl Fischer and Alan Ritchie, and converted to residences in 2001, the full-service, pet-friendly boutique building offers residents a 24-hour attended lobby, a package room with cold storage for grocery deliveries, a fitness center, a library/media room with full kitchen and wet bar, and a 5,000-square-foot landscaped roof terrace. Of course, residents pay dearly for the plethora of premium services; Morrison’s unit carries monthly maintenance charges of $2,350, plus another $2,500-or-so per month in property taxes, according to listings held by Brown Harris Stevens agents Amanda S. Brainerd, Simone Mailman and Gerard Ryan.

Morrison, who once kept a historic Colonial-style home in Princeton, N.J., where at the time of her passing she served as the Robert F. Goheen Professor in the Humanities, Emeritus, at Princeton University, previously owned a duplex apartment at the renowned Police Building on the frenetic border between Soho and Chinatown. Tax records show the “Song of Solomon” author sold the top-floor one-bedroom and 1.5-bath aerie in 2012 to businessman Dane Neller who combined it with a neighboring unit before he flipped the whole kit-and-kaboodle in 2013 for $4.3 million.

Morrison’s real estate legacy is, however, not so much tied to lower Manhattan or Princeton as it is to a tiny sliver of a community known as Grand View-on-Hudson, about 25 miles north of Manhattan, where in the late 1970s Morrison bought a converted boathouse along the banks of the Hudson River for $120,000. In 1993, a fire destroyed a significant amount of the house and prompted a rebuild of the historic property that now includes a private dock. Tax records indicate the property was transferred to Morrison’s elder son in the months after her death.

See more photos of the apartment below: