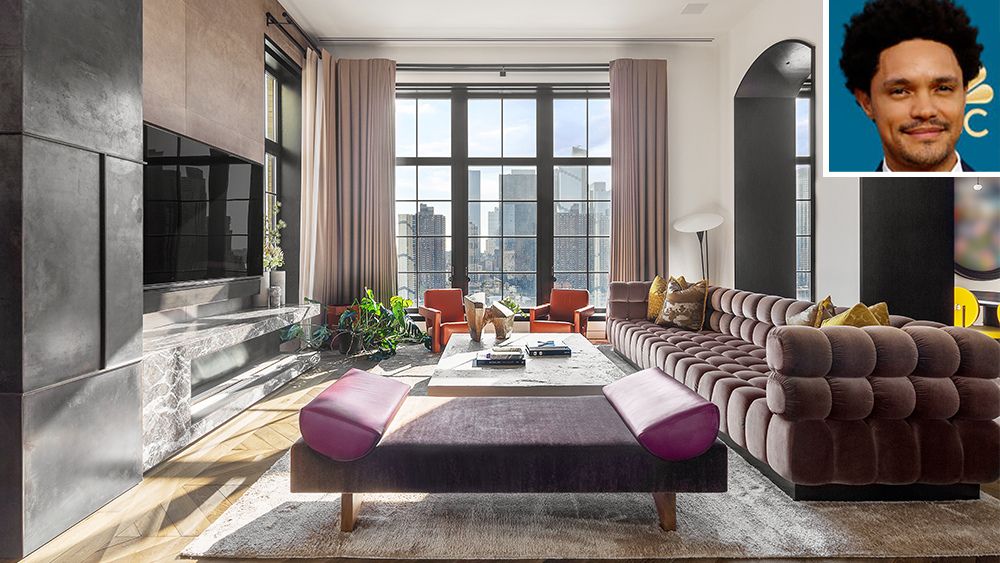 Just last month, Trevor Noah announced that he was stepping down as host of The Daily Show after seven years. Now, as the comedian prepares for his departure on December 8, it looks like he’ll be parting ways with his New York City penthouse as well.

The 3,596-square-foot Hell’s Kitchen condo was extensively renovated during Noah’s ownership and is now listed for a cool $12.95 million with Nick Gavin of Compass. The three-bedroom, three-and-a-half-bathroom duplex is located within Manhattan’s century-old Stella Tower. Formerly known as the New York Telephone Building, it was originally designed by architect Ralph Walker in 1927 and in 2014, reimagined as a luxury residence.

The late-night talk show host’s former digs occupy the 17th and 18th floors and showcase cast metal archways, French doors, oak flooring and marble accents that make the abode feel ultra-modern. Even the walls are stylish, finished with suede leather and plaster. The home itself is bright and airy thanks to soaring 15-foot-tall ceilings and large floor-to-ceiling glass windows.

Off the entry, you’ll find a floating staircase that leads to the upper floor which holds all the common spaces. There’s a dining room with seating for up to 12 guests, and in the chef’s kitchen, room for four more, plus marble slab countertops, top-of-the-line appliances, a wine fridge and pantry. A contemporary living room adjoins both spaces, complete with a gas-powered marble fireplace.

Elsewhere, a pair of double French doors in the sunroom opens to the sprawling 1,000-square-foot private terrace—a standout feature, no doubt. The alfresco space has been outfitted with a custom teak pergola, a heated plunge pool with built-in speakers and a black granite wet bar.

The lower level holds all three bedrooms, one of which is currently set up as a swanky home theater with four leather recliners and wool-upholstered walls. The primary suite offers its own private foyer, a hand-rubbed cortina leather wall and dual dressing rooms. In the principal bathroom, you’ll find a steam shower, soaking tub, heated limestone floors and marble vanities.

While there’s no word on whether Noah will return to TV (or stay in New York, for that matter), he told his audience that in the meantime, he wants to “carry on exploring.”

Click here to see all the photos of Trevor Noah’s NYC penthouse.