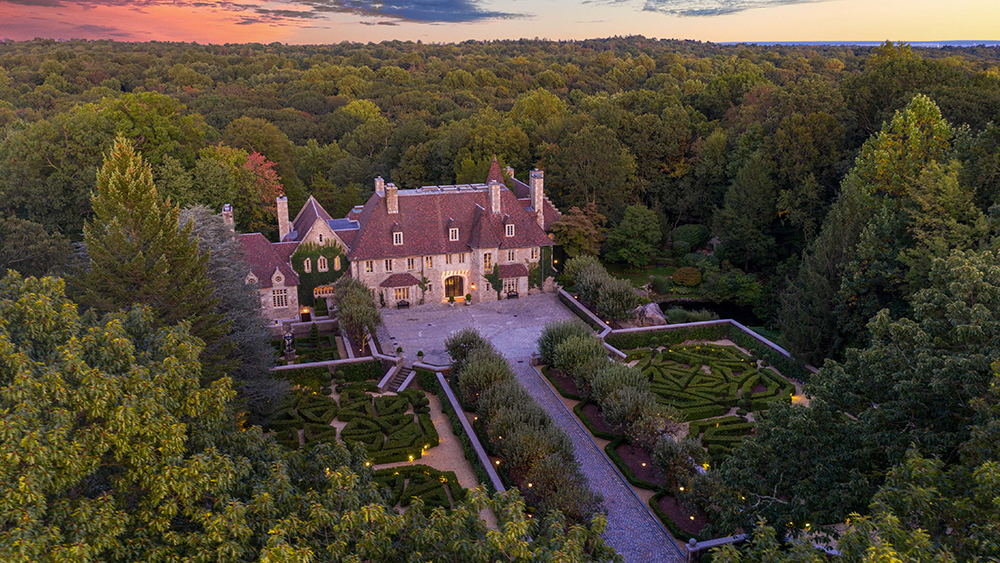 Last listed for $26.6 million, the spectacular 13-bedroom Greenwich mansion goes under the virtual hammer next month.

The lovingly restored French chateau-like estate owned by the late fashion designer Vince Camuto—he cofounded shoe brand Nine West and sold it in 1999 for $900 million—is being auctioned off at no reserve.

Built in 1927, the 16,300-square-foot Chateau Ridge in Greenwich’s tony Round Hill enclave will be sold through a Concierge Auctions no-reserve online sale. Bidding kicks off Wednesday August 12 and ends Saturday August 15.

Camuto and his wife Louise rescued the dilapidated manor in 1984 and proceeded to lavish a small fortune on its restoration. They commissioned builder-to-the-stars Jimmy Xhema—last year he restored Tommy and Dee Hilfiger’s 1939 Greenwich mansion—to do the work.

The result was nothing less than spectacular. Highlights include a beamed Great Hall that stretches 91 feet, and the so-called Constellation Room that features a 40-foot-high domed ceiling with fiber-optic stars to replicate the night sky on Camuto’s birth date, June 4, 1936.

Avid collectors, the Camutos filled the place to overflowing with an array of 17th and 18th century European treasures.

Take the master suite—the listing describes it as a “master sanctuary”— which features an oval sitting room and private study lined with the work of 17th-century English master-carver Grinling Gibbons. For the dressing room there’s a jaw-dropping hall of mirrors with miles of ornate gold-leaf plasterwork.

On the manicured grounds—the estate covers 4.66 acres—there’s a two-story stone tennis house alongside the Har-Tru clay court. The magnificent sunken swimming pool with its arched columns features a poolhouse, grotto and spa. Close by, there’s a luxurious two-bedroom guest house, and five detached garages with space for seven cars. The list of highlights is seemingly endless.

The house was built in 1927.  Photo: Courtesy of Concierge Auctions

The main house itself looks like it was plucked straight out of 17th century French Renaissance Normandy, with its steeply-pitched roofs, stone facing, mullioned windows and towering chimneys.

Camuto died in January 2015 at the age of 78, and the estate is being sold by his wife and business partner, Louise, who acted as creative director of the Camuto Group. In 2014 the group had an estimated worth of $1 billion. It was sold in 2018 to footwear chain DSW.

The starry domed ceiling of the sitting room.  Photo: Courtesy of Concierge Auctions

Following Camuto’s death, his wife was tasked with selling the couple’s other project, the sprawling 15-acre, 20,000-square-foot Hamptons waterfront estate called Villa Maria. Like Chateau Ridge, it was bought in a dilapidated state and meticulously restored by the couple.

After being first listed in 2008 for a staggering $100 million, Villa Maria  languished for a decade unsold, eventually selling for $49 million two years ago.

One of the dining rooms.  Photo: Courtesy of Concierge Auctions

As for Chateau Ridge, Swedish-born Louise Camuto—she was a former Miss Sweden—describes the massive home as “cozy and welcoming.”

“I think this house is extraordinary. No one is not going to find another house like that has the same quality of craftsmanship,” she says. “It is so beautifully made. It’s a house that makes you feel welcome and warm.”

The grand hallway with its carved ceilings.  Photo: Courtesy of Concierge Auctions

What price it ends up selling for is anyone’s guess. All we know is that according to Zillow, the estate first listed for $25 million in July 2017 and was reduced to $18 million two years ago. It was eventually taken off the market in November last year and, perhaps with an auction in mind, returned this past May with that elevated $26.5 million asking.

The auction itself is being held on ConciergeAuctions.com in cooperation with Shelly Tretter Lynch and Kimberly Johnson of Compass Real Estate who held the original listing. Click here if you fancy waving that digital paddle.