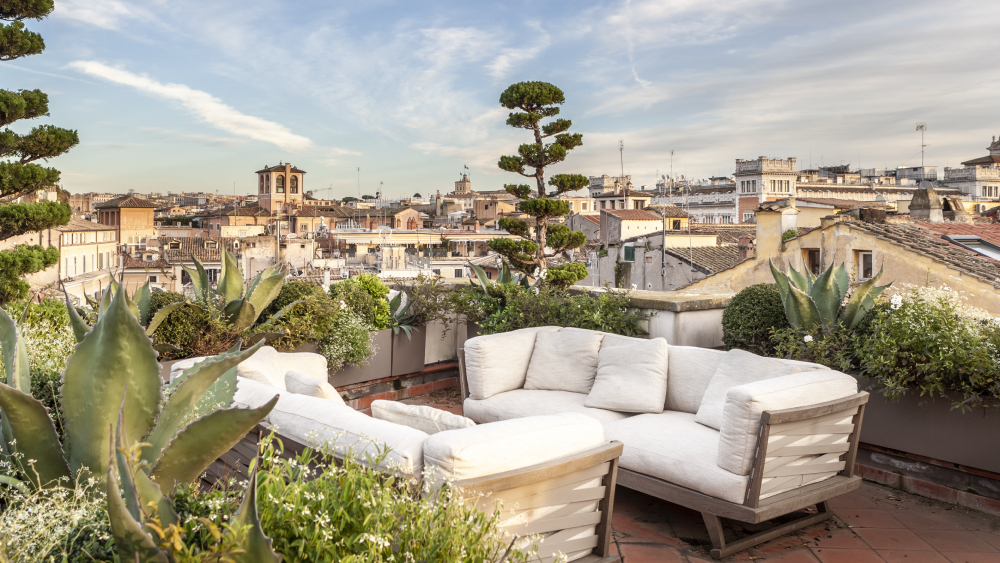 If Rome ever had a royal lineage, the Borgheses were it. The family arrived in the city in the 1500s, quickly rising to power, with Camillo Borghese being tapped to become Pope Paul V in 1605. From there, the noble family’s influence only grew, producing cardinals, princes and dukes, some of whom were among the largest landowners in the region. They built the Palazzo Borghese and Villa Borghese, and you can visit the villa today; it holds the family’s collection of fine art. As for the current Borgheses, the winds of fortune shift. The most well-known might be Lorenzo, who starred in the ninth season of The Bachelor.

Just a short distance from the former palazzo and the Spanish Steps sits another Borghese home, constructed in 1550, that has undergone an incredible renovation. While original architectural details such as the marble staircase and ceiling beams have been preserved, welcome touches of modernity have been introduced to the 10 units, including elevators, central air-conditioning and heating, smart systems and concierge services.

The penthouse, a 5,380-square-foot duplex occupying the fourth and fifth floors, includes a rooftop garden with 360-degree views that stretch from the nearby high-fashion district and across the Eternal City. Listed for $27 million with Carratelli Real Estate and Luxury Portfolio International, the apartment comes furnished by Armani Casa, from the kitchen cabinetry to the Essex armchair, Dandy bed and Gardenia bench in the primary bedroom suite. Three other en suite bedrooms, a separate staff suite, plentiful storage and a fully equipped fitness studio join the kitchen (stocked with Gaggenau appliances) and living and dining areas on the main floor. Above them, a second kitchen and lounge area with fireplace and solarium open onto the terrace. And the penthouse comes with one of Rome’s most princely treats: a parking space.