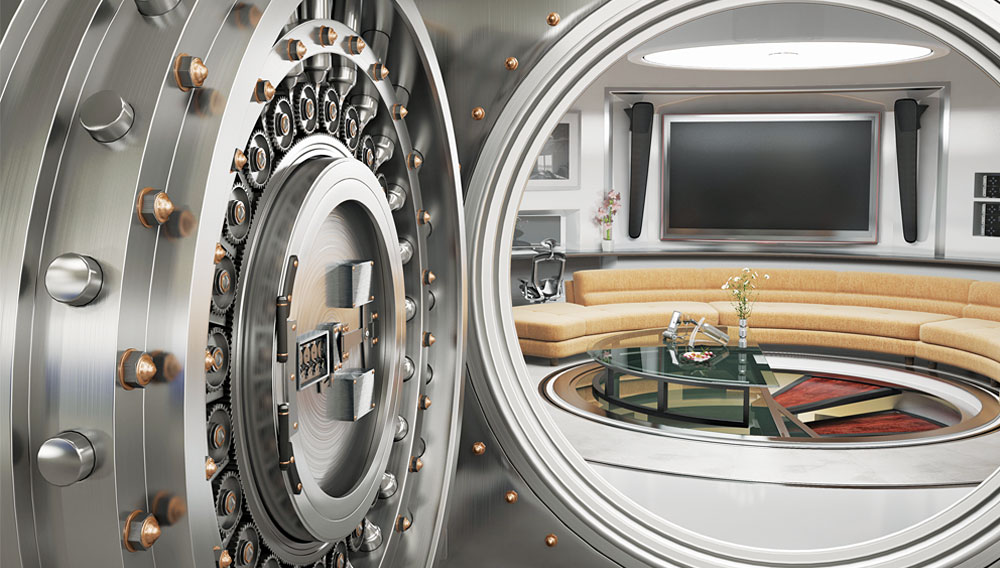 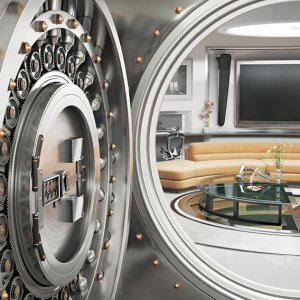 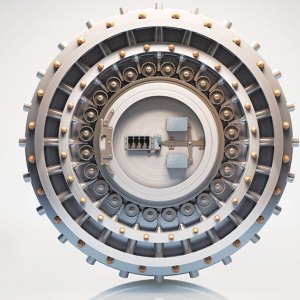 A safe room designed by Brown Safe Manufacturing that features the latest in high-tech security; offers storage for cash, jewelry, watches, wines, and more; and incorporates the vault door from the final bank robbed by the infamous Dalton Gang.

™ On the morning of October 5, 1892, five heavily armed men wearing crude disguises rode on horseback into downtown Coffeyville, Kan. The men split into two groups and proceeded to enter the town’s two banks, First National and C.M. Condon & Company. Inside First National, two of the gang’s members forced a cashier to open the massive vault door and begin emptying the vault’s contents. Meanwhile, several townspeople who had been alerted to

the robbery gathered at a nearby general store and took up firing positions. When the smoke cleared, four members of the Dalton Gang, which had been terrorizing the Midwest for more than a year, were dead. The only surviving gang member was taken into custody after being shot more than 20 times.

For this gift, Brown Safe Manufacturing will extract the original 12-inch-thick steel vault door from Coffeyville’s First National Bank and incorporate it into a safe room worthy of a James Bond villain. During its more than 30-year history, the San Diego–based manufacturer has produced some of the world’s most secure safes and vaults, including ones commissioned by the U.S. military to store nuclear warheads. This gift would be the company’s most ambitious in-home project to date.

The gift consists of a dedicated space as large as 700 square feet that Brown will construct at the recipient’s home. After installing the vault door as the space’s entry point, the company will retrofit it with cutting-edge security technology, including military-grade biometrics, a glass-plate titanium relocking system that acts as a fail-safe if the door is tampered with, and a triple-redundant 144-hour time lock. Because the door is so large—weighing approximately 2 tons—Brown will equip it with a ceramic-bearing hinge system that makes it easy to open when unlocked.

Of course, as the cashier at First National learned 121 years ago, having a secure vault is pointless if a burglar can force its owner to open it, which is why the Brown vault doubles as a safe room. In case of emergency, the owner will be able to hide out in the secured space for as long as two years. (A fold-down bed and a bathroom will ensure comfort throughout the stay.) The room will have a 100-kilowatt generator for backup power and will feature systems for fire containment and filtration of chemicals and radiation. A security station within the vault can be integrated with the home’s existing security system or serve as an extra layer of protection. From this station, the owner can monitor the status of the home and contact the outside world.

But the Brown vault is not just about preparing for the worst; it is also about giving the recipient the ultimate space to enjoy his or her personal treasures. Wall cabinets for storing prized possessions, accessed via a powered lift, will line the room. For serious watch collectors, there will be an Orbita mechanical watch panel comprising 72 winders. The room also will have a curved couch that can be rotated to face an 84-inch Sony 4K TV and a McIntosh Labs reference audio system with MartinLogan electrostatic speakers. The rotating couch will sit atop a spiral staircase that leads to an underground compartment with temperature-controlled spaces for food and as many as 1,000 bottles of wine. This subterranean area could also include a 300-cigar humidor.

At the press of a button, a large circular light above the couch will hydraulically lower from the ceiling, exposing the filtration systems, equipment for the security system, storage for weapons and valuables, and other components of the vault’s nerve center. The owner’s nerves, of course, will always be at ease, as the safe room, according to Brown officials, will repel not just a gang of would-be thieves but anything short of a direct nuclear strike.