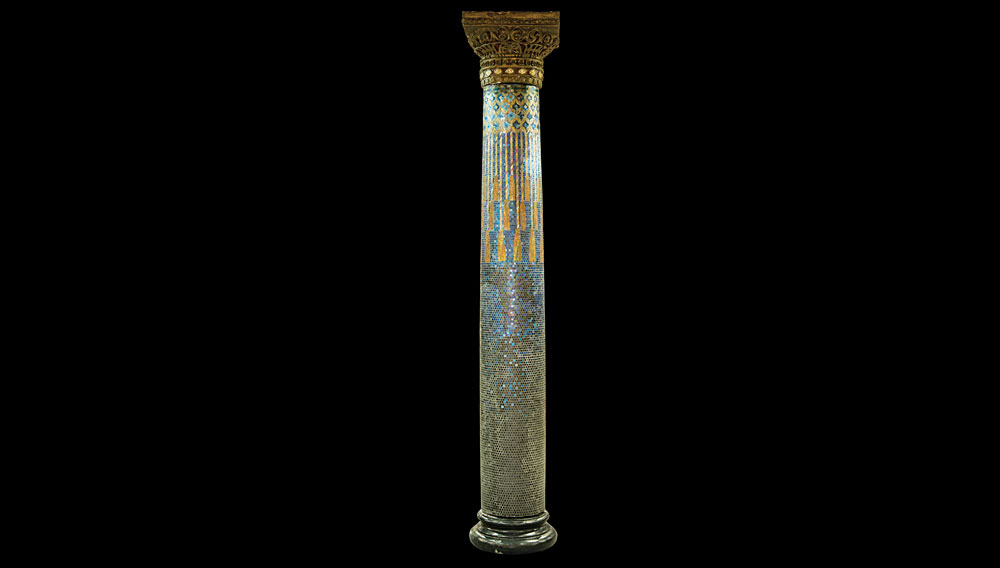 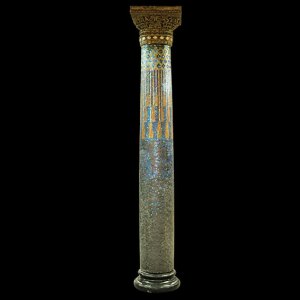 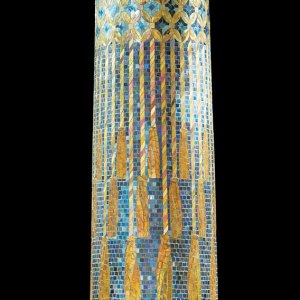 ™It is tall, slim, and stunning, and it weighs 400 pounds—at least 400 pounds. Louis Comfort Tiffany’s artisans made this Byzantine-style, blue-and-gold mosaic column, along with five others, in the 1890s or 1900s for display in the Tiffany Studios showroom in Manhattan. The columns shared space with the studio’s famous windows and lamps. Alastair Duncan, a Tiffany expert, first encountered this column in the early  1990s, in a

storage facility in Queens. He cleaned it for the person who owned it at the time and readied it for sale. “I had a lot of experience trying to move the damn thing around,” he says. “It takes a small earthmover. It’s very heavy. Not solid; it has a hollow core. But it’s made of concrete.”

The columns may not have been the first thing customers saw when entering the showroom on Madison Avenue, but with their peacock hues and 11-foot height, the pillars were impossible to miss. After the showroom closed in 1937, following the death of Louis Comfort Tiffany four years earlier, all six columns were stored in outbuildings at Laurelton Hall, the Tiffany family’s 600-acre estate on Long Island. They were discovered—unharmed—after a fire ravaged the estate’s main house in 1957, and were sold. One now stands in the Charles Engelhard Court of the American Wing of the Metropolitan Museum of Art in New York, among sculptures by Augustus Saint-Gaudens and windows by Frank Lloyd Wright; another is displayed at the Philadelphia Museum of Art; and two are at the Baltimore Museum of Art. This gift’s column is one of the two that remain in private hands; it belongs to the auctioneer Allen Michaan, who purchased it with the rest of the holdings of a Japanese Tiffany museum that recently closed. Duncan helped arrange the sale to Michaan.

The columns were not entirely fanciful, according to Duncan. They were of a piece with Tiffany’s ecclesiastical work, demonstrating what his artisans could do for the interiors of churches and chapels. The columns’ production involved glassmakers, glass cutters, and mosaic-tile appliers. “I don’t know how many man-hours,” Duncan says. “I do know that it was weeks and weeks and weeks. It was labor intensive the whole time.”

A period photo of the Tiffany Studios showroom depicts two of the columns topped with large Tiffany vases. Duncan says this gift’s column could bear a much heavier load, even a ceiling beam. Then again, it seems perverse to place such a burden on something so beautiful. “This is a lovely object. It really is,” says Duncan. “It’s one more piece of evidence of the enormous versatility of Louis Comfort Tiffany.”

Shipping costs are not included in the price of the column.