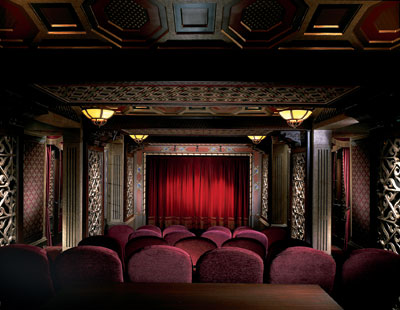 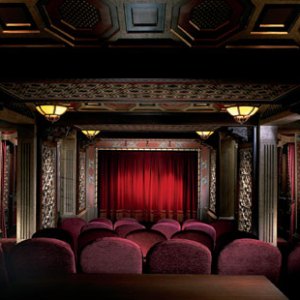 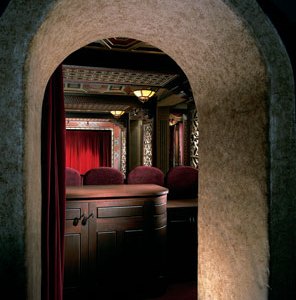 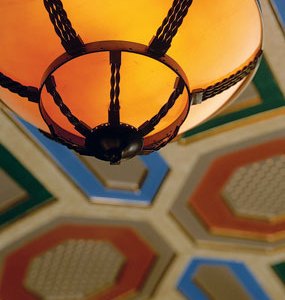 Theo Kalomirakis, the eminent home theater designer, faced several challenges after accepting the commission to create the Toledo theater (pictured) for a 1920s-era Spanish Revival–style home in northern California. “The house is historic, but it is not as ornate as the theater,” Kalomirakis says from his Manhattan office. “It matches the house in terms of style, but it had to have enhanced emphasis on detailing so that it didn’t look like another living room.”

The homeowner’s fascination with Moorish-influenced Spanish designs, which stems from his ancestors’ having lived near the medieval Spanish capital of Toledo, supplied Kalomirakis with an ideal decorative theme for the theater. Colorful, complex geometric patterns, intricate side wall grating, and painted coffered ceilings now enliven the space, which had served as a billiards room for one of the house’s earlier owners. Kalomirakis camouflaged a set of original windows by removing their glass panels and replacing them with mirrors. Red draperies complete the opulent look. He also included a decoration that is particularly poignant to the owner: Leo and Libra, the zodiac signs of the owner’s two sons, are painted on the ceiling.

Kalomirakis has created many home theaters in his time, but he has never before designed one that would be fitted with Goldmund audio/video equipment. This gift presents the chance to be the first to commission a Kalomirakis home theater, such as Toledo, with components supplied by the venerable 27-year-old Swiss company, which opened its first American stores earlier this year.

Unlike most of Kalomirakis’ theaters, which seat only a handful of viewers, Toledo accommodates 21. “In this case, we decided to go with regular theater seats,” he says. “They do not recline, but they respect the size and scale of the room much better.”

Toledo took two and a half years to finish, four months of which a team of three artists spent painting it. “It was a painstaking paint job that took quite a bit of time,” Kalomirakis says.

Among the available Goldmund components is the $89,000 Eidos Reference Player, a machine that can accept DVDs, CDs, MP3s, and several other formats. Goldmund made only 50 of these units, and few remain unclaimed. The proposed equipment list also includes an Eidos 720 DLP projector, a Mimesis 24 universal preamplifier, and 14 Epilogue series speakers, which can be arranged and stacked in a manner that eliminates the need for a centrally placed speaker.

The theater likely will require at least one year to complete.