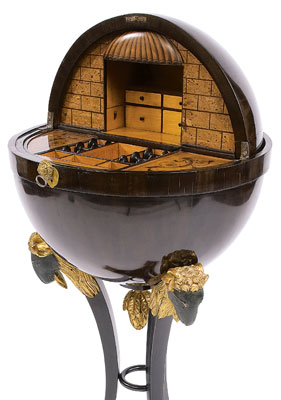 During Napoléon Bonaparte’s reign, European furniture styles reflected his ambition and his ego. Mahogany pieces that were designed and decorated to be grand and monumental—later referred to as the Empire style—filled the homes of the aristocracy as well as those of the middle class. But after Napoléon’s defeat at Waterloo in 1815, Europe experienced a long period of peace and relative tranquillity. The art and design trends of the era reflected that mood and became known as the Biedermeier period.

The name derives from a fictional character, Gottlieb Biedermaier, who appeared in a Munich humor magazine published in the 1840s.

Biedermaier—when the name later became attached to the design style, the spelling changed to Biedermeier—came to represent the German citizenry and its pursuit of comfortable homes and happy family lives. The Biedermaier character viewed the world in simplistic terms, and the design movement that eventually bore his name and had spread throughout central Europe in the first half of the 19th century reflected a similar perspective. Absent were the gilding and other elaborate adornments that characterized the Empire style. The new designs were more minimalist, incorporating traditional shapes and emphasizing the natural beauty of the wood and other materials used.

Biedermeier furniture usually was constructed of flat planes of wood that then would be coated in a veneer. Craftsmen often applied the veneers vertically to create the illusion that the piece was larger than it was—a practice that no doubt would have gained Napoléon’s approval. The veneers could include wood from the roots of diseased trees, material that was grotesquely disfigured but nonetheless symbolic of nature’s power and thus highly coveted.

The Biedermeier piece offered here is a 3-foot-tall Viennese globe-shaped worktable built in 1815 as one of a pair for the British poet Lord Byron. Its mate is in the collection at Buckingham Palace. “The globe table is a phenomenon unique to the Biedermeier period,” says Laurie Winters, curator of earlier European art at the Milwaukee Art Museum, which, through the end of December, is hosting an exhibition called Biedermeier: The Invention of Simplicity. “You have a globe-shaped object and this veneer that bends around the entire shape and becomes a type of exterior ornament, and the inside is a very decorated and detailed private universe.”

Private collectors have been well ahead of museums in their appreciation of Biedermeier, says Winters, explaining that until recently, museums have inaccurately classified it as art of the bourgeoisie. “But bourgeois or aristocratic isn’t the point,” she says. “The point is that it’s really beautiful.”

The globe table was constructed when the Biedermeier style still was taking hold, and so it displays some elements of the Empire period. Its ebonized, maple-veneered hemisphere is characteristic of the Biedermeier era, but the gilt and verde antico ram heads and hooves on the table’s legs are holdovers from Napoléon’s reign. “[These tables] are among the rarest objects made during and collected from the Biedermeier period,” says Rita Bucheit, whose namesake antiques gallery is offering this gift. “Globe tables were the best way for furniture makers to display their craftsmanship.”