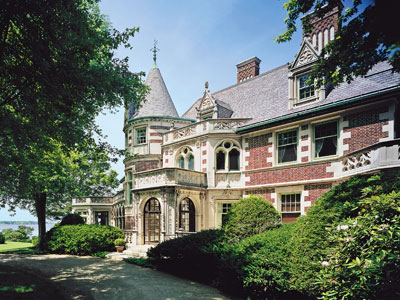 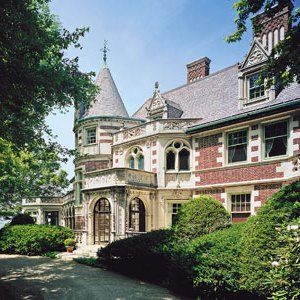 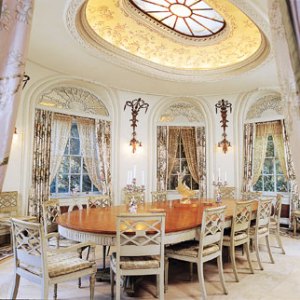 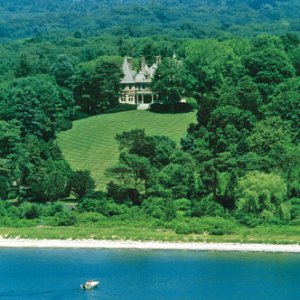 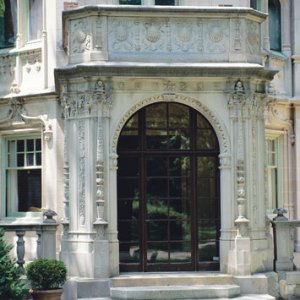 When neither east nor west is best, when matters on the Atlantic and the Pacific coasts demand equal attention, or when the virtues of both locations are equally alluring, it becomes desirable to own homes on both sides of the country. In addition to being beautiful, well situated, secure, and close to the ocean, this pair of estates—one on the North Shore of Massachusetts and the other overlooking San Francisco Bay—offer a sense of permanence: In addition to its many other amenities, each comes with at least a century of history.

A 10-room, 10,000-square-foot, three-story, Classical Revival–style mansion, originally built in 1895 on an island near San Francisco and later replicated in a six-year project that concluded in 2004.

Situated on one acre, the estate features a terraced garden as well as bronze lanterns and bronze entrance gates designed by Julia Morgan, who also designed the Hearst Castle in San Simeon, Calif.

Price $65 millionThe exterior of the Wyck Estate is decorated with numerous sculptures that were carved and installed during the mansion’s 1912 renovation, but an amusing surprise hides among the small stone depictions of cherubs, animals, and people. Peeking down from a second-floor window to the left of the front entrance is the figure of a racecar driver wearing goggles and gripping a steering wheel. The statue is one of countless details that contribute to the 100-year-old mansion’s charm. Situated on a 10-acre parcel that has remained intact through the decades, the home, which is named after a Pennsylvania property that belonged to an ancestor of the current owners, offers countless other unique features.

The estate originally was built in 1900, but it gained its present form when then-owner George Robert White, a Bostonian who made his fortune in pharmaceuticals, commissioned an ambitious renovation that began in 1910 and concluded two years later. White had the exterior redone in imported French tapestry brick and its entrance carved from French Caen stone. He also added a breakfast room, which has a skylight made from translucent pieces of alabaster instead of glass, and a dining room paneled in dark Circassian walnut from Russia. White’s estate sold the house following his death in 1922. Little is known about its subsequent owner, but the house was vacant when the father of its current owners, who prefer not to be named, purchased the property in 1944 or 1945. One of these owners says that the dining room’s walnut alone probably cost $125,000 (roughly $2.5 million in today’s dollars), and that it would be impossible today to obtain a comparable supply of the rare wood.

The house contains 11 bedrooms, seven full bathrooms, three half bathrooms, nine fireplaces (all functional), two dining rooms, a living room, a reception room, a kitchen, an office, a library, an octagonal stone entranceway, and numerous stone terraces, some of which provide views of the Atlantic Ocean, the Misery Islands, and the Boston skyline, which lies about 30 miles south.

Frederick Law Olmsted, the noted landscape designer, shaped the rolling lawns of the grounds, which also include a quarter-mile length of beach. While private, the beach is open by law to the 30 families who live on Smith’s Point, the peninsula on which the estate is situated. The property also has a carriage house with a three-bedroom apartment and a six-car garage, a filtered saltwater swimming pool, a tennis court, a boathouse, and a children’s playhouse equipped with plumbing and electricity.

The estate’s next owner will not need to worry about certain expensive maintenance tasks: Two chimneys were recently rebuilt, the slate roof and the copper flashings were renovated within the last 10 years, and the property’s listing agent, Lanse Robb (who has no connection to Robb Report), says that an updated septic system that complies with current state regulations will be in place soon.

While the Wyck Estate has reached the century mark, Robb, who works for the LandVest agency, says that it is not subject to the regulations of a historic commission or similar laws. It is perfectly suited to certain timeless needs, however. “There’s one way in and one way out, so from a security standpoint, it’s pretty safe,” Robb says. “If you want to hide here, you’ll have privacy.”

The furniture is not part of the sale, but individual pieces might be available.C.O. Perry, the San Francisco banker who commissioned the construction of Locksley Hall on Belvedere Island, hailed its completion with a grand party in the summer of 1895. The San Francisco Examiner reported on the plans for the fete, noting that the home cost $20,000 (only about $462,000 in today’s dollars) “and is the finest in Belvedere, and the housewarming is to be quite a social event. Such a large number of people from the city are expected to attend that Mr. Perry has chartered a special steamer to take his guests home.” But Perry’s happiness was short-lived, according to an account provided by the office of Olivia Hsu Decker, the listing agent for the property. It claims that Perry built the house (the name of which sometimes appears as Loxley Hall) in hopes of impressing a concert pianist who had captured his heart. Apparently, he would have been better off investing in mouthwash, for the unnamed young woman allegedly refused his marriage proposal because of “halitosis.” The story does not specify whether it was Perry or the musician who suffered from the affliction.

A decade after its completion, Perry sold the estate in 1904 or 1905 to Gordon Blanding, a San Francisco lawyer (giving rise to an alternative name for the property: the Blanding House). In addition to purchasing Locksley Hall, Blanding bought 30 surrounding acres at the southern tip of the 320-acre island, which is home to the San Francisco Yacht Club and can be reached from the mainland via a causeway.

Locksley Hall may not have been Blanding’s dream house, but it became a welcome refuge after the earthquake of 1906 struck San Francisco. Shaken by the disaster, he sailed his family to Belvedere and sold his home in the city. Blanding continued to reside on the island until 1910, when he began renting suites at the Fairmont Hotel and using Locksley Hall as a weekend and summer home. He sold the home and land for $150,000 in 1940, five years before his death.

Today, Locksley Hall is the same, yet different. A total of 29 of its 30 acres were sold in the intervening years, but other changes are less obvious. Beginning in 1998, the current owners spent six years completely rebuilding the home in accordance with its original design. Although Perry and Blanding would recognize this new version of Locksley Hall, it now has such modern amenities as an elevator, a spa tub in the master suite bathroom, and a poolhouse with an indoor/outdoor sound system and a hot tub that overlooks San Francisco Bay. In all, the home has six bedrooms, seven full bathrooms (counting the one in the poolhouse), two half bathrooms, three kitchens, a living room, a dining room, a breakfast room, an office, three guest suites, a caretaker’s apartment, and a two-car garage.