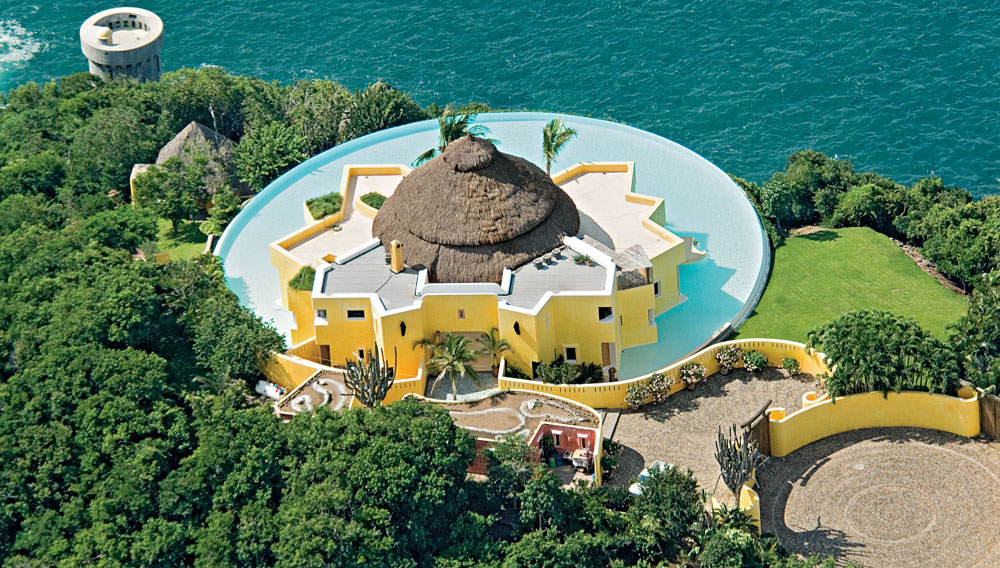 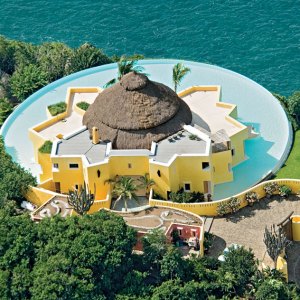 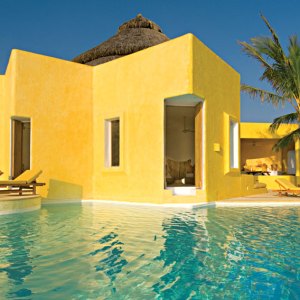 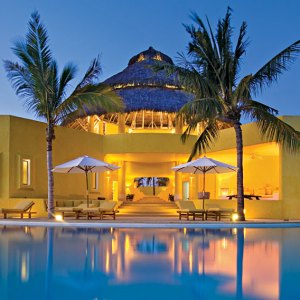 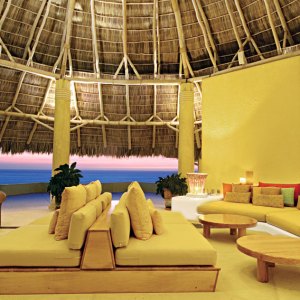 In 1968, Italian real estate developer Gian Franco Brignone fell in love with the lush jungles, vast sandy beaches, and agreeable year-round climate of Mexico’s Costa Alegre. After a single visit to the region—a nearly 175-mile stretch between Puerto Vallarta and Manzanillo—Brignone purchased thousands of undeveloped acres, moved from Paris, and set out to build an exclusive vacation community that blended the best of Mexico and the Mediterranean.

Some four decades later, Brignone’s development, Costa Careyes, is one of the world’s elite beach destinations. The approximately 100-home community features a vibrant mix of beachfront bungalows, hillside casitas, and clifftop villas, and has long been a popular retreat for celebrities and other high-profile guests. The resort’s biggest stars, however, are Brignone’s three beloved Castillos (Castles) de Careyes. These striking clifftop villas—Mi Ojo, Sol de Occidente, and Sol de Oriente—helped establish the area’s Mediterranean-meets-Mexican design style and have since become benchmarks for luxury vacation homes worldwide. Now, for the very first time, one of the three castles is being offered for sale, available exclusively to one Robb Report reader.

Built in 1996 by Brignone and French architect Jean Claude Galibert, Sol de Oriente (Eastern Sun) is the most renowned and oft-photographed of the Castillos. The six-bedroom, seven-bathroom villa was originally conceived as a lagoon-side home for the late British-French financier Sir James Goldsmith. But when Goldsmith backed out (opting instead for a 2,000-acre estate next door to Careyes that eventually became the Cuixmala resort), Brignone recast his blueprints: In place of the lagoon, an 11,000-square-foot infinity pool would hug the property like a moat; instead of a jungle setting, Brignone moved construction to one of Careyes’ highest southeast-facing peaks, creating a veritable castle in the sky.

The main entryway of the sunburst-yellow home—which has starred in music videos and several fashion shoots over the years—leads to a circular pebble-floor lobby. This open-air space connects to two large guest bedrooms and a master suite, the latter painted in bone white and decorated with an eclectic blend of Mexican and Indian artworks and furnishings. Steps beyond the lobby lie the massive moat pool and an ocean-view terrace, where one could rise with the sun and waste an entire day studying the flight patterns of the dinosaur-like frigate birds that soar close enough to touch.

Designed for entertaining, Sol de Oriente’s open-air upper level is protected from the elements by a large palapa and includes a formal dining space, a living area with bed-sized couches, and a sprawling sundeck with panoramic views of the coastline below. A footpath alongside the main villa leads down the hill to two small bungalows with sleeping quarters. An electric funicular ferries guests farther down the 2-acre property to a castlelike tower containing Oriente’s sixth suite.

Though it enjoys a private perch on the cliff, Oriente is convenient to all the amenities and action at Careyes. In addition to its villas and other residences, the nearly 5,000-acre community is home to restaurants, a spa, an equestrian center, world-class polo grounds, a cultural center, a nature preserve, and miles of undeveloped beaches.

The Price of this gift includes the estate and all of its furnishings. Housekeeping, chefs, gardening, transportation, and any operational maintenance fees are not included.