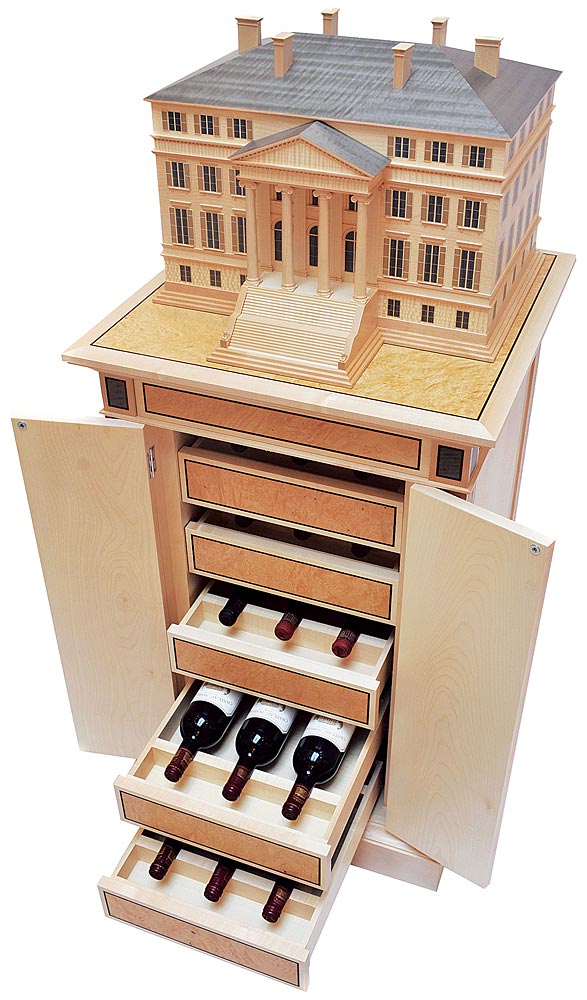 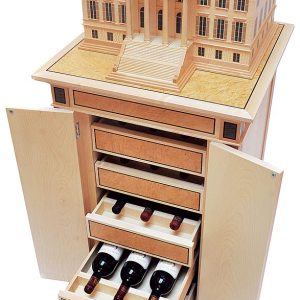 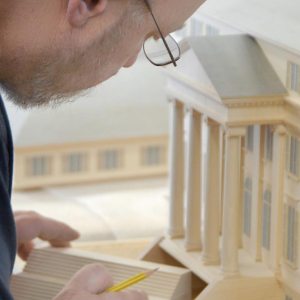 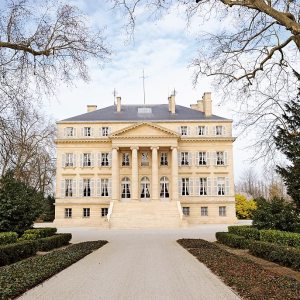 by David Linley as scale replicas of Bordeaux’s

Eighteen bottles per cabinet of the corresponding

château’s finest vintages from the 20th

“Years ago, wine was most often hidden away in dark and damp cellars,” says Stephen Williams, founder of the London-based Antique Wine Company. “But now it has become part of a home’s design feature and is shown prominently in dining rooms and entertainment areas; even cellars are becoming as magnificent as they are functional. So we started to think that it’s important not only to sell precious and collectible wines, but also to help our clients enhance their wine’s presentation.”

“The cabinets are a labor of love,” says Linley’s founder, David Linley, who is the son of Princess Margaret and a nephew of Queen Elizabeth II. “They symbolize the very, very best of what we do—with features such as inlays, geometric patterns, and horizontal storage. Some of my favorite details are the secret drawers, which are very much a thing that we revived from the 18th century, where people used to request secret drawers built into their cabinets to keep things safe. Now, we just treat them as a humorous part of the piece.”

Over three years, Linley’s firm will design and construct architectural models of seven other famous Bordeaux wine houses: Château Cheval Blanc, Château Haut-Brion, Château Lafite-Rothschild, Château Latour, Château Mouton Rothschild, Château Petrus, and Château d’Yquem. In keeping with the precedent set by the initial Château Margaux series, Linley will craft only five examples of each château cabinet, which he will make from sycamore, burr ash, and Bombay rosewood, using detailed architectural studies as reference points. In addition to secret drawers, each cabinet will hold 18 bottles of the corresponding estate’s finest vintages from the 20th and 21st centuries. Each series will take six months to complete.

The first example from each series will be reserved for the owner of the relevant château; the second will stay with the Antique Wine Company; and the remaining three will be sold separately for approximately $390,000 each. However, Williams has agreed to sell to one Robb Report reader a complete eight-piece collection that includes the Château Margaux cabinet he has set aside on reserve. Williams will also escort the recipient of this gift to Bordeaux, France, for personal tours of each of the eight châteaux represented.

“My guess is that the lucky owner of the complete series will probably disperse the collections among several of their own homes,” say Williams. “Either that or display them all together in a long wine cellar.”

The complete series is reserved for one Robb Report reader until January 1, 2009 • Cabinets will be made over the course of three years • each cabinet will be delivered upon completion.