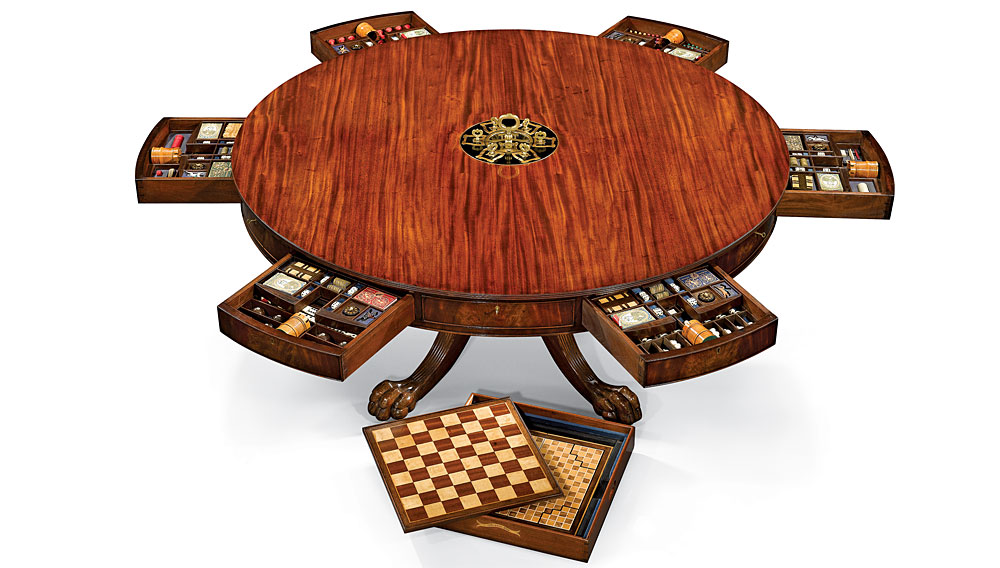 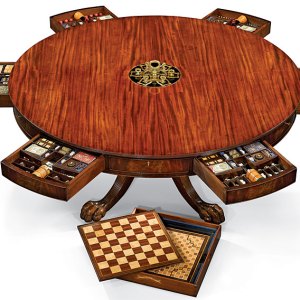 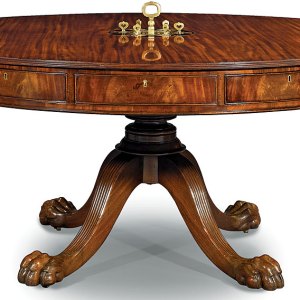 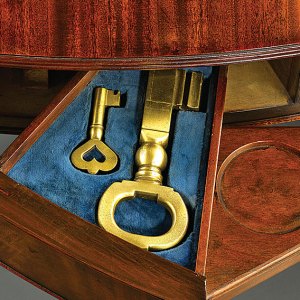 An elaborate circa-1875 games table, equipped with original pieces and made specifically for the Albemarle Club in London, the famous private club that was rocked by the Oscar Wilde scandal.

A set of 12 dining chairs, circa 1860, created from designs by Thomas Chippendale.

Oscar Wilde once said, “One should always play fairly when one has the winning cards.” And Wilde likely wagered many bets at this very table, an intricate survivor of the Albemarle Club in London. When the club, established in 1874, disbanded in the early 1900s—partly the result of the scandal involving Wilde—the games table was acquired by one of its members. For nearly a century, it resided in his English country house, until an elderly grandson—who prefers to keep his identity private—decided to sell it. Now the table is being offered exclusively to Robb Report readers as a gift of extraordinary craftsmanship and racy pedigree.

“It is the most over-the-top game table ever constructed, and the fact that it has survived perfectly is amazing,” says Bill Rau, owner of M.S. Rau Antiques of New Orleans, the table’s purveyor. In pristine condition, the table is constructed of Cuban mahogany and satinwood inlays and has a unique locking mechanism at the center. Six individual brass keys stamped with the club’s name correspond to the drawers, and a huge master key unlocks them all at once. Each drawer holds the original pieces and boards for hundreds of games, including ivory chess pieces and an inlaid wood horse-racing board with wood fences and horses. Naturally, each drawer is also equipped with a sliding shelf for a cocktail. Rau selected mahogany Chippendale-inspired chairs, circa 1860, to accompany the table. The 10 side chairs and two armchairs feature carved legs and leather seat cushions.

As fascinating as the table itself may be, its salacious provenance is even more intriguing. The Albemarle Club was rocked by scandal in 1895 when the Marquis of Queensberry came to the club demanding to see Wilde. When he was turned away, Queensberry left his calling card with the infamous note “To Oscar Wilde, posing somdomite [sic].” Those five words led to the worst wager in Wilde’s life: He sued the marquis for libel. The case failed spectacularly and led to Wilde’s criminal prosecution, imprisonment, and ultimate financial ruin. The Albemarle Club became notorious by association and closed soon after.

While the scandal followed Wilde until his death at age 46, his razor wit will always give him the last word. “Anyone who lives within their means suffers from a lack of imagination,” he said—and we know he had quite an imagination.