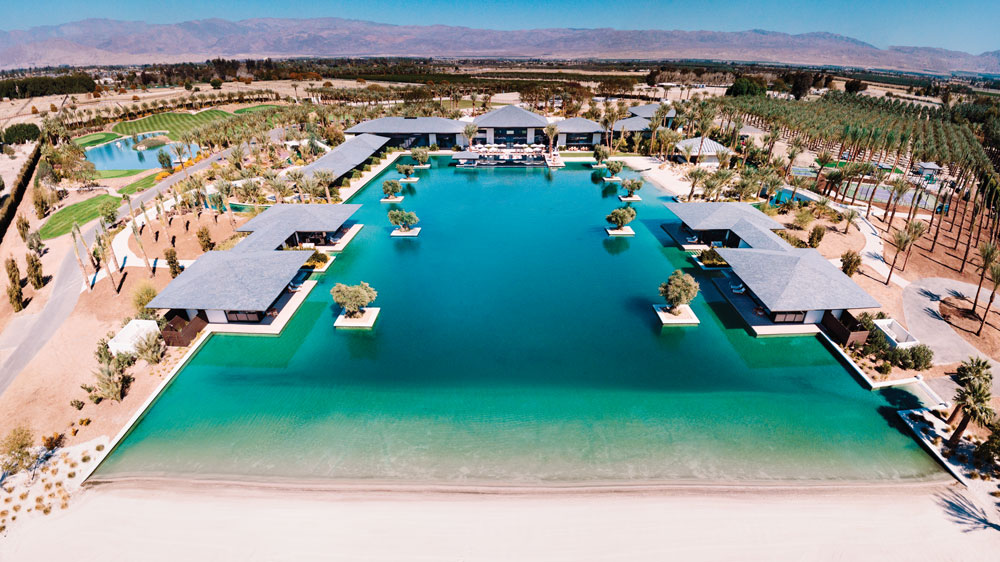 Allan Quatermain—protagonist of the 1885 fabulist novel King Solomon’s Mines (and the Indiana Jones of his day)—recounts, “By noon of the third day’s journey we could see the trees of the oasis . . . and within an hour of sundown we were walking once more upon grass and listening to the sound of running water.” Imagining Quatermain’s oasis expanded into a sprawling, resort-size paradise hints at what greets journeyers to this modern-​day, 37-acre oasis in the Coachella Valley, which boasts an 11-bedroom, 40,000-square-foot residence; working horse and date farms; a 6-acre Clive Clark–designed golf course; an enormous lake; canals; a petting zoo; horse and bike trails; pickle-ball and tennis courts; a pool and spa; and a helicopter pad.

As architect Gregory J. Smith says of the design team—which comprises interior designer Dorothy Willetts, Bradshaw Construction’s Mark Bradshaw, and landscape architect Anne Attinger—“they took a flat piece of land and made something unimaginable: a place that pushed the limits of reality.”

Push limits it did, from concept to fruition. The raw, undeveloped land was a working pasture, says Bradshaw. “Since it was just outside the city limits, we had to bring in utilities from over one mile away,” including domestic water, gas, and electricity. And because of the scale of the project, infrastructure capacities had to be multiplied tenfold. “A typical house is powered by a 200-amp main panel,” Bradshaw notes. “This one is 2,000 amps.” The owner, a real estate developer and active sportsman, wanted an uninterrupted indoor-outdoor connection, which necessitated “as much glass as building codes allowed,” says Smith (of Uberion Architecture + Design). Consequently, because very few solid walls go from floor to ceiling, Bradshaw points out, “We used more steel than there is in nearby Indian Wells Stadium,” which hosts the BNP Paribas Open tennis tournament.

Essentially, the team created “an island in the desert,” says Willetts, a place that now holds its own fascinating mythology. The fundamental vernacular was Indonesian. “It’s meant to evoke the fabled sea serpent at Tanah Lot Temple in Bali,” explains Smith, but the home was meant for modern recre-ation. Achieving the desired aesthetic in the middle of an arid valley required great subtlety to prevent the complex from appearing completely out of place. Willetts knew there could be no lush palm-frond patterns or bright, beachy colors. Rather, she explains, “everything had to be very textural and earthy, very elemental and contemplative, to convey an island-inspired luxury destination home with South Pacific and Caribbean influences.”

Palette and furnishings hewed to the architecture’s Asian demeanor. “To me, sage greens, terra-cottas, and grays all have a Zen feel,” says Willetts. “And the red nods to the Asian influence.” She was particularly resourceful with art and accessories, since antiques and paintings might tip the house too much toward formality. She sought a more organic feel and skillfully framed textiles and Indonesian shadow puppets and arranged indigenous artifacts on tables and shelves, imbuing the space with soul. For all the elements to find harmony—with the water, sky, and captivating views—Willetts’s design had to thoughtfully merge style and serenity.

The heavy reliance on steel for construction not only allowed wide overhangs to shade against the harsh desert sun and shield against the winds but also permitted the wood-covered ceilings inside to peak at 37 feet. The furniture needed to be impressively proportioned and balanced as well as comfortable. “[The client] wanted seating to be extra deep, because he’s very tall, and lots of his friends are athletes,” says Willetts. “We had muslin mock-ups made so he could see how the furniture felt.”

The only viable solution was to custom build the pieces. “So much had to be designed and made for the project, down to the billiard and ping-pong tables in the game room,” notes Willetts. And given the project’s abbreviated schedule, “I had to go to people I knew I could rely on.” Creating original pieces gave her more control over production. Living-room porcelain lamps and bar pendants were commissioned from Mirena Kim Ceramics. Willetts worked very closely with French artist Etienne Moyat to create sculptural carved-wood panels for several rooms. And she relied on A. Rudin for upholstery. “They make everything in the U.S., and their factory is in Los Angeles. The client lives in Beverly Hills, so it was easier to have him sit-test.” (Bradshaw adopted a similar philosophy with trees planted in “islands” set into the main lake. He flew the landscape-design team to Northern California to walk old olive groves and handpick the trees, which are over 110 years old, because he says “if you wait 30 days for them to arrive and they’re not right, you’re S.O.L.”)

Outside, Attinger broke the project into quadrants: a date farm resplendent with over 1,000 palms, a horse ranch, a pasture doubling as unconventional golf course, and the residential compound. “Immediately adjacent to the main house and canal, the plantings suggest a subtropical feel,” explains Attinger. “The guest quarters have a simple, stylized desert landscape.” Japanese-style garden vignettes also punctuate the property.

Had Quatermain’s party happened upon this oasis, discovering the treasures of King Solomon’s storied mines might have suddenly seemed ridiculously beside the point. What riches, after all, could rival these splendors?