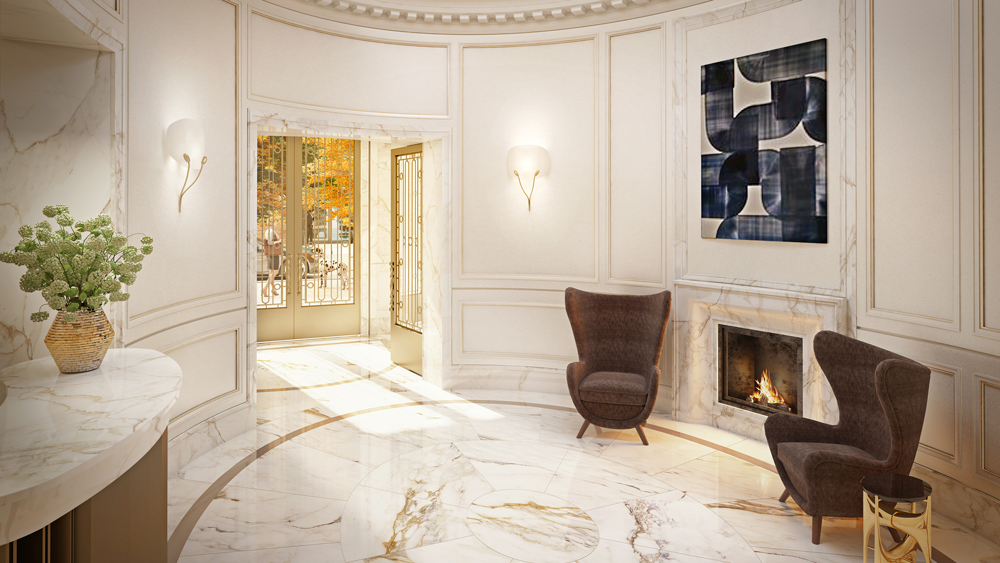 When New York City real estate development and investment firm Alchemy Properties unveiled its latest project—an 18-story luxury apartment building—they got one of the country’s most prestigious architects to sign-on. Consequently, Robert A.M. Stern has envisioned everything inside and out, from the exterior to the interior finishings, at Two Fifty West 81st Street on Manhattan’s Upper West Side.

According to the developer, the edifice will contain 31 condominium residences with some 6,000-square feet of amenities—among them, a wellness center, library, and rooftop terrace outfitted with the latest in outdoor appliances and furnishings. Priced between $3.8 million and $15.75 million, the apartments will be ready for occupancy in January 2019.

Robb Report recently caught up with Stern and firm partner Daniel Lobitz to discuss their latest residential adventure and why this was this was the right time to indulge in some classic New York architectural romance.

You have clearly brought a bit of Classicism back to the West Side, which has seen its share of less fortunate architecture in recent years. What informed your aesthetics for 250 West 81st Street?

Robert A.M. Stern: 250 West 81st Street is meant to be a good neighbor to earlier Upper West Side apartment buildings, particularly the wonderful buildings on West End Avenue, which for a long time were underappreciated but are now very much appreciated by the people who live in them. On Broadway, there are some wonderful buildings such as the Belnord, one of the great apartment buildings in New York City and maybe in the world, which we are refreshing for a different developer.

Daniel Lobitz: The Upper West Side has a long and deep history of Classicism and was in fact the birthplace of the luxury apartment house. The first was the Dakota on Central Park West, which was followed by many illustrious Classical apartment buildings including the Belnord, the Apthorp, the Ansonia, the Dorilton, the Prasada, and many more. This tradition continued until World War II, when it was abandoned with the advent of the white brick apartment house and similar atrocities. Our office played a part in reintroducing Classicism to the new apartment house market in the 1990s and early 2000s, with buildings like the Chatham and 15 Central Park West.

This is our first building in this neighborhood, so in addition to the buildings we’ve already mentioned, and to Classical examples elsewhere in New York and in other cities, we also looked at our new building’s immediate neighbors, some which are not apartment houses, to tie into some of their detailing. For example, the building to the north inspired 250 West 81st Street light gray brick and stone trim, as well as the entablature at the 7th floor, where decorative frames and panels gather the windows into a horizontal band. At the corner of our building, rusticated quoining adjoins large picture windows to create two-story elements that give an intermediate scale to the facades. In addition to the setbacks—some but not all of which zoning dictates—we’ve notched the corners facing south and west, which allowed us to introduce double-exposure rooms that capitalize on views down Broadway and toward the Hudson River.

In older, traditional New York apartment buildings, the standard would be one story of retail, but Broadway in this neighborhood is such an important retail street that over the years two stories of retail has become the norm. We’re continuing that more recent tradition with glassy double-height storefronts along Broadway. We put the residential entrance on the quieter side street, another New York tradition, and we’ve given the facade along 81st Street a rusticated masonry expression. The Classical language enables us to integrate these two aspects of the building into a single identity.

The apartments are already designed. What custom options are available?

DL: The kitchens, master baths, secondary baths, and powder rooms each have their own design that is carried through all the apartments. The designs allow easy customization by residents; we anticipate that people might choose wallpaper, special paint colors, or special paint finishes to make these rooms more specific to their tastes. The kitchens have painted cabinetry that can be repainted, although we have a chosen a beautiful off-white tone.

What aspect of the project did you find the most satisfying from a design point of view?

RAMS: There’s no single aspect; it’s the complexity that makes it most interesting. The opportunity to fit a new building into an existing neighborhood, like filling in a missing tooth. The opportunity to have shops along Broadway, and then turning the corner to create a very quiet residential aspect on the side street. The idea that there are a multitude of apartment types inside, which leads to a rich pattern of windows. And then the setbacks; while many architects roll their eyes at the setbacks required by the New York City zoning ordinance, I welcome them. They give intricacy to the building’s profile and create opportunities for outdoor terraces big enough to entertain.

Tell us more about the actual craftsmanship.

DL: There is a combination of stone and cast-stone. The stonework completed by GMJ Contracting using limestone from Vermont Stone Art includes beautiful carved stone detailing on the lower floors. Some of that detailing switches to cast stone on the upper levels; for that we’re working with skilled craftsmen at­­ Accurate Stone in Brooklyn, a New York company that’s been in business forever. Even with elements of the building that are factory-built, such as windows, we devote a lot of care and attention to collaborating with fabricators to produce something that’s more beautiful, more specific to our design, than you would normally see.

Within the apartments, the kitchens, for example, which we designed in collaboration with Smallbone of Devizes, capitalize on the level of craft that Smallbone can achieve and go beyond what is typical, utilizing some of their signature details along with our own take on what is right for this building. Master baths have beautiful stone detailing with marble wainscots.

RAMS: One of the things I’m totally gratified by is that people have been complimenting me on the building. Most buildings by contemporaries of mine are visually stunning but disliked by New Yorkers; our buildings are the odd man out because they’re so well liked. I am an architect who wants to build buildings for people to enjoy, to live in, to work in, and just to take pleasure in seeing every day as they walk by.

DL: I moved to New York to go to school at Columbia and spent several years living on the Upper West Side. I have great affection for this neighborhood, so the opportunity to do a building right on Broadway—which is a major focal point—is very exciting.