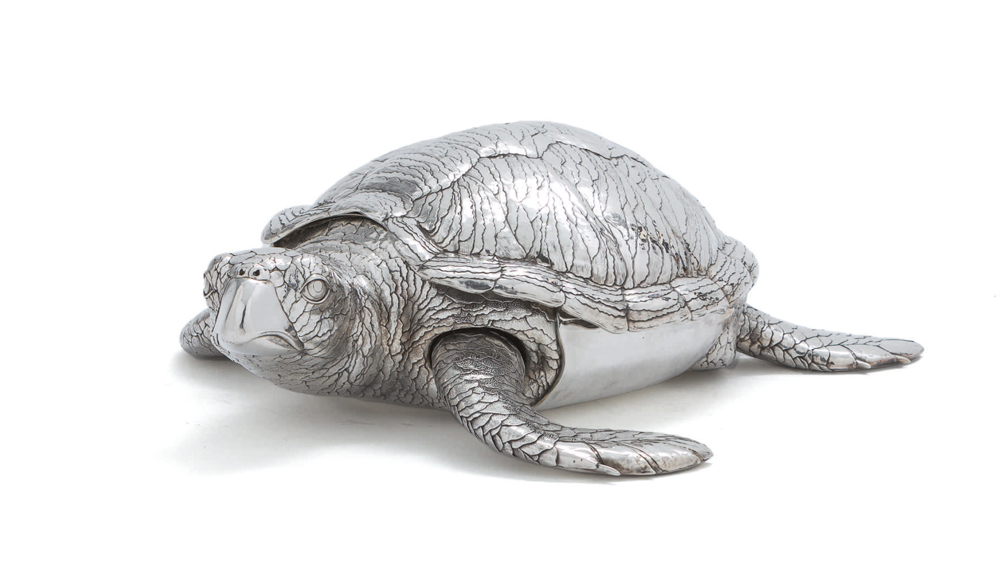 A dozen stunning silver pieces by Italian father-and-son smiths Mario and Gianmaria Buccellati, of the renowned Buccellati family, are among the notable lots in an upcoming auction at Sotheby’s New York on April 20. The private collection from Miami-based interior designer Victor Diaz features an impressive menagerie: Whimsical works in the shapes of animals include a pair of magnum wine coolers in the guise of male and female penguins (est. $150,000 to $200,000), a tureen in the shape of a tortoise (est. $50,000 to $80,000), and a bowl in the form of an octopus (est. $25,000 to $35,000).

A pair of Italian silver wine coolers by Mario Buccellati have been realistically modeled as a male and female penguin. Their hinged heads open to reveal bottle compartments capacious enough for a magnum of champagne. Estimate $150,000 to $250,000.  Photo: Courtesy Sotheby's

A silver pelican by Mario Buccellati, made in Milan during the second half of the 20th century, bears realistic overlapping textured feathers. Estimate $40,000 to $60,000.  Photo: Courtesy Sotheby's

Of the pieces, Diaz says, “Silver and beautiful objects of all genres have long been one of my passions, and it has been a joy to incorporate these exquisite pieces into my everyday life. While it is bittersweet to part with a collection that I’ve amassed over two decades, it is a pleasure to be able to share my vision of how both new and seasoned collectors can embrace these opulent yet functional works in their own unique spaces.”

Other standout lots include a group of pieces by the revered Danish design company Georg Jensen, led by a rare silver seven-light chandelier designed in 1920. Tagged at $150,000 to $250,000, the fixture is one of only six known silver chandeliers by Jensen, the founding artist. According to the catalog notes, Diaz acquired it from Jensen in 2012 and worked with the company to create a matching hook for the chain to accompany the piece.

“Diaz has used his designer’s eye and keen sense of quality to put together a collection that mixes Georgian candlesticks with modern Latin Art, Victorian tablewares with fabulous Buccellati animal sculptures, and usable 20th-century designs by Georg Jensen and Stuart Devlin,” says John Ward, head of sale for the house, adding that, “His pieces and the way that he lived with them show that the bright metal can be fun and contemporary.” In all, more than 150 objects from the designer’s home will be on offer.