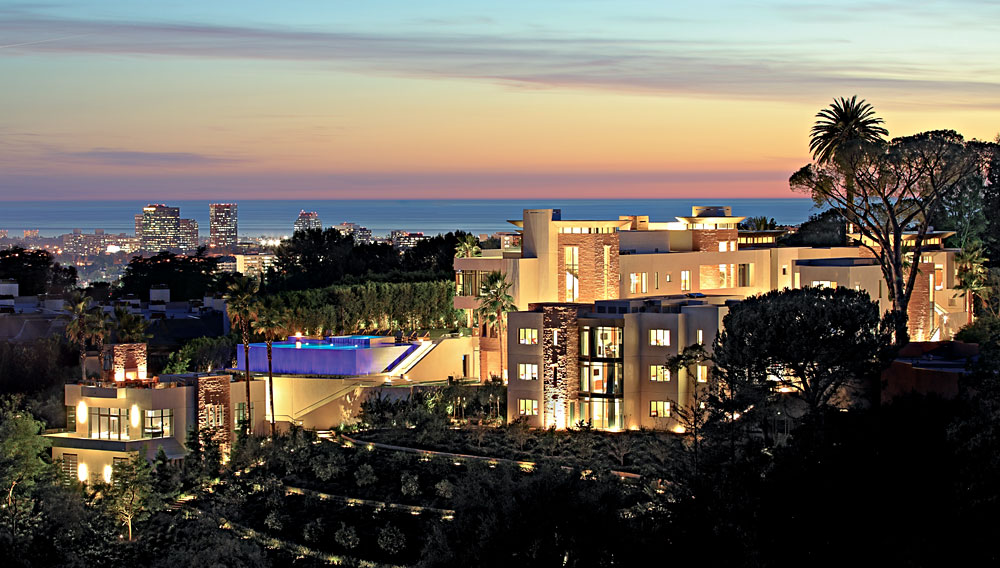 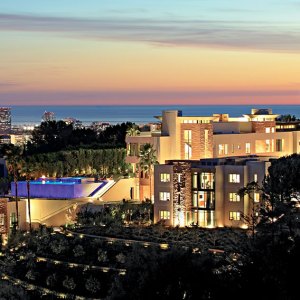 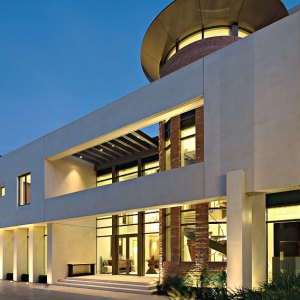 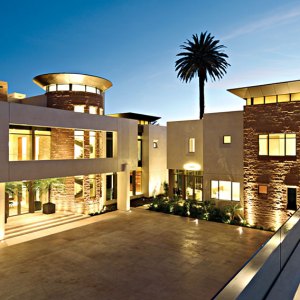 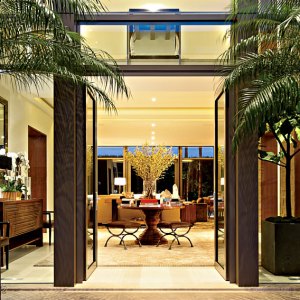 Perched atop a hill in Southern California, this newly completed family compound rises above the competition with its dramatic interplay of light and shadow, unparalleled city and ocean views, full spa, and other arresting amenities, earning it the distinction of being named Robb Report’s Ultimate Home 2011.

Face Value | When the owner of this 28-bedroom, 40,000-square-foot residence on roughly 1.5 acres of land in the Los Angeles area first met with architect Richard Landry of Los Angeles–based Landry Design Group in 2005, he held in his hand a single image—a picture he had torn from the pages of this magazine. “The client handed me a page from Robb Report; it showed a modern residence in Southern California our firm designed,” says Landry. “He said he wanted something along those lines, but built to his specifications. We discussed a few details, and then he said, ‘Show me what you can do.’ ”

To that end, Landry—the architect behind Robb Report’s Ultimate Home two years running—conceptualized a contemporary family compound made up of several discrete buildings, including the main house and separate quarters for staff, guests, and entertaining, all of which take full advantage of the exceptional views afforded by the hillside site. “We wanted to evoke a feeling of transparency for this house,” he says, “with many different layers and floating walls, in order to give it an extra dimension.”

The homeowner selected McCoy Construc­tion to handle build-out, and Landry worked with ValleyCrest on landscape design and collaborated with designer David Phoenix on the interiors. Sue Firestone and her company, SFA Design, helped oversee the project’s management, including acquiring furnishings.

All told, the project was a three-year endeavor from groundbreaking to its conclusion last June. “The home is designed to age well over time, with classical-modern shapes, good proportions, and subtle details,” says Landry, who set the home’s tone with a geometric stucco plane on the entrance facade, which is dominated by floor-to-ceiling glass and towers clad in rough-faced sandstone.

Unified Front | A footbridge links the service, staff, and guest buildings that flank the home’s main entrance and motor court, beneath which is an underground parking garage. Landry placed another bridge in the entrance hall (right), where Phoenix tempered the severity of the Portuguese limestone floor with a custom silk-and-wool rug from Tai Ping, an oversize rosewood table from Jean de Merry, and bronze stools from Holly Hunt. “The entrance has a big volume, so the trick was to soften it a little bit and make it a more inviting place to pause before entering the main rooms,” says Phoenix. “Mod­ern, but warm,” adds Firestone, “was the prerequisite from day one with the client.”

To help guide the visitor’s attention through the entrance hall (opposite) and toward the living room beyond, Landry extended an aluminum ceiling trellis inward from the exterior. “I wanted to create a continuance from the outdoors to the indoors to further unify the space,” he explains. The lighting systems here and throughout the house were designed by Kaplan Gehring McCarroll Architectural Lighting and are controlled by Crestron components; the windows and doors are from Metal Window Corp.; and the glazing is from Giroux Glass, which provided the laminated glass for the Skywalk observation deck that cantilevers 4,000 feet above Arizona’s Grand Canyon.

Full Circle | Separated by pocket doors from the more formal living area, the parlor was designed as a relaxing retreat. “The homeowner, who loves to entertain, wanted a place for everyone and everything,” says Phoenix. “For this room, he wanted his guests to be able to sit and watch TV by the fire.” The designer made the fireplace a focal point, surrounding it with mosaic onyx tile from Waterworks that, says Landry, “gives great movement to the space.” Employing a technique he used in many other rooms in the house, Landry pulled the ceiling away from the walls and installed cove lighting to illuminate it from above; the effect is an understated glow (“an important detail,” he says). The custom coffee table is from Paul Ferrante; the sofas, by Christian Grevstad, were purchased from Mimi London.

Nearby, the Landry-designed, spinelike staircase spans the main house’s four floors, from the garage to the roof terrace. “It took a year to make, and the builders worked relentlessly to get it right,” Phoenix says of the sweeping form, which is freestanding—it does not touch the walls at any point. He complemented the stairway’s limestone steps with nickel-plated rock-crystal sconces of his own design and selected the chandelier from Moura Starr. “It reminds me of balloons floating at the top of this huge tower,” says Phoenix.

Eat, Play, Love | The intimately scaled library serves as a favorite hideaway for the homeowner. Zebrawood panels sheathe the library’s walls save for the fireplace surround, which is covered in Italian-glass mosaic tiles from Bisazza. Michael Berman club chairs encircle a table by Donghia; hovering overhead is a light fixture by PaganiStudio. For the informal game room, which leads to the home theater and a small recording studio, the homeowner requested the sunken conversation area near the fireplace. Phoenix added a generously sized games table covered in Edelman Leather and hung above it a rock-crystal fixture from Wired Custom Lighting.

The first piece that Phoenix selected for the dining room was the zebrawood-and-bronze table from David Sutherland, which comfortably seats 14 people. “It weighs 3,000 pounds, and it took 12 men to haul it into the home,” he says. Rounding out the space, where the homeowner and his family have most of their meals together, is an untitled 1964 oil by Lorser Feitelson; a 2007 chromogenic print, Frigido Ferragosto 2, by Massimo Vitali; and a Moura Starr chandelier.

Master’s Decree | In the master suite (previous pages), which includes a vestibule as well as dressing and sitting areas, a sense of serenity and privacy was key to the design. Therefore the architect and designer introduced bleached-zebrawood paneling, and a fireplace from Spark Modern Fires surrounded by backlit honey onyx from Rubin Marble & Granite. “At night, the bedroom has this beautiful glow to it, like a piece of art,” says Phoenix. “It’s like being inside a jewel box.” The bed was custom-made for the homeowner, as was the zebrawood cabinet, which contains a flat-panel television that rises and descends with the touch of a button.

During the home’s design process, Landry and project architect Todd Riley rented a cherry picker to raise them to the exact height at which the master bathroom would eventually be built. From their vantage point atop the crane, they videotaped the 180-degree view, which encompasses skyline and ocean, and sent the video to the homeowner, who says he is “particularly happy with the master suite.” The designer continued the zebrawood in the vanity and mirrors—striking contrasts to the white onyx walls and floor. The fixtures are from Dornbracht’s Mem line.

Down Time | “We had carte blanche to design the ultimate spa for the homeowner,” says Phoenix. For this downstairs space, which is adjacent to the gym, Landry designed a Venetian-plastered elliptical soffit ceiling to maintain a light ambience. Materials and furnishings include white marble; Bisazza tiles; George Cameron Nash club chairs covered in white terry cloth from Perennials, and a console table from Nash’s Cameron Collection; and John Boone cube stools. “So many people go with dark colors for the spa,” says Landry. “We thought, ‘Let’s make it bright, airy, and fun, without making it too clinical.’ ”

In accordance with the homeowner’s wishes, the team incorporated a pair of private massage rooms, a custom Landry-designed cold/hot whirlpool bath, and both wet and dry saunas. They also added surprises, such as a gently cascading waterfall wall and chromatherapy lights in the bath. “[The homeowner] has the entire color wheel to choose from,” says Landry. “He can turn down the main lights and change the whole mood of the spa. It’s a real destination.” The recessed fixtures in this room and throughout the home are from No. 8 Lighting.

Let It Flow | The roof terrace overlooks the pool and barbecue terrace (opposite).

“We particularly enjoy the roof terrace at night because of the fantastic view of the city lights,” says the homeowner, who was hands-on in planning the outdoor kitchen on the lower terrace, where he likes to host larger gatherings of friends and family. Landry collaborated with H20 Pool & Spa on the zero-edge pool, which flows into a tiled area fitted with fiber-optic uplights that can be programmed to change color. A Baja shelf designed for wading juts into the pool and makes for an easy transition to the spa.

“This is California—everyone wants to be outside,” says Landry, who made sure that the view back toward the house from the pool was just as spectacular by continuing the stucco treatment onto the rear facade and illuminating the home so that it glows like a lantern atop the hill.

When the occasion calls for escaping the sun and ducking into the recreation room, the homeowner and his guests have convenient access to extra seating, a pool table, a bar, and a movie screen. “The entertainment rooms work very well for our lifestyle,” he says. “He could convert this room to a discotheque if he wanted to,” adds Landry, who situated the room within its own separate building. Phoenix acquired the tables and chairs at David Sutherland, wrapped the bar in custom Italian mosaic leather from Innovations, and had the carpet custom-made by Stark.

Open Air | In collaboration with Water Studio, Landry designed the bronze fire-and-water feature at one end of a footpath extending from the home’s side elevation. On the path, the homeowner can continue downstairs to the terraced orchard, which he asked for so that he could pick his own fruit each morning. The circular room, located just beyond the gym and spa, features a teak ceiling; the room’s furniture, also teak, is from David Sutherland.

Elsewhere on the property, adjacent to the living room, is a heated loggia (left) that serves as an open-air living and dining room for the homeowner and his guests. Embedded within the fireplace wall, which features slabs of book-matched onyx that carry over from the living room, is a flat-panel television. “It is meant to look like one solid block of stone,” says Landry.

“The owner was completely open to our ideas, and he entrusted us with so much of the design, which was very rewarding,” continues Landry. “I think we hit it right on.” Indeed: In the months since the house was finished, the homeowner has settled right in. “We are very happy with the open feeling that the house has,” he says. “This is exactly what we were looking for.”