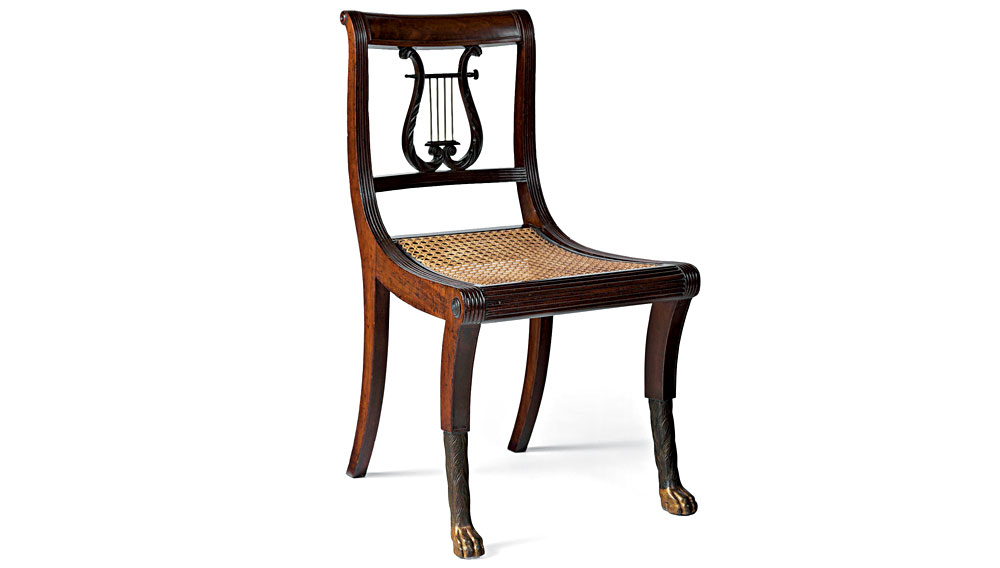 Most American-furniture dealers would love to be saddled with Carswell Berlin’s dilemma. The president of the Carswell Rush Berlin gallery in New York has a bed, a card table, and other furnishings attributed to Duncan Phyfe, the illustrious 19th-century American furniture maker. The problem for Berlin is figuring out how to display all of the pieces at the next Winter Antiques Show, which takes place January 20 through 29 at the Park Avenue Armory on Manhattan’s Upper East Side. “I will have as many [pieces] as I can on hand,” Berlin says of his inventory, most of which was commissioned to beautify the homes of the emerging elite in the Northeast and the South. “I will fill at least half my booth.”

The finest examples of Phyfe furnishings are scarce, but with the antiques show and two upcoming exhibits, they will be in relative abundance in New York over the next few months.

Elizabeth Feld of the Hirschl & Adler gallery in midtown Manhattan, another Winter Antiques Show exhibitor, is preparing to open The World of Duncan Phyfe: The Arts of New York, 1800–1847 at the gallery on December 15; the show will continue through February 17. Nearly all of the objects she plans to display are for sale, including a set of 16 circa-1835 mahogany dining chairs documented by Phyfe and priced at $285,000. Feld explains that the exhibit will place Phyfe’s work in context. “We’re trying to show what else was going on at that time,” she says, “what was happening in the Phyfe workshop, what his competitors were doing, what decorative arts were in New York homes.”

In addition to displaying their Phyfe wares at the Winter Antiques Show and in their showrooms, the Carswell Rush Berlin and Hirschl & Adler galleries have loaned pieces to the Metropolitan Museum of Art for Duncan Phyfe: Master Cabinetmaker in New York, which opens December 20 and will run through early May. The exhibit—the first Phyfe retrospective in nine decades—will spotlight the Scottish immigrant’s career, which spans from the end of the 18th century to 1847, when he retired. (Phyfe died seven years later, at age 86.) “We’re dealing with a man who had a career over 45 years. That’s a long time, and he did a lot of work in that time frame,” says Peter Kenny, curator of American decorative arts at the Met and the Phyfe exhibit’s cocurator. “I think we have created an accurate depiction of how his style changed over time.”

Phyfe’s workshop produced hundreds of pieces, but only nine bear authentic labels, and those labels are made of paper. Additional pieces have been credibly linked to Phyfe through bills of sale and other documents, but they account for only a fraction of his output. Most Phyfe furniture is described as “attributed to” him.

What looks like Phyfe’s work is not necessarily his. Phyfe’s role as a New York tastemaker drove competitors to emulate and sometimes steal his designs. Kenny speculates that Phyfe saw merit in not marking his work. “Sometimes it’s to your advantage to have people copy,” Kenny says. “If everybody looks like you, it’s almost an advertisement for you.”