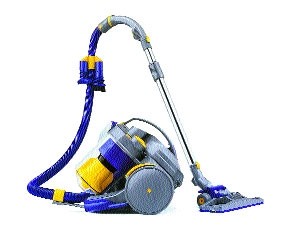 If it seems too much of a stretch to consider the workhorse vacuum cleaner as an art object, a walk through the recent exhibition A Century of Design, Part IV: 1975–2000 at New York’s Metropolitan Museum of Art would have changed your mind. Amid the sleek art glass vessels and architectural coffeepots, the Dyson Dual Cyclone lay in repose, coiled like a cobra in a yellow, red, and blue Mondrianesque skin.

This floor-sweeping piece of art was the world’s first bagless vacuum cleaner, and its revolutionary cyclonic suction system was a milestone innovation. Don’t look for it in the museum gift shop, however. Dysons are not yet available in North America, but there are plans to expand the production and distribution of the highly stylish, environmentally friendly, and superefficient vacs later this year.

After introducing the DC in 1993, James Dyson won the prestigious European Design Prize in 1997, the first Brit to do so. The vacuum cleaners are now top sellers in Japan and Britain, where they retail for almost $400. The Limited Edition, in purple and magenta, sells for slightly more, and the company donates part of the profits to meningitis research.

The Swedish Electrolux vacuum cleaner is also a classic of early modern design. Introduced in 1912, it was the first canister type, as opposed to the upright shape of the Hoover. But now Electrolux is squarely in the third millennium with the latest in vacuum cleaning technology: the robot cleaner.

Electrolux’s little red Trilobite maneuvers itself around the room via ultrasound sensing, cleaning as it goes. The Trilobite, which sells for 1,500 euros ($1,300) is not available in the United States, but Electrolux’s Eureka models are. The Eureka WhirlWind Ultra ($180 to $300), a bagless upright with transparent panels and brightly colored accents, illustrates the iMac influence on vacuum cleaner design.

As with the computer, the WhirlWind’s transparent case reveals the high-tech system working inside, reassuring you that plenty of dirt-sucking power resides beneath that stylish exterior.

Hoover unveiled its robotic prototype this winter, but its premium model is the self-propelled WindTunnel bagless upright ($400). The blue metallic flake coating should appeal to the hot rod lover in us all.