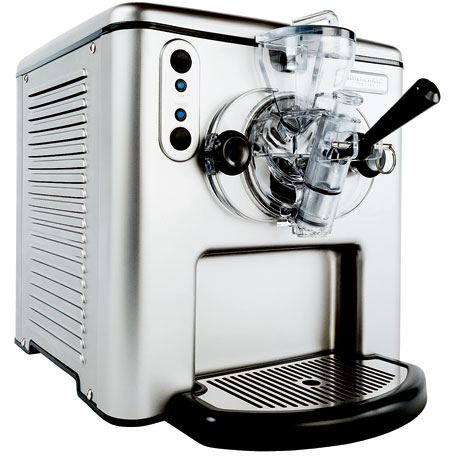 In 1919, 11 years after creating the first commercial mixer, Hobart Manufacturing Co. built a home version featuring a unique mixing action that prompted one enthusiastic tester to exclaim, “It was the best kitchen aid I’ve ever had!” Such were the beginnings of Hobart’s KitchenAid trademark, which has become an archetype for kitchen equipment worldwide.

The streamline design of KitchenAid’s mixers and coffee grinders has changed little since Egmont Arens—former Vanity Fair art editor and one of the cofounders of the Society of Industrial Designers—was commissioned to design three new models in 1937.

“Interestingly enough,” says Brian Maynard, KitchenAid brand director, “Arens was a proponent of planned obsolescence.” His intentions notwithstanding, Arens’ designs proved so immune to the whims of consumer taste that, more than 60 years later, the sensual curves and powerful performance of his classic KitchenAid K5 stand mixer served as a springboard for the company’s latest endeavor: the Pro Line series. This innovative group of professional-caliber appliances sports a similar industrial profile but with an aesthetic of its own, one that Maynard describes as a “soft” commercial look.

“This is our paradigm line,” explains Maynard. “We have taken the best of what we know and put it into these products.” Indeed, features such as the cooktop’s 18,000 Btu burner with reversible wok ring and the refrigerator’s precise viewable controls contribute to the collection’s culinary appeal. A TLC (Total Legendary Care) service package accompanies the large appliances, but what really sets Pro Line apart is its bold appearance. “It was designed to be sold as a suite,” Maynard says. “It’s intended for people who are interested in something different, something that is going to make a statement about their kitchen and the kind of cook they are.”

Seattle-based interior designer Steven Hensel is especially intrigued by the finishes. Everything is available in either stainless steel or a rich matte metallic gray, dubbed Meteorite, trimmed with stainless. “I would pair the Meteorite with concrete countertops and maybe a dark cherry cabinet,” he says. “I’m also tempted to use a rich bronze with it. It’s the ultimate finish.”

Such finishes demand to be displayed, not hidden, as has been the trend in appliance design. “This, to me, is very much about a style and attention to detail that would appeal to a client who probably wears an Armani suit and picks all of his or her accessories very carefully,” Hensel adds. “The fact that there are integrated countertop appliances will also appeal to that client—a very meticulous, style-conscious client.”